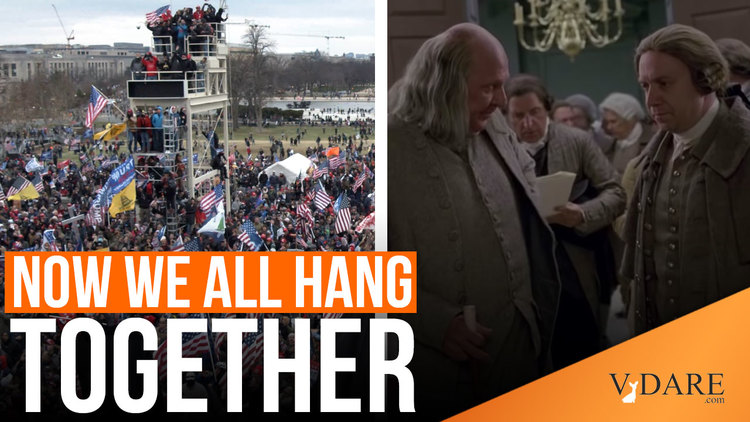 US Capitol Protest: Ruling Class Tantrum Shows Americans We Must All Hang Together

Power can only be checked by power, and because President Donald J. Trump and the Conservative Movement™ didn’t oppose the emerging Totalitarian Left when they had the chance, the Historic American Nation is about to suffer real tyranny under the boot of our corporate and political rulers. The good news: the Capitol Hill protest and its subsequent repression was another step in the radicalization, not of the Dissident Right, which already knows the score only too well, but of the mass of ordinary American patriots.

President Trump is receiving the Alex Jones treatment, having lost access to social media and his email service. As usual, deluded Conservatism Inc. types have no clue how to respond, limiting themselves to impotent wailing or (incredibly) demands for even more censorship, just directed against foreign governments [After Censoring Trump, Twitter Lets China Call Genocide Targets ‘Emancipated,’ by Ryan Glasspiegel, Outkick, January 7, 2021]. In D.C., an ominous “domestic terrorism law” appears to be on the way, solely focused on white men and utterly ignoring BLM and Antifa [What Experts on Extremism Want From the Biden Administration by James D. Walsh, NYMAG, January 8, 2021].

Still, there’s hope to be found in this situation because progressives aren’t leaving ordinary Americans any way out. There are no more “conservatives” because there’s nothing left to conserve. There are just patriots on the one hand and collaborators with an increasingly hostile and hateful regime on the other.

The “slippery slope” argument may be considered a logical fallacy, but in politics, it’s simply a factual description of the way things work. The Capitol Hill protest is simply providing the excuse for the crackdown that was already underway anyway.

One interesting thing about the Stop The Steal protest is that many of the “hard Right,” e.g. Hunter Wallace of Occidental Dissent did not go—for two reasons:

They had no illusions that POTUS was going to suddenly spring a trap on his enemies or metaphorically cross the Rubicon and become an American Caesar. If Trump had been a Caesar to begin with, he wouldn’t be in this position.

They knew the laws would be selectively enforced, that those who participated would be hunted down and persecuted, and that they could well be labeled “terrorists” simply for being around the event.

In other words, the “hard Right” has already given up on the American system, knows this is not a free country, and has no illusions that the Constitution still applies.

Thus even the most “militant” wing of the Trump movement, the ostentatiously multiracial Alt-Lite Proud Boys, had their (black) leader arrested and banned from the city and from what I can tell were not at the rally in force [Judge bans Proud Boys leader from Washington D.C., after arrest, AP, January 5, 2020].

In contrast, most of those who attended Wednesday protest—in numbers vastly larger than attended Charlottesville—still believed in America. They were normal American patriots who thought the flag, the Constitution, and America’s historic identity still meant something.

This includes the late Ashli Babbitt, a young, unarmed white woman gunned down by the police and whose death has been contemptuously ignored by most, except those who cackle that she had it coming [ A Martyr for the Historic American Nation—Ashli Babbitt, by Gregory Hood, January 8, 2020].

Thus, American patriots are confused. They still have it in their head that the U.S. is something called a “free country” and that they have the right to speak out about what is happening. They are now being enlightened about the fact that this is no longer true.

In recent months, the social media app Parler became the gathering place for the MAGA movement, with some of the politicians and commentators who are scared off by MSM anathemas against Andrew Torba’s genuinely free-speech app Gab going there instead. However, Google Play just removed Parler from its App store, and Apple is probably next [Right-wing social media app Parler removed from Google Play store, Apple threatens removal, by Rachel Matz, ABC7, January 9, 2020]. Amazon was pressured to cut ties with Parler by its own employees, namely by cutting it off from its cloud hosting platform [Amazon employees call for company to cut ties with Parler after deadly U.S. Capitol riot, by Annie Palmer, CNBC, January 9, 2020]. (According to EndGadget, it has now done so: Amazon is cutting off Parler's servers, January 9, 2021).

The corporations that benefitted the most from President Trump’s conservative economic policies have lost no time blasting the president and his supporters [Companies backed Trump for years. Now they’re facing a reckoning after the attack on the Capitol, by Todd Frankel, Jeff Stein, Jenna McGregor, and Jonathon O’Connell, Washington Post, January 8, 2020].

This is a far different reaction than what we saw after months of Black Lives Matter riots, where various foundations received over $35 billion in grants and pledges from corporate America [Companies have promised $35 billion toward racial equality. Where is the money going? by Lauren Weber, Wall Street Journal, December 21, 2020].

It’s also very unlikely that Conservatism Inc. can rethink its slavish attitude towards corporate America. In an article that truly defies parody, National Review tells us that the “cure for Trumpism” is “Reaganism,” ignoring that Reagan wouldn’t come within 30 points of being elected California governor today because of the demographic changes unleashed by his 1986 amnesty [The Cure for Trumpism? Reaganism, by Frank Lavin, January 7, 2021]. (He probably wouldn’t be allowed on Twitter either, considering some of his Politically Incorrect statements.)

Let’s say Twitter does ban the Ayatollahs. So what? It’s not the Iranian government that’s threatening America’s liberty. It’s the American government.

Thus Senator Dick Durbin is apparently going to reintroduce his anti-white “Domestic Terrorism Prevention Act” [Senator Dick Durbin plans to reintroduce domestic terrorism bill in wake of Capitol Hill attack, ABC7, January 8, 2021]. The bill begins by claiming that “White supremacists and other far-right-wing extremists are the most significant domestic terrorism threat facing the United States.” It outlines several measures, including a mandatory domestic terrorism office, mandatory trainings, mandatory screening for “infiltration” of the uniformed services (i.e. purging the military and police of any conservatives), and various task forces and “fusion centers” to enforce the above [S. 894–116th Congress (2019-220), March 27, 2019].

Needless to say, the massive urban violence unleashed since the George Floyd riots around the country is not mentioned in Durbin’s legislation. No one will be held accountable for even the worst of those riots.

We can argue that this is the culmination of the selective law enforcement that began when those in power decided to ignore mass illegal immigration. Anarcho-tyranny was inevitable.

However, remember that if you speak a little too angrily about American cities being burned to the ground, you will be the one dragged in:

(I’ll save you the trouble–I wasn’t in the Capitol and I’m not the Viking guy, but here’s an interview with him [The ‘Q Shaman’ on Why He Stormed the Capitol Dressed as a Viking, by Ryan Mills, National Review, January 8, 2021].)

Whatever could justify such extraordinary tactics? Well, the Washington Post tells us that nothing less than preventing the rise of Nazism is at stake (surely a curious comparison to an Administration that has been more pro-Israel than any other in American history) [Pre-Nazi Germany tells us the fight to save American democracy is just beginning, by Michael Brenner, January 9, 2021]. And ABC’s news director Rick Klein talked about “cleansing” the country of the movement Trump created.

Political Director for @ABC News based in Washington DC appears to have deleted his tweet about the 75 million Americans who voted for Trump that talked about the challenge of "cleansing the movement." pic.twitter.com/HS1Rwrn94S

Now, with both media fanaticism and state power joined together, America’s emerging Totalitarian Left have the tools to “cleanse” America. It will wield the state power that Trump and cowardly conservatives refused to touch for four years.

Why then am I optimistic?

Yes, it will be tiresome having to master decentralized blockchains and various obscure technologies just to communicate. It will be stressful dealing with the constant threat of violence from the System or the System’s militant wing. But the whole process is forcing us to adapt to hostile conditions, something we should have been doing anyway. (It’s why VDARE.com has bought a castle.)

And I think that it has to be this way. The logic of the Democrat/MSM hysteria is that there must be an ever-greater number of kulak-style enemies to be demonized and deplatformed. However, if you do that to enough people, deplatforming loses its sting.

It’s also mentally freeing us from having a stake in what goes on in Washington D.C. I don’t care about the various games our rulers are playing in the Middle East, the Pacific, and Eastern Europe. I love my country, but the Potomac Regime has very little to do with that country [Men Without A Country, by Addison Del Mastro, American Conservative, November 21, 2020].

Where others see despair, I see a crucible, something that will pave the way for a true national rebirth. We are the heirs of those who endured Valley Forge. Greatness can emerge only from struggle.

With its absurd talk of “insurrection” and ludicrously obvious double standards, the Ruling Class has designated tens of millions of deplorables as something less than citizens, people outside respectable society.

It’s a mistake. Our rulers need us. We don’t need them.

Like I’ve always said, I’m a short-term pessimist. This week’s events may look like a tactical set-back. But it’s just speeding something up that was happening anyway. The Left just can’t hold itself back from its eliminationist rhetoric and its borderline genocidal hatred of the Historic American Nation.

My advice to VDARE.com readers: obey the law. Don’t say crazy stuff. Don’t give them an excuse.

But in the end, no matter what we do, millions of Americans are about to feel the iron boot of repression—something we at VDARE.com have been dealing with for some time.

Nevertheless, my guess is a lot of us are going to look at each other, as American patriots did after George III responded to their Olive Branch Petition by declaring them traitors subject to the death penalty, and conclude that whatever our differences, “Now we will all hang together, or most assuredly we shall all hang separately.” (See Benjamin Franklin in the clip.)

In the end, I think that will be enough to win.