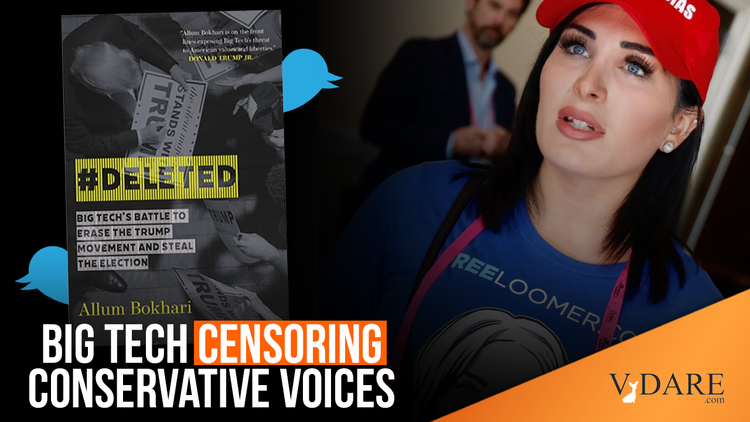 Earlier (2019): “I BEGGED PRESIDENT TRUMP TO DO SOMETHING BEFORE IT WAS TOO LATE!” Laura Loomer Appeals To Trump On Tech Totalitarianism (Which Also Threatens VDARE.com)

Laura Loomer was right! She was deplatformed by Twitter and Big Tech but turned it into a central plank in her congressional run. However, even after she won the GOP primary in President Trump’s own district, Big Tech arrogantly maintained its ban. And GOP politicians who are considered strong on this issue—like Senator Josh Hawley—remained silent [Laura Loomer Blasts Republican Party Leadership for Being Hypocrites Who Are ‘All Talk, No Action’ on censorship, by Cassandra Fairbanks, Gateway Pundit, October 14, 2020]. The GOP was similarly silent when Twitter suspended GOP Delaware Senate nominee and immigration moratorium supporter Lauren Witzke:

So, naturally, Big Tech has moved on to censoring the President himself and launching an unprecedented effort to repress new evidence that Democrat Presidential candidate Joe Biden cooperated with his son Hunter’s influence peddling [Twitter Censors Again: Blocks Second New York Post Story On Hunter Biden Seeking Cash From Chinese Firm, by Jordan Davidson, The Federalist, October 15, 2020]. This problem is not going away.

Which is good news for Allum Bokhari and his vital new book #Deleted: Big Tech’s Battle to Erase the Trump Movement and Steal the Election. Right now, Twitter and Facebook are openly flaunting their power. These companies have the power not just to suppress information but to shape it, determining culture from the top down. Time is almost out for President Trump. However, he’s been handed a gift for the closing argument of the campaign.

As Bokhari notes, tech giants weren’t just shocked after Donald Trump’s 2016 victory. They were horrified that their companies might have enabled his successful campaign. In 2018, a whistleblower sent Bokhari a Google document entitled “The Good Censor,” which “admits that Google, Facebook, and Twitter now ‘control the majority of online conversations.’” It described free speech as a “social, economic, and political weapon,” one which must be controlled to allow for “rational debate.”

Of course, this means that tech companies themselves get to decide what is “rational” and permissible to say, and what is not. Bokhari reports that in December 2016, Facebook had already set up task force to remove “fake news.” Just a month later, Randall Rothenberg of the Interactive Advertising Bureau told tech executives to work together to remove “hatred” and “fake news.” Around the same time, the Leftist thug group Media Matters was boasting it was having an impact on Google, Facebook and other companies. Media Matters also vowed that it would make sure social media companies could no longer “uncritically and without consequence host and enrich fake news sites and propogandists” [Read the Confidential David Brock Memo Outlining Plans to Attack Trump, by Joe Schoffstall, Washington Free Beacon, January 26, 2020].

Bokhari makes a defense of partisanship that James Burnham would recognize: Ultimately, liberty and truth are the byproducts of competition and clashing powers. Bokhari argues that conflict is necessary to discover truth. Only by allowing partisan media to fact-check and argue with each other can we discover new information and break out of our own confirmation bias.

[I]f you slip into right-wing extremism, you are likely to be totally ostracized, excluded from polite society, and unable to earn a living. Tech platforms will ban you; payment processors will refuse you service; advertising networks will pull out of your website [whereas] if you slip into left-wing extremism, that is, communism, you can go on to have a very successful career as a college professor, author or podcast host. And if you get things factually wrong? You’re a conspiracy theorist, a ‘Pizzagater,’ a misinformation peddler. [Links added]

Conservatives don’t often use this defense, but the late maverick Leftist Christopher Hitchens made a similar argument when he defended free speech, even for the most extreme views. He argued that outrageous views not only deserve free speech, but extra protection. One wonders when Slate, The Atlantic, and Vanity Fair will get around to purging his archives.

However, “bias” is not what is terrifying about Big Tech. What is truly remarkable is the way Google/YouTube and other companies have limited speech and changed language itself in the name of “safety.” As Michael Rectenwald showed in Google Archipelago, Big Tech possesses near total control over human information, including what people are and are not allowed to see.

It only remains to invent a justification for censorship, which the Left does well. “The Left excels at inventing new terminology to demonize its political opponents,” Bokhari writes, “and then uses its new, invented labels to get them censored and deplatformed.”

Thus, tech companies continuously expand what counts as “Harassment” and “Hate Speech.” This supposed “danger” provides the justification for Leftists to pressure private corporations into banning an ever greater number of nationalist and conservative commentators.

“[A] survey of political and social behavior conducted after the 2016 election found that Democratic women were more than twice as likely as the average American to block or unfriend someone on social media because of a political disagreement,” Bokhari notes.

If a social media company responds to complaints, those who are the most easily offended have the most power.

Indeed, we saw this happen just a few days ago, when the term “sexual preference” went from approved Politically Correct term to wildly offensive within a day, just so Congress could force prospective Supreme Court justice Amy Coney Barrett to grovel [Merriam-Webster changes its definition of ‘sexual preference’ as Barrett gets called out for using term, by Morgan Phillips, Fox News, October 14, 2020].

Whether Leftists are sincerely offended or acting in bad faith is irrelevant. Either way, conservatives end up being deplatformed or cowed by whatever new rules Leftists just invented.

By far, the most chilling section of Bokhari’s book is the chapter which shares the title—Deleted. Twitter and YouTube remove videos that investigate their own conduct. Numerous commentators who played an important part in the 2016 election—including Alex Jones, Milo Yiannopoulos, Gavin McInnes, and others—have been banned on several platforms. Bokhari points out that in some cases, media outlets or commentators were banned only after “Democratic politicians and mainstream media reporters… agitated” for them. “When the silencing of those voices is added to the countless banned grassroots Trump supporters who lack the clout or connections wielded by major media figures,” he writes, “the collective impact is enormous.”

It’s not just Twitter or even social media. Patreon deplatformed Lauren Southern for supposedly endangering the lives of migrants, a ludicrous charge but one that served to hamper her work.

Leftists know what they are doing. By banning influential figures who can “serve as network hubs for a larger movement” they are stripping away the foundation of any political campaign.  In 2016, President Trump owned Twitter. In 2020, the bluechecks do.

Bokhari has the courage to use a term I think Peter Brimelow came up with—“hate facts.” Specifically, Bokhari highlights a case where the courageous citizen journalist Andy Ngo tweeted pointing out that the U.S. “is one of the safest countries for trans people,” that the murder rate is higher for the “cis population,” and that “black men” are disproportionately responsible for murders. Which was true, but Twitter locked Ngo out of his account until he deleted the tweet.

Andy Ngo puts himself at great physical risk to show what is happening during “peaceful protests.” Leftists would clearly be delighted if he were banned completely.

Of course, if even winning a primary isn’t enough to be allowed on the platform. The next question is: will Twitter eventually ban President Donald Trump? It presumably won’t while he is in office. However, one could easily see Twitter banning him for citing any number of “Hate Facts” once he no longer has power.

You would expect the Left would have toned down its censorship before an election that President Trump appears to be losing. But the fact is that they just can’t help themselves. Thus Twitter could not resist censoring even the New York Post and the president’s official twitter account.

And note that this censorship was then cited by the Biden campaign as evidence the story was false [Joe Biden Campaign Claims New York Post Hunter Biden Article ‘False’ Because Twitter Censored It, by Sean Moran, Breitbart, October 15, 2020]. Thus, not only is Twitter serving as an arbiter of who can speak, it is becoming a de facto Ministry of Truth, determining the party line on controversial issues in an election year. When we see that CEO Jack Dorsey is donating $10 million to the ferociously anti-white Ibram X. Kendi, we can see how this will end for all of us who still have an account.

Luckily, it does seem that some action is forthcoming. FCC Chairman Ajit Pai says he will be “clarifying” Section 230 of the Communications Act, which could potentially strip social media sites of liability protections unless they stop acting like publishers.

I intend to move forward with an @FCC rulemaking to clarify the meaning of #Section230.

Read my full statement below. pic.twitter.com/LhUz5XMdSC

However, this is just the start. The Senate Commerce Committee, led by Republican Roger Wicker of Mississippi, has not yet even scheduled hearings for Nathan Simington, President Trump’s nominee for the FCC. Simington is another social media hawk who can be expected to hold Big Tech accountable—possibly the same reason that donor-driven Republican Senators don’t want him confirmed [GOP Sen. Roger Wicker Has Not Scheduled Confirmation Hearing For Trump FCC Nominee Crucial To Talking On Big Tech, by Allum Bokhari, Breitbart, October 8, 2020]

As Bokhari points out, it’s very difficult to “build your own platform.” But even those companies that have tried to build their own platform, notably Andrew Torba’s Gab, suffer political harassment in the shape the loss of payment processors, servers, the domain-name, and all the other basic infrastructure that any Internet user relies on.

The Internet itself, Bokhari explained, is built in a way that makes it vulnerable to centralization. In time, the blockchain may allow for alternatives to be created. However, in the current situation, dissidents are like a customer who is cut off from electricity because the power company disagrees with your politics.

Perhaps patriots need to start thinking about social media platforms as natural monopolies, and thus, utilities. Reinterpreting Section 230 of the Communications Act is a start, but it’s not enough. Big Tech poses a unique challenge not just to dissidents and small businesses. It poses a challenge to democracy itself.

If private interests can determine what information people can see, then they rule. My view: if it is too messy to break them up, they should be run as semi-public utilities. To paraphrase what was once said about big banks, Big Tech is too large to be allowed to exist without being under state control.

Every American should enjoy the right to free speech on these platforms. Platform access isn’t just basic fairness, but a civil right. Bokhari’s #Deleted makes a powerful, persuasive case about what’s at stake.

If President Trump wants to keep his Twitter account, let alone the White House—and if Americans want to survive the totalitarian storm that will come if Biden wins—we all need to think carefully about Bokhari’s warning.