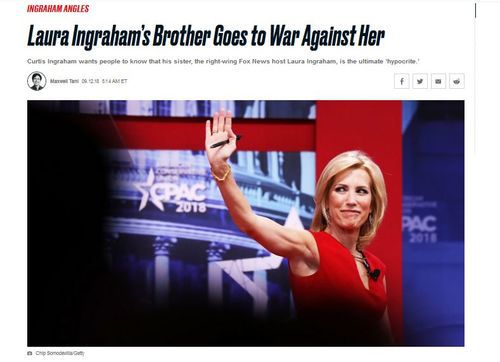 A journalist’s job is to speak power to truth, to protect the Narrative, and to suppress dissent. Without journalists, Americans would have greater knowledge of public affairs, have more free speech, and enjoy a more elevated public discourse. Unfortunately, like roaches, flesh eating bacteria, and Amy Schumer, journalists exist and all our lives are worse as a result. And they spend an increasing amount of time looking for family members or former friends and romantic partners of conservatives and nationalists that they can weaponize against their targets. (Or, in Stephen Miller’s case, they use a childhood rabbi.)

The latest victim is the heroic Laura Ingraham, who was just denounced by her own brother, Curtis. Needless to say, The Daily Beast is on the case, giving Curtis a platform to call his sister a “monster” who questions her “very humanity.” He’s also working to try to deplatform her by pressuring sponsors of her show. He’s also called his father a “Nazi sympathizer.” [Laura Ingraham Brother Goes To War Against Her, by Maxwell Tani, September 12, 2018]

Needless to say, he claims he’s sad about the country’s “divisive state.” That tends to happen when you call people who disagree with you Nazis, monsters, and inhuman. In contrast, Laura Ingraham’s response was all class, saying that “My siblings and I are shocked and saddened to learn of these false and hurtful online postings. Although we’ve been estranged from him for many years, we love our brother and miss him very much.”

Now, Mr. Ingraham has no real opinions, identity, or views. One can tell from his sloganeering and #Resistance rhetoric that there’s not really anything there. He’s what we call an NPC—an empty vessel that consists of a brain stem and some rudimentary mental functions capable of recycling slogans heard in other places. What he actually has to say is of little importance, because it could be anything depending on what his electronic television friends tell him. Next week, we could be “monsters” because we eat meat, or drive non-electric cars, or celebrate Christmas. No one knows what the Left will decree is unacceptable next or what newly invented taboo the Beltway Right will grovel before.

However, it tells you something about our time that so many are eager, even gleeful, to violate private trust or sabotage relationships that should be taken for granted, like those of family. As people lose their real identity and nation, faith, and family decline in importance, deracinated individuals derive meaning and purpose from their perceived status in the mass media, which itself is derived from their adherence to a certain ideology. One is reminded of the cult surrounding Pavlik Morozov, a Soviet boy who supposedly denounced his own father for political crimes. Though the state turned him into a hero, even Stalin supposedly called him a “little swine for his actions.”

Commenting on this phenomenon, Gregory Hood at American Renaissance writes:

[W]e recognize identity is not entirely self-created and we are born with certain duties that cannot be renounced without renouncing ourselves. Those who so lightly discard these primordial commitments are incomplete; their identity, values, and happiness are dependent on the opinions of people they don’t even know. Certain relationships are sacred. Even Stalin knew we shouldn’t take moral guidance from “little swine.”

Or for that matter, from journalists.