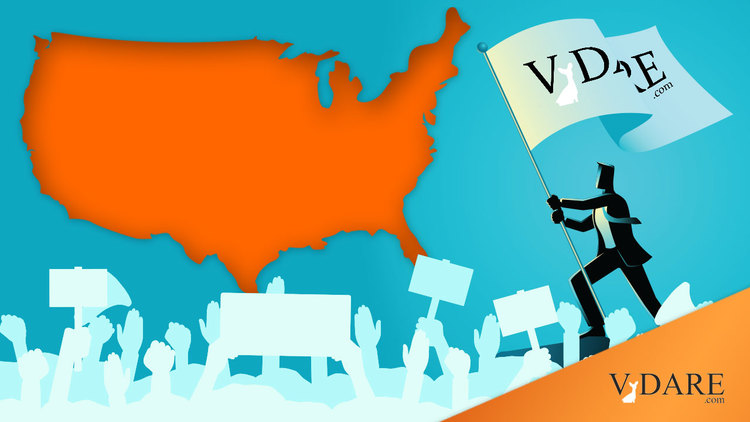 “Doomed”? That’s Why VDARE Has Bought A Castle!

Earlier, by Lydia Brimelow: We Got The Keys To The Castle!

President-per-media Joe Biden says America is “doomed” if it can’t make progress on race, but things look certain to get worse. The consequences of Black Lives Matter have been soaring murder rates in cities and a massive wealth transfer to those who have an interest in fostering racial division. Without exception, every major economic, cultural and political institution in America is pushing for an anti-white racial caste system while simultaneously encouraging mass Third World immigration. The debacle over the recent COVID-19 stimulus payments shows that America is something of an afterthought to our own government, even in a time of national crisis. Enoch Powell warned about a nation “busily engaged in heaping up its own funeral pyre” but we are beyond that. The fire burned out in the 2020 election. We are standing in the ashes, looking for a way forward. And the only way forward is us.

Biden’s talk of “unity” simply can’t square with a permanent Cultural Revolution against the Historic American Nation’s history, heroes, and culture.  Biden now says “give each other a chance” and end “this grim era of demonization in America” [As President-Elect Joe Biden Doubles Down On Calls For Unity, Supporters Have Doubts, NPR, November 26, 2020]. But he began his campaign with the Charlottesville Hoax, claiming President Trump sided with “white supremacists,” who were of course responsible for all the violence.

It’s also worth noting that President Trump was mocked back then for warning that the removal of Robert E. Lee would lead to the removal of the Founding Fathers [Trump equates Confederate generals Robert E. Lee and Stonewall Jackson with George Washington in bizarre press conference, by Sonam Smith, Business Insider, August 15, 2017]. Now, of course, we’re way past that—even Lincoln is on the chopping block.

Maybe Biden’s bumbling, mumbling, “Slow Joe” operation is what many Americans want. He’s the goofy, harmless old white man the Main Stream Media has been promoting for decades. He’s a comforting face who can calmly preside over American decline while still paying tribute to vague sense of national unity.

However, I doubt this can last even with nigh-unanimous MSM support. Biden said that President Trump was more like “George Wallace than George Washington” [More George Wallace Than George Washington, News18, July 21, 2019]. He’s right, but not in the way he thinks. Wallace actually developed a certain rapport with blacks, winning elections in Alabama well after the end of desegregation. Was George Washington a racial egalitarian? If not, doesn’t it follow his monuments have to come down too?

At 78, Biden doesn’t understand the era he lives in. His own career was well underway when Wallace was still a powerful political figure. Like many liberals of his generation, Biden assumes he can save the Founders and the traditional symbols of the country while keeping anti-racism as our foremost moral value. Of course, given the Founders' true beliefs on race, culture and immigration, such an effort is as doomed as trying to re-invent Martin Luther King as a conservative icon.

With the 1619 Project being taught in schools, books about white privilege topping the best-seller lists, and corporate America pushing diversity quotas, America is radicalizing its own elite into hating the country, its history, its people, and its institutions. Does anyone believe Biden, whom Steve Sailer has compared to the ailing Hindenburg, can check this radicalism?

The key problem is that no one in the Ruling Class has an interest in stopping social collapse. Because of mass demographic transformation and the concrete incentives created by Affirmative Action, U.S. elites and aspiring elites have no reason to identify with men like Washington, Jefferson, Lincoln or even Teddy Roosevelt. Indeed, Franklin Roosevelt, because of his “redlining,” is probably next on the list [A ‘Forgotten History’ Of How The U.S. Government Segregated America, by Terry Gross, NPR, May 3, 2017].

The path to power is seeking out things to be offended by and using state and media power to punish foes.

Conservatives who argue that America is not racist, or has been relatively non-racist compared to other countries, miss the point. This isn’t about history, but power.

Republicans should remember that what Ronald Reagan said about economics applies equally to culture: “If you want more of something, subsidize it.” Not surprisingly, if you subsidize grievances, you’ll get more of it, until we get to the point where the system can no longer function.

Thus, we can’t have normal courtroom procedures because now we are told, by a Jewish immigrant judge, that blacks can’t get a fair trial in a courtroom that has white portraits. We can’t stick with the Constitution or even “one-man, one-vote” elections, because blacks are held back and their votes should count for more [The Votes of Black Americans Should Count Twice, by Brandon Hasbrouck, The Nation, December 17, 2020]. Even the military, the ultimate bedrock of state authority, must prioritize diversity over effectiveness. When China is pursuing greatness while post-America is pursuing “equity,” it’s easy to see how this is all going to end [China has done human testing to create biologically enhanced super soldiers, says top U.S. official, by Ken Dilanian, NBC News, December 3, 2020].

Even elite schools now teach the wealthy elites how to exploit intersectionality for power, in the same way boarding schools once taught young aristocrats etiquette, dancing, and intrigue. The goal is the same, it’s just the methods have changed. The fact that the government discriminates against whites and that whites don’t enjoy some privileged exemption from illness or death means nothing. The purpose of a ruling ideology is to provide cover for the Ruling Class, not to fit reality. Peter Brimelow once said that America may be destined to fall the same way the Soviet Union fell, and for the same reason: the political myth of the state is too far detached from reality for us to continue to operate.

President Trump is being accused of “sedition” for questioning the election results [NY Attorney General Letitia James Torches ‘Loser’ Trump Over Martial Law Meeting: ‘This is an Act of Sedition,’ by Tommy Christopher, Mediaite, December 23, 2020]. So much, needless to say, for the Russia Hoax.

But one must ask: sedition against what? Treason against what? With tens of millions of illegal immigrants occupying American soil, to even speak about the rule of law is an obscenity. America can’t simultaneously be the land of our forefathers for which we must give our all and be a racist abomination on “stolen land” that shouldn’t exist.

Even the lowest definition of national identity, having the correct paperwork that makes you a citizen, is too much for our government. We saw this most clearly with the failed effort to pass a COVID-19 stimulus bill, complete with $2,000 survival checks for struggling Americans. Of course, if President Trump and Republicans had dropped everything and campaigned purely on this issue before the election, I have no doubt they would have won. (If you are among those who think President Trump did win and was cheated, I have no doubt he would have won by enough that the Dems wouldn’t have been able to fake it.)

Yet even now, when Republican control of the Senate majority is on the line, Republicans are muttering vaguely about fiscal conservatism and refusing to deliver direct aid to Americans [GOP blocks House Democrats’ attempt to pass $2,000 stimulus checks, by Jacob Pramuk and Tucker Higgins, CNBC, December 24, 2020]. They’re doing this even after President Trump called them out [Trump calls on Congress to approve $2,000 stimulus checks, hinting he might not sign relief bill without changes, by Rachel Siegel, Josh Dawsey, and Mike DeBonis, Washington Post, December 22, 2020].

President Trump would be in a different place if he had governed as a third force between standard Republicans and Democrats and he’s disappointed many by acting the way he did.

Amazingly though, he’s still the best we have. Certainly, the Democrats are no better. They are refusing to allow a straight up-and-down vote on direct stimulus payments because they won’t give up  millions of dollars for foreign aid programs, the Refugee Resettlement racket, and “democracy programs” [How Congress Can Give Americans $2K relief checks and cut omnibus pork to pay for it, by Rebecca Mansour, John Binder, and John Carney, Breitbart, December 24, 2020].

How is this possible? More than three-quarters of American voters think the checks should be at least $1,000, yet neither party seems willing to do what is necessary to deliver it [43% of Americans Agree With Trump, Say Stimulus Checks Should Be $2,000 or More: Poll, by Matthew Impelli, Time, December 24, 2020].

Even “fiscal conservatives” should know that federal spending will increase far more dramatically under a Democratic majority in the Senate than if the GOP can save the Georgia seats. Nonetheless, Mitch McConnell apparently can’t see that taking an unpopular stand against his president and the de facto leader of his party will lead to catastrophe. (As we go to digital press, the Trump seems to have been forced by GOP treachery to sign the thing: 'GOOD NEWS Trump teases Covid stimulus deal after he refused to sign bill causing millions to lose unemployment benefits, The Sun, UK, December 27, 2020  and Trump signs coronavirus relief and government funding bill into law after lengthy delay, CNN, December 27, 2020.)

It’s difficult to avoid the conclusion that Establishment Republicans prefer defeat to a populist victory. They are so corrupt and/or cowed by the Main Stream Media that sheer political self-interest isn’t enough.

My view: what America needs is not extreme or unpopular. It involves abolishing racial distinctions in law, enforcing immigration control, establishing English as the official language, and giving ordinary Americans a stake in the social order by rebuilding the middle class with populist economic policies.

Most of all, the government would need to stop incentivizing racial grievances politics.

It doesn’t sound like much, but even as I write it, I know no Republican who would do it. Rather than trying to escape to civic nationalism, we have to figure out how to survive in a world defined by identity politics, rather than pretending it doesn’t exist [Dangerous Escapism, TheZMan, December 23, 2020].

Right now, what is keeping America going is white guilt and the shameful reluctance of conservatives to challenge institutions that are fundamentally hostile to them.

In short, we’re saving the system from itself. However, there simply aren’t enough white people to keep this system stumbling along. I don’t foresee civil war or secession, though we’ll probably get the occasional nihilistic murders from broken people spat out by a broken society. What we’ll get is the increasingly absurd “flight from white,” more cynical claims of victimization, more irrationality, more atomization, and more desperate people.

The VDARE Foundation’s choice to invest in a castle in West Virginia wasn’t just aesthetic or practical, but political. Perhaps even poetic.

Our job is to build a place of safety, physically, economically, and intellectually, for Americans who have been dispossessed from their birthright.

Our Ruling Class has a vested interest in making our country worse. In response, we have to stand up for the Historic American Nation.

After President Trump is gone, it doesn’t look like anyone else will.