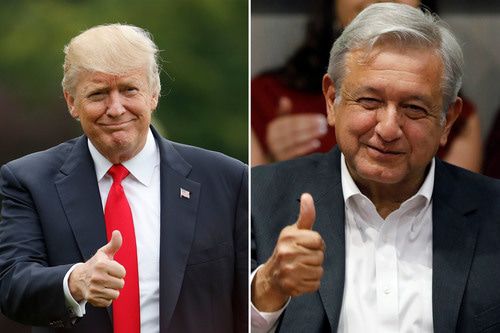 See, earlier, Trump And Mexican President AMLO Might Get Along, But Mexico Won’t Help With Immigration

“New President of Mexico has been an absolute gentleman,” tweeted President Trump.

That was August 10, and two weeks later, his relationship with Andres Manuel Lopez Obrador, also known as AMLO, seems to be going smoothly. We seem to be on the verge of a revision of NAFTA [Mexico very advanced in working through U.S. NAFTA issues: minister, by Timothy Angle, Sharay Angulo, Reuters, August 24, 2018].

Despite warnings that Trump and AMLO would be at loggerheads, they started off famously, with Trump’s warm congratulations after the election on July 1, and a pleasant, half-hour phone call. As VDARE.com Editor Peter Brimelow observed  on the August 17 Ralph Retort, Trump and AMLO are nationalists, not globalists. Thus they can understand each other and work together.

Granted, the two might clash over immigration in general, and the border and citizenship in particular. But as yet all is calm.

Take the Wall, for example. How does AMLO, who takes office on Dec. 1, deal with it? Of course he’s against it, as any Mexican president has to be. “Nobody is going to menace us,” he gravely warned, “with closing or militarizing the border or constructing a wall” [Rechazo De AMLO A Las Amenazas De Construir Un Muro (AMOL Rejects Threats To Build A Wall), by Enrique Mendez, La Jornada, Aug. 7, 2018].

“I don’t want to talk about the subject,” AMLO said recently. When reporters pushed him, he reminded them that Trump “has the freedom to express himself, but we don’t have that word in the agenda.”

So AMLO won’t discuss the wall with Trump and will concentrate on the big picture, knowing that if we want to build a wall, we can. What a contrast with other Mexican politicians, who go on and on about the wall and how Mexico won’t pay a peso for it.

More evidence that AMLO wants a friendly relationship: a letter he sent to The Donald via Secretary of State Mike Pompeo, who visited Mexico to meet AMLO in July.

Dated July 12, the letter thanks Trump for his “good disposition” and “respectful treatment,” then proposes “a new era” in U.S.-Mexican relations “based on mutual respect and the identification of areas of understanding and common interests” [Carta Completa Que AMLO Envió A Trump Con Plan Bilateral (Complete Letter That AMLO Sent To Trump With Bilateral Plan), La Jornada, July 22, 2018].

Sounds good to me, but let’s see the details.

AMLO proposes advances in “commerce, migration, development and security,” and observes that more Mexicans and Americans are in each others’ countries than in any other countries. “The understanding that I propose in this letter,” he wrote, “should lead us to a dignified and respectful treatment of these communities.”

But the important point is our National Question: immigration. Or for AMLO, migration.

[T]he most essential goal of my government will be that Mexicans don’t have to migrate due to poverty or violence. We want emigration to be optional and not a necessity. We will work for people to find work and well-being in their places of origin, where their families are, their customs and cultures. To achieve this fundamental goal, the new government will carry out the biggest effort that has ever been carried out in Mexico.

That sounds good, but many Mexican politicians have said the same thing. And they always defend Mexicans’ right to migrate to the United States. During the campaign, AMLO himself declared that everybody in the world had the right to emigrate here.

Still, he outlines an ambitious plan to improve the Mexican economy, education, tourism and health care. He wants to construct a high-speed railroad in the Yucatan, a cargo railroad in the Isthmus of Tehuantepec, and to plant a million hectares of fruit and timber trees in the southeast.

One goal: “To retain the population in their towns, expanding opportunities of work and well-being.”

Obviously, a more prosperous Mexico suits American interests. But we can’t really bring that about, and Mexican history is replete with ambitious but unaccomplished goals.

Besides, most of today’s illegal immigrants to the U.S. come not from Mexico, but from Central American countries even poorer than Mexico. Mexico is either unable or unwilling to stop them.

So even if Mexico, not that poor by world standards, improves its economy, what about Central America?

[T]he migratory problem should be dealt with in a comprehensive manner and at the root of the problem, through a development plan that includes the Central American countries, where millions of residents do not have the opportunities of work and they are obligated to leave their towns and seek a living and to mitigate their hunger and poverty.

In other words, Alliance for Progress 2.0, as he proposed during the campaign.

If the U.S. and Mexico participate in this plan, and we include the Central American countries, each country contributing in accordance with the size of its economy, we can gather a considerable quantity of resources for the development of the region, which would destine 75% to finance projects to create jobs and fight poverty, and the remaining 25% to border control and security.

Of course, with “each country contributing in accordance with the size of its economy,” American taxpayers will foot the bill.

[W]e would be dealing with the causes of the migratory phenomenon. At the same time, each government, from Panama to the Rio Bravo [Rio Grande], would work to make the migration of its citizens unnecessary and take care of its borders to avoid the illegal passage of products, weapons and drugs, which, we consider, would be the most humane and effective way to guarantee peace, tranquility and the security of our peoples and nations.

Well, again, that sounds great. But will it happen?

The letter ends with AMLO’s explaining that he, like Trump, fought the political Establishment and that the two should work together:

As far as politics go, I’m encouraged by the fact that both of us know how to accomplish what we said and we have confronted adversity with success. We were able to put our voters and citizens at the center and displace the establishment, the ruling regime. Everything is ready to begin a new era in the relationship between our societies, based on cooperation and prosperity. Let’s do it. I send you an affectionate embrace, Andres Manuel Lopez Obrador.

AMLO’s proposal sounds solid, but Trump and the American taxpayers might not want to finance it. How effective would it be and who would manage it?

And as long as our borders are open, people will emigrate because they can make more money here than in Central America. Which exposes us to funding a massive aid program that does nothing to stop the mass migration.

And will AMLO allow U.S.-bound Central Americans to continue traversing Mexico? During the second presidential debate, he said Mexico should not. 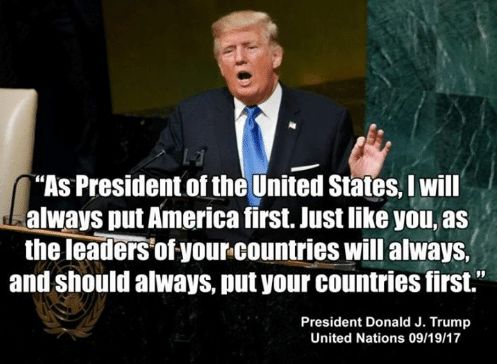 Durazo “emphasized that the new force would be part of a greater regional development effort to alleviate poverty and violence that brings so many Central Americans to cross into Mexico.” But he added, importantly, that a “considerable” and “highly-specialized” border police would patrol Mexico’s northern border. He also said the new border police would stop “undocumented immigrants and people smugglers from crossing into Mexico.”

But will AMLO really help stanch the hemorrhage of Central Americans pulsing through Mexico and splashing into our southern border?

Who knows? But whatever AMLO does, Trump must stay the course: build a wall to stop the border-jumping illegal aliens, and reduce if not stop legal immigration.

Trump must remember what he told the motley crew at Turtle Bay’s Tower of Babble: