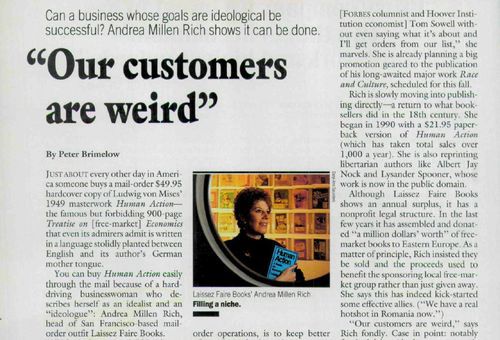 VDARE.com Editor Peter Brimelow writes: The recent sad news that Andrea Millen Rich had died at the age of 79 after an 18-year struggle with cancer brought back vivid memories of the early 1980s. Power suits with padded shoulders were in for women: my late wife, also later a cancer victim, wore them to her office at Drexel Burnham. Andrea would convene meetings of New York City’s libertarian underground in Laissez Faire Books’ crammed Greenwich Village storefront. The enormous figure of Roy Childs, Editor of the Laissez Faire Books catalog, would be seated among acolytes like a bearded Buddha.  All now irretrievably lost, borne away by Time’s ever-rolling stream.

Andrea herself, with her close-cropped blonde curls, was an example of another now-vanished phenomenon: small-town Southern Jews, once ubiquitous across the old Confederacy. She retained her Tennessee accent even after years of residence in New York. At that that point in political history, the distinction between libertarianism and conservatism was not as sharp as it was later to become, and had been earlier, during the Vietnam War—I remember being startled by Andrea’s visceral anger, which she felt obliged to express in person at a party to which she had nevertheless kindly invited us, at my debunking of A Bright Shining Lie, Neil Sheehan’s fashionable but fatuous book on American proconsul John Paul Vann. Andrea and her husband Howie Rich left New York for Philadelphia at some point after 9/11 and, thinking about it, I realize I never heard her views on the immigration wars in which I became increasingly embroiled. Perhaps as well.

Also swept away is the direct-mail technological moment which Andrea seized upon to build Laissez Faire Books. I explored the details in this FORBES piece below. Direct mail was also responsible for a great efflorescence of investment letters, about which I wrote a book that the Riches sold with their customary efficiency, and—to no small extent—for the rise of the Conservative Movement that culminated in the election of Ronald Reagan. Ironically, as Silicon Valley’s Tech Totalitarians struggle to get the internet genie back in the bottle, it’s not at all impossible that patriots will be forced to return to snail mail and tree-based journalism (Subscribe to the VDARE Quarterly!) In that case, the story of Laissez Faire Books will be even more worth studying.

Can a business whose goals are ideological be successful? Andrea Millen Rich shows it can be done.

"Our customers are weird" 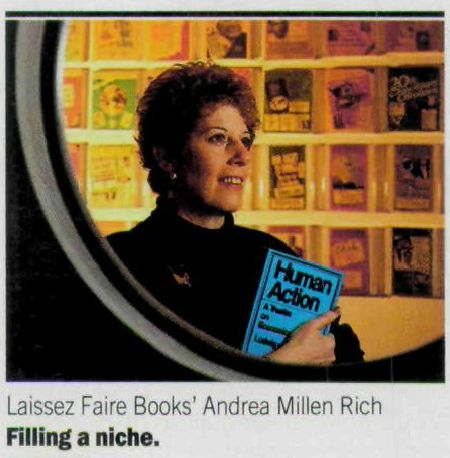 JUST ABOUT every other day in America someone buys a mail-order $49.95 hardcover copy of Ludwig von Mises' 1949 masterwork Human Action--the famous but forbidding 900-page Treatise on [free-market] Economics that even its admirers admit is written in a language stolidly planted between English and its author's German mother tongue.

You can buy Human Action easily through the mail because of a hard­-driving businesswoman who describes herself as an idealist and an "ideologue": Andrea Millen Rich, head of San Francisco-based mail-order outfit Laissez Faire Books.

Rich markets some 1,500 titles on assorted free market and libertarian themes via catalog and 24-hour tollfree phone. The recent buzz in the book business has been about superstores. But Rich is proving that newfangled technology and old-fashioned knowing your customer makes possible the profitable penetration even of small ($1.3 million annual volume) niches.

One reason Laissez Faire answers its own 800 lines, unlike many mail-order operations, is to keep better tabs on its readers' reactions.

Commercially, Laissez Faire's main weapon is its monthly catalog, mailed to a carefully combed list of over 40,000 regular book buyers. Laissez Faire buys the books it markets, unlike retail bookstores, which in effect borrow them from the publisher on a sale-or -return basis. Upside: Publishers are relieved of risk. Downside: the bone-crunching discounts Rich demands-mffiing to those publishers not yet awake to the direct mail revolution.

Critics argue that Laissez Faire drains sales, reducing a book's exposure to bookstores and thus its chances of impulse purchases that might lead to word-of-mouth lift-off. Rich naturally dismisses this. She says Laissez Faire can guarantee to authors that their personal following will be delivered. That's particularly important for certain controversial writers, because their books have a funny habit of being buried by the politically correct bookstore proletariat.

"I can announce a new book by [FORBES columnist and Hoover institution economist] Tom Sowell without even saying what it's about and I'll get orders from our list," she marvels. She is already planning a big promotion geared to the publication of his long-awaited major work Race and Culture, scheduled for this fall.

Rich is slowly moving into publishing directly--a return to what booksellers did in the 18th century. She began in 1990 with a $21.95 paperback version of Human Action (which has taken total sales over 1,000 a year). She is also reprinting libertarian authors like Albert Jay Nock and Lysander Spooner, whose work is now in the public domain.

Although Laissez-Faire Books shows an annual surplus, it has a nonprofit legal structure. In the last few years it has assembled and donated "a million dollars' worth" of free market books to Eastern Europe. As matter of principle, Rich insisted they be sold and the proceeds used to benefit the sponsoring local free market group rather than just given away.

She says this has indeed kick-started some effective allies. ("We have a real hotshot in Romania now.")

"Our customers are weird," says Rich fondly. Case in point: notably few bad debts. (And, even more curious for a group supposedly keen on modernity and change, a technophobic preference for paying by check rather than credit card.) The Clinton presidency has been good for the business—revenues rose 15 % in 1993.

Rich estimates the total U.S. community of book-buying libertarians at about 100,000. She figures her market is close to saturated. But recently Laissez Faire began advertising on the Rush Limbaugh radio show, pushing Patient Power, a pocket-size version of John Goodman and Gerald Musgrave's free-market alternative to the Clinton health plan.