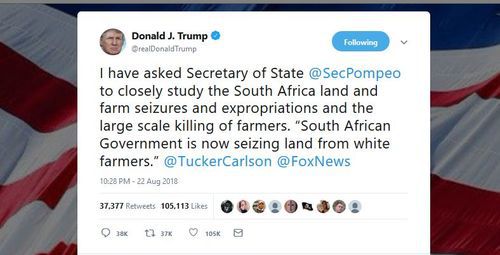 Journalists really, really hate it when something gets in the way of white people being tortured and killed.

Thanks to a segment by Tucker Carlson, President Trump broached the horrific crimes take place against white South Africans and the far-left government's plan to steal their land.

I have asked Secretary of State @SecPompeo to closely study the South Africa land and farm seizures and expropriations and the large scale killing of farmers. “South African Government is now seizing land from white farmers.” @TuckerCarlson @FoxNews

In response, journalists have exploded in outrage. Few are disagreeing with what is actually happening in South Africa. The main argument seems to be that people they don't like are concerned about the situation, therefore, no one else is allowed to be either.

The Media is so anti-white that they call you a “racist white supremacist” for speaking out against the dispossession of white South African farmers. pic.twitter.com/gdMutLMT8D

The United States currently provides South Africa with over $500 million in foreign aid, according to the State Deparment. Cutting that funding (and using it for the wall) and giving Afrikaner farmers refugee status are two things the president could do immediately to start turning around this situation.