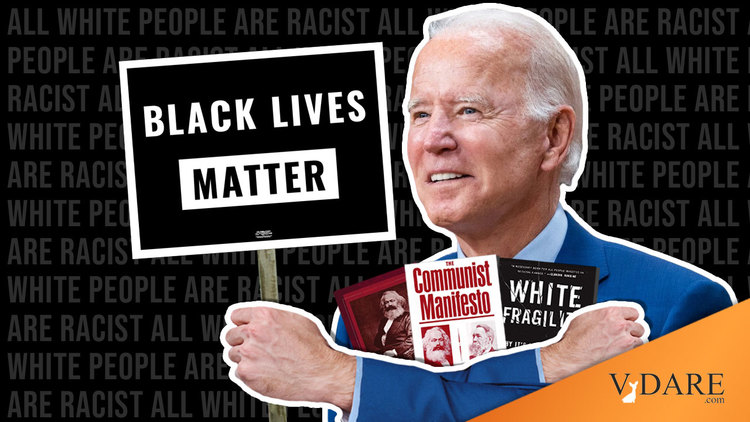 This Memorial Day, Mourn For Occupied America—And Organize To Get It Back

It’s a new post-American age, and thus a new Memorial Day. This year, the “hero” being memorialized is George Floyd, not American servicemen. The battle being remembered is the Tulsa “race massacre,” not any victory of American arms. As for the American military, it is currently waging a war against itself and those whites who are stuck defending a government that hates them. This is a war we want the Globalist American Empire to lose, because it’s simply a campaign of persecution against real Americans.

Those real Americans have been enduring a year of pure hell since the government abandoned its basic responsibility of enforcing law and order, sparking anarcho-tyranny in the cities. Violence disproportionately affected the “Black Lives” we are all supposed to be concerned about [Murders Are Rising the Most in a Few Isolated Precincts of Major Cities, by Jon Hilsenrath and Joe Barrett, Wall Street Journal, May 8, 2021]. But while some progressives worry that rising crime might jeopardize progressive goals, facts can’t get in the way of what is fundamentally a religious movement.

And this is fundamentally a religious movement [BLMania and the New Progressive Faith, by Gregory Hood, American Renaissance, July 29, 2020]. Where George Floyd died is now the semi-autonomous “George Floyd Square” complete with a Black Power fist and the Black Nationalist flag [What Is The Future Of George Floyd Square, by Reg Chapman, CBS Minnesota, May 26, 2021]. Masochistic whites on a pilgrimage are expected to obey special rules [Sign at George Floyd Square gives list of special orders for white visitors, by Elizabeth Rosner and Lee Brown, New York Post, April 22, 2021].

Again, if it were white people doing this, the military would have sent in the drones. However, since it is not, hijackings, sexual harassment, threats, and carjacks are allowed with impunity, with residents essentially abandoned by their government [Neighbors, feeling bullied, want activists to leave George Floyd Square, by Deena Winter, Minnesota Reformer, May 26, 2021]. The gunfire during the anniversary ceremony’s nine minutes of silence in St. George’s Square will probably become something of a yearly tradition.

While whites grovel before George Floyd’s body a-mold’ring in its golden coffin, the next Humiliation Ritual is underway. The ground dutifully paved by HBO’s newly woke Watchmen series, the spectacularly dubbed “Tulsa Race Massacre,” will now be added to the litany of feast days in post-white America [The devastation of the Tulsa Race Massacre, by DeNeen Brown, Washington Post, May 28, 2021]. This event occurred when armed blacks, fearful that a black suspect might be lynched, went to the courthouse, where they were met by whites. (Whites fought back in those days). The day after Memorial Day, President Joe Biden will go to Tulsa to rub America’s nose in the event [Biden to visit Tulsa for Black Wall Street massacre centennial, by Brittany Shepard, Washington Post, May 26, 2021].

Yet there’s little consensus that this was a “massacre,” and we can’t say with certainty that “hundreds” died. A “mass grave” supposedly unearthed isn’t even definitively linked to the event [Coffins unearthed as the search for victims of the Tulsa Race Massacre continues, by Deneen Brown, National Geographic, October 26, 2020]. This “mass grave” had some 11 bodies [Scientists find a mass grave in Tulsa that might be from 1921 race massacre, by DeNeen Brown, Washington Post, October 21, 2021]. A congressionally mandated report in 2001 repeatedly stated that the true number of victims could never be known, eventually stating “considerable evidence exists to suggest that at least seventy-five to one-hundred people, both black and white, were killed during the riot,” though the figure could be higher [Tulsa Race Riot: A Report by the Oklahoma Commission to Study the Tulsa Race Riot of 1921, February 21, 1921, p. 23. Emphasis added]. Nonetheless, the Powers That Be are headlining their stories with “as many as 300 people were killed” [What to Know About the Tulsa Greenwood Massacre, by Maggie Astor, The New York Times, June 20, 2020 (updated May 28, 2021)].

One might say that throwing around guilt about “massacres” is probably not the best idea when you are trying to unite the country.

But who seriously believes unity is the objective? Armed men and women wearing New Black Panther Party shirts marched through Tulsa’s streets on Saturday, vowing “justice… by any means necessary.” The Washington Post delicately called it “a Second Amendment demonstration” in an article about how “tensions erupt[ed] [Tensions erupt in Tulsa as city commemorates 1921 race massacre, by DeNeen Brown, May 29, 2021]. Yet these tensions are not mysteriously “erupting.” They are carefully cultivated by our rulers.

The one comic touch is that one of the main events in Tulsa, which was to feature Georgia race hustler Stacey Abrams among others, was cancelled because lawyers for “survivors and their descendants” reportedly wanted more money [Tulsa ‘Remember and Rise’ event canceled days before centennial of race massacre after dispute over payment to survivors, by Deon Hampton, NBC News, May 28, 2021]. Still, there are more grifts to go around.

Terrible events that many Americans don’t know about include long-ago history, such as the Snake River attack in Oregon in 1887, where as many as 34 Chinese gold miners were killed, and the 1864 Sand Creek massacre of around 230 Cheyenne and Arapaho people by U.S. soldiers in Colorado. Others are within the lifetimes of many Americans living today, like the 1985 bombing by Philadelphia police of the house that headquartered the Black organization MOVE, killing 11 people.

[At 100th anniversary, Tulsa Race Massacre still an unfamiliar history to many, OregonLive, May 29, 2021].

Such stories not only pave the way for reparations, they further the project of imposing guilt and self-hatred on European Americans.

Such intensive coverage about these long-ago events is in marked contrast to the devastation being inflicted on American downtowns right now as a direct result of the war against police. Needless to say, the Regime Media still pretends it’s an incredible mystery [Violent Crime Has Stayed High–Whether Police Are The Answer Is Up For Debate, by Martin Kaste, NPR, May 27, 2021]. Americans are being forced to turn to private security [Fed up with crime, Federal Hill residents hire private security company to patrol the neighborhood, by Ray Strickland, WMAR Baltimore, May 27, 2021]. Of course, gun sales are also up [An Arms Race in America: Gun Buying Spiked During the Pandemic. It’s Still Up., by Sabrina Tavernise, The New York Times, May 29, 2021]. I expect the federal government will crack down on both private security and guns soon.

Meanwhile, what is the United States military doing? According to recently dismissed Space Force commander Lt. Col. Matthew Lohmeier, the military is promoting material that teaches white people are “evil.” Bishop Garrison, Senior Advisor to the Secretary of Defense for Diversity and Inclusion, is on the record as saying support for Donald Trump means you are a racist [Meet Bishop Garrison: The Pentagon’s Hatchet Man in Charge of Purging MAGA Patriots and Installing Race Theory in The Military, Revolver, May 5, 2021].

This is the man reportedly in charge of purging the military of deplorables.

Of course, this entire effort is a reaction to a delusional Ruling Class campaign warning that “white nationalists” are in the military and the police [Biden Must Purge Military and Law Enforcement of White Nationalists, by Puneet Cheema, Slate, January 19, 2021]. The brass has been mostly silent about this purge of the armed forces, except when they obediently spoke up to condemn Tucker Carlson for denouncing it.

It’s hard to avoid the conclusion that we have undergone State Conquest, where a ruling class builds its legitimacy on the repudiation of what existed before [‘State Conquest’ in South Africa Today; America Tomorrow, by Gregory Hood, American Renaissance, April 5, 2019].

Rather than honoring George Washington, “we” honor George Floyd. Rather than working to build a triumphant national story, our elite is trained to look for grievances and extract financial settlements—an aspect of Racial Socialism. Rather than winning wars against foreign enemies, America’s military seems to be gearing up for a war against its own population.

On this Memorial Day, we shouldn’t just mourn our honored dead. We should mourn the country they served, which is currently under an occupation more terrible than any we’ve faced in our history.

This Memorial Day, don’t just mourn for our Occupied America—organize to get it back.