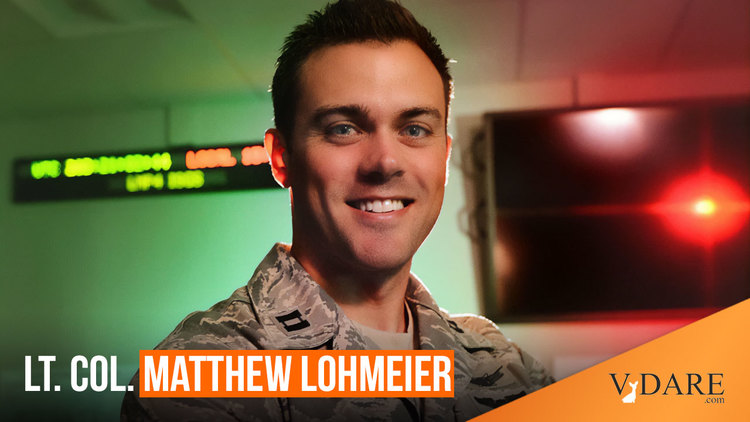 We all know it’s coming.

It will happen in our lifetime.

But what will it take?

There is no such thing as white privilege in America, save an elite promoted to their position in life based solely on a devotion to advocating for advancing all things non-white.

All at the expense of the standards set and maintained by the white people who once were responsible with maintaining America.

With one person standing up while so many others kneel, we move inexorably to the moment I long ago dubbed “The Happening.”

Simply put, it’s admitting anti-white discrimination exists—outright bigotry toward those with white skin—and calling it out.

A recently relieved Space Force commander claimed Monday night that the Pentagon sent servicemembers a video that claimed that America and white people were “evil.”

Lt. Col. Matthew Lohmeier told Fox News’ “Hannity” that the videos “were sent out to every base [and] servicemember” and “we were asked to watch [them] in preparation for our extremism down days and discussions on race.”

Those videos, Lohmeier added, “taught that the country was evil, that it was founded in 1619 and not 1776, and that whites are inherently evil.”

Lohmeier did not specify when the videos were sent out beyond saying it had happened “in the past ten months, when I was in command of a unit.”

However, in early February, Defense Secretary Lloyd Austin ordered a military-wide stand down in an effort to tackle domestic extremism in the ranks following the Jan. 6 riot at the U.S. Capitol.

Lohmeier, a former commander of the 11th Space Warning Squadron at Buckley Air Force Base in Colorado, was temporarily reassigned last week due to comments he made on a podcast criticizing the military’s approach to diversity training.

A Space Force spokesman told Military.com an investigation is underway to determine whether the comments constituted “prohibited partisan political activity.”

“The diversity, inclusion and equity industry and the trainings we are receiving in the military … is rooted in critical race theory, which is rooted in Marxism,” Lohmeier told L. Todd Wood of the “Information Operation” podcast.

Lohmeier appeared on the podcast to promote his new book, “Irresistible Revolution: Marxism’s Goal of Conquest & the Unmaking of the American Military.”

In the book, Lohmeier claimed a “neo-Marxist agenda” had infiltrated the Pentagon and warned on the podcast in a comment directed at Austin that “this agenda, it will divide us, it will not unify us.”

However, he added that “my intent never has been to engage in partisan politics … I have written a book about a particular political ideology in the hope that our Defense Department might return to being politically non-partisan in the future as it has honorably throughout history.”

Call Critical Race Theory what it is… an anti-white concept, designed to create hostility toward all white people in non-whites.