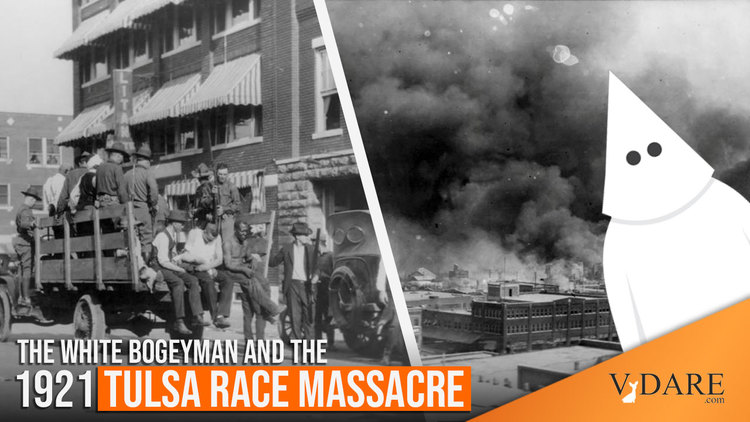 If you keep making predictions and all the ones you get wrong are memory-holed by CNN, eventually one of them will turn out to be right. It’s like how the media predicted public disorder from the right for years but in 2020, had 500+ riots from the left and basically none from the right. Finally, on January 6, 2021 they get their riot from the right and will never ever let anyone forget it.

In Tulsa 100 years ago, a black mob started a race riot and a white mob ended it.

There hasn’t been one of those in the U.S. since Detroit in 1943. Since then, “race riot” has meant blacks looting and/or burning.

Of course, as we will be told over and over for the rest of the month, the black part of Tulsa in 1921 was practically Wakanda. The black owned part of Tulsa would be worth a zillion dollars today if not for the “Tulsa Race Massacre” of 1921 (even though the white owned part of Tulsa isn’t exactly Palo Alto today, but who’s counting?). If it weren’t for white people, black people would all be rich from inheriting valuable property, due to the famous black ability to resist spending money.

Opinion: The horror of Tulsa still reverberates. It shows why America needs to take reparations seriously.

After all, the Attiah family has clearly been in America since 1619, so the Attiahs should be compensated for all the horrors they’ve involuntarily been subjected to in America over the last 402 years, such as hair-touching and professors asking them for the black opinion on this subject. No ancestor of Karen Attiah has ever sold a fellow black into slavery, so whites must pay.

Wikipedia recounts all the horrors the Attiahs have experienced in the US since 1619:

Attiah was born in Northeastern Texas in 1986 to a Nigerian-Ghanaian mother and Ghanaian father. Her father was a pulmonologist. After a bachelor’s degree at Northwestern University, Attiah won a Fulbright Scholarship to study in Accra, Ghana, and obtained an MA in International Affairs from Columbia University’s School of International and Public Affairs in 2012.

For Black people in America, the fight for justice and safety can feel like a cruel game of musical chairs.

The dull beat of anti-Blackness is always humming in the background, commanding us round and round in familiar cycles of protest, resistance, organizing and documenting our trauma. Sometimes the odious beat seems to stop, offering what feels like a respite — for those lucky enough to survive the last cycle.

This week marked the one-year anniversary of George Floyd’s murder by White police officer Derek Chauvin in Minneapolis. Next week marks the 100-year anniversary of the Tulsa Race Massacre. And in between these two grim milestones, we have the three-day Memorial Day weekend to remember and reflect on those lost in past cycles of violence.

We need to throw something powerful into these spinning gears — and, in fact, there is an option standing before us that might be big enough. As the pressure and visibility of reparations efforts ramp up across the United States, this country has a historic opportunity to free itself from the vortex of racism and white supremacy.

In his groundbreaking 2014 Atlantic essay “The Case for Reparations,” Ta-Nehisi Coates wrote that the payment of reparations would “represent America’s maturation out of the childhood myth of its innocence into a wisdom worthy of its founders.” It seems to me that more than nine minutes of video of a Black man’s murder has now cracked that myth of White innocence.

In truth, lots of American cities had a vibrant black business center before the Affirmative Action Age. But when big companies in the 1960s started wanting to hire blacks for virtue-signaling reasons, bustling black business districts quickly vanished as the indigenous talent got snatched up by higher-paying white corporations.

Also, it didn’t help that blacks started rioting and looting and burning down their own business districts in the 1960s.