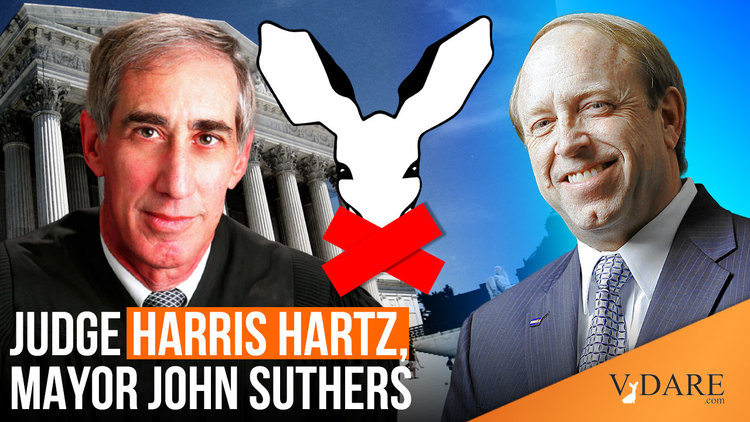 “THE LEGAL FOUNDATIONS OF THE AMERICAN GULAG ARE BEING LAID”—We Appeal VDARE vs. COLORADO SPRINGS To U.S. Supreme Court

Of all the litigation that VDARE.com has embarked on since we realized that spending money on lawyers was our only alternative to being forced out of the public square (vs. PayPal, New York Times, Facebook, and others I’ve not written about yet), the case I was most confident about was VDARE FOUNDATION vs. City of Colorado Springs. It stemmed from RINO Mayor John Suthers’ reckless 2017 proclamation that he would not extend city services, aka police protection, to VDARE.com’s proposed conference at the Cheyenne Mountain Lodge, which not surprisingly cancelled shortly afterwards. But there is overwhelming federal case law establishing the principle that local governments must defend the First Amendment rights of even unpopular groups. (Jared Taylor’s American Renaissance had already prevailed in court against the State of Tennessee’s parallel attempt to suppress its annual conference by charging it for police protection). Our first lawyer even exuberantly undertook to take our case on contingency—i.e., he expected to be paid out the extensive damages for which federal law provides in such civil rights cases. So I was surprised that Mayor Suthers did not immediately settle, thus arrogantly inflicting significant costs on his taxpayers (and of course us); and later that Magistrate Judge Kathleen M. Tafoya and District Judge Christine M. Arguello concurred in dismissing the case. However, I was absolutely thunderstruck when the U.S. Tenth Circuit Court of Appeals upheld this dismissal 2–1 on August 23, 2021  and also quickly refused our petition for an en banc hearing. (Our appellate brief is here.)

This forces us to apply for certiorari to the U.S. Supreme Court. It will be immensely expensive and logistically demanding for VDARE.com’s very small, and very poor, operation. Fortunately, we will be aided by a powerful and eloquent dissent from the Tenth Circuit’s heroic Judge Harris L. Hartz.

It’s impossible to overstate the importance of the issue at stake here—and not just for VDARE.com. As a noted First Amendment lawyer wrote me privately after the Tenth Circuit decision:

Essentially, the majority opinion stands for the proposition that the city is free to threaten private entities in order to suppress speech.

Simply put, the majority opinion lays out the legal foundations of the American Gulag being constructed by the communists who apparently control the Biden Regime. It would mean that local governments can refuse to defend American patriots against attack from communist mobs. And, as we now know, if patriots defend themselves, they will be indicted by Soros prosecutors (see here, here, here, here, etc.). This is what the late Sam Francis called “anarcho-tyranny.”

This is completely new. No local government in the American South was allowed to refuse to defend Civil Rights anti-segregation demonstrations in the 1960s.My particular fear, for this and other reasons: that FBI Director Chris Wray’s crazy assertion, after an entire summer of unchecked Black Lives Matter /Antifa riots, that “white supremacists” are the real source of “domestic terrorism,” which is already being used to suppress grassroots political dissent against anti-white Critical Race Theory in public schools, has also been propagated throughout the entire legal nomenklatura under the guise of their role as “officers of the court.”

If that’s so, any patriot who can be portrayed as pro-white aka pro-American will automatically be denied justice, regardless of the technical merits of the case.

In effect, we would be looking at a slow-motion institutional Communist coup.

None of that, however, appears to have inhibited Judge Hartz’s magisterial dissent. (For the record, he’s a George W. Bush appointee. His two colleagues who authored the majority opinion, Chief Judge Timothy Tymkovitch and Judge Gregory A. Phillips were, appointed, respectively, by George W. Bush and Barack Obama.)

My difference with the majority centers on the import of the third sentence of Mayor Suthers’s announcement: “The City of Colorado Springs will not provide any support or resources to this event, and does not condone hate speech in any fashion” [Emphasis added by Judge Hartz throughout.]

…The most reasonable, perhaps the only reasonable, construction is that the sentence conveyed, and was intended to convey, that no police or fire protection would be provided for the VDARE conference at the Resort. What other “support or resources” would the City ordinarily provide? As counsel for VDARE stated at oral argument. “What else could the Mayor be conveying?” And, according to specific allegations in the Complaint, that is how the public interpreted the Mayor’s statement. One television station allegedly reported, “Colorado Springs Mayor won’t commit city assistance to upcoming white nationalist conference,” and said that the local sheriff’s office announced that its “deputies would not be participating either unless their presence is requested by the Colorado Springs Police Department for some reason.” Certainly, at this stage of the proceedings we should adopt that interpretation in determining whether the Complaint states a cause of action. This interpretation is not merely “consistent with” the Mayor’s language; I question whether any other interpretation would be plausible…. [VDARE Found. v. City of Colorado Springs, 20-1162, (10th Cir. Aug. 23, 2021)]

Judge Hartz goes on to crush the defendant’s curious argument that Mayor Suthers’ outburst was itself protected by the First Amendment. He writes:

Judge Hartz then proceeds to the key issue:

A government effort to punish or deter disfavored speech is what VDARE adequately alleges. And the City accomplished its purpose. The complaint plausibly alleges that the Mayor’s statement caused the Resort to cancel the VDARE conference. The majority opinion opines that the statement was not “significantly encouraging or coercive.” I must respectfully disagree. I would think that most businesses would be strongly inclined to forgo a customer if they were told that they would lose police and fire protection if they did business with the customer.

And the Mayor’s announcement did much more. It implicitly invited violence…It is one thing to refuse to provide police protection. It is quite another to announce far in advance that police protection will not be provided… [A]n announcement that there would be no law-enforcement presence is an open invitation to those inclined to violence, as protesters, counter-protesters, or whatever.

As we pointed out in our original complaint, going further to Mayor Suthers’ conscious and explicit use of the city’s police power to suppress our First Amendment rights:

He also repeated his disparagement of VDARE by stating he was “fairly confident” the resort “didn’t know the nature of VDARE” when it accepted the booking and added that businesses should not permit controversial speech because it would be bad for business:

“I would appreciate if  organizations in Colorado Springs do a little bit of due diligence before they contract with groups, if it’s the type of folks that could generate controversy and be bad for their business and the community’s business.”

Of course, it was completely untrue that that the Cheyenne Mountain Lodge did not know “the nature of VDARE”—i.e. that it supported President Trump’s immigration policy in a county that voted 56%-34% for Trump in 2016—when it accepted our booking. That it is why, without complaint, the Cheyenne Mountain Lodge paid us the liquidated damages that it was contractually obliged to do for cancelling the conference.

VDARE.com’s numerous lawyer friends urge me to continue with this case. They believe it is very strong. They express surprise that we were not granted an en banc hearing, given Judge Hartz’s dissent. They are struck by the fact that the majority did not to deal in any way with Judge Hartz’s arguments.

Needless to say, we have no choice but to expend our money and resources in this attempt. For us, and for American patriots who want to protest their country’s destruction through post-1965 immigration policy, this is what the Chinese strategist Sun Tzu called “Death Ground”—we must fight, or we will be totally driven out of the public square.

I’m not going to deny that this is a dark moment—for us and, frankly, for the U.S. Constitution. We will fight—but we need your help. Please give generously—now. 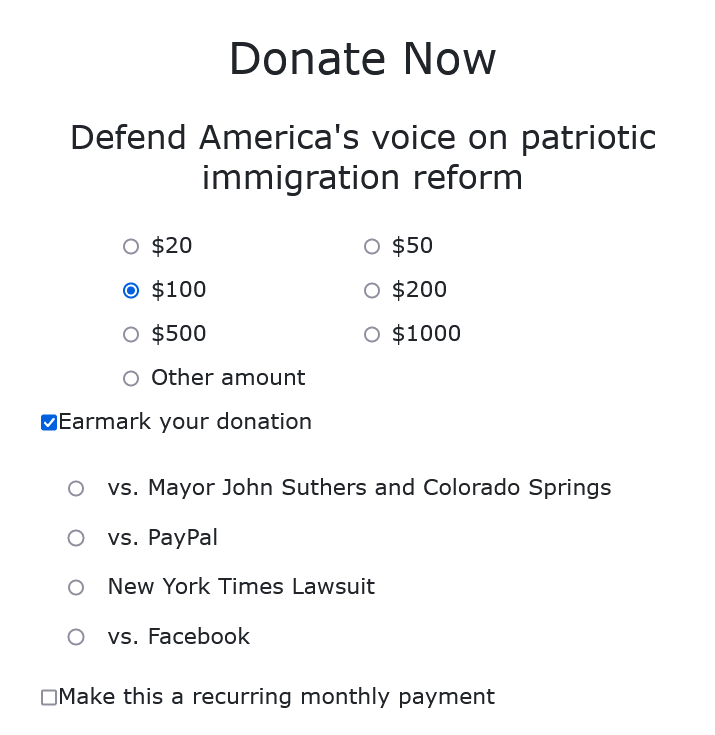