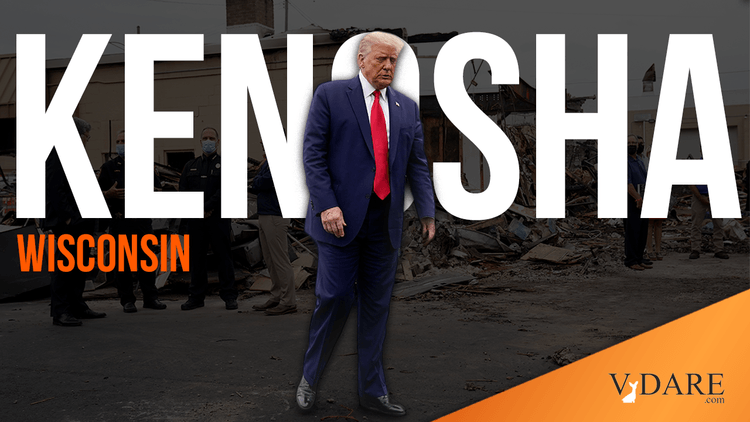 From Kyle Rittenhouse To Michael Flynn, We’re In Third World Post-America. And There’s No Rule Of Law

Earlier, by John Derbyshire: From Wisconsin To Washington D.C.—"Our Culture And Way Of Life" Under Attack

As President Trump tours riot damage in Wisconsin [Amid tensions in Kenosha, Trump tours damaged businesses, meets with law enforcement, by Jordyn Phelps, ABC News, September 1, 2020], patriots are coming to a grim realization: In the U.S. today, there is no Rule Of Law, justice is arbitrary, and even if the truth is caught on video, the Main Stream Media can still shout it down.

Even the most cynical can only gasp in astonishment as the MSM, Leftist politicians and the Biden campaign (all essentially one entity) have gone from pretending Black Lives matter riots didn’t exist to blaming Trump for them. The MSM is now shocked! SHOCKED! that Trump suggested Kyle Rittenhouse may have acted in self-defense. The massive black riots, shakedowns, and various killings and attacks on whites simply don’t register.

Trump is also being forced into a box over General Michael Flynn, who was selectively prosecuted and is still being persecuted by a black federal judge. And former Rep. Steve Stockman, also rotting in prison in extremely dangerous conditions, was another selective prosecution for unknown ends.

Meanwhile, Antifa rioters, like clockwork, riot day after day in cities around the country without any consequence at all.

“The Rule Of Law” is gone in the United States–perhaps the inevitable consequence of tolerating lawlessness in the form of mass illegal immigration.

Of course, despite the Ruling Class’s ongoing attempt to replace the American people through mass immigration, white voters will still remain the critical voting bloc in the 2020 election, especially in the Midwest. The presidential race has tightened significantly in the Midwest, including in Minnesota [An unlikely state tightens up, by David Siders, Politico, September 1, 2020]. Obviously, Wisconsin is now the battleground (figuratively and, alas, literally), and there support for Black Lives Matter has collapsed [Support for Black Lives Matter Dropped 13 Points in Wisconsin in One Poll–Before Shooting of Jacob Blake and Riots, by Rudy Takala, Mediaite, August 27, 2020]. For what it’s worth, there’s also some evidence Trump is gaining with black voters nationwide [Poll: Trump approval rises among black, Hispanic voters amid convention, The Hill, August 28, 2020]. If President Trump can win over white swing voters in the Midwest and make even a small gain in black and Hispanic support, Joe Biden’s chances suddenly evaporate (unless he can take Florida).

In response to falling poll numbers, the Biden campaign is responding with thinly veiled threats. Biden suggested Trump himself is fomenting violence and is “part of the problem,” even having the gall to cite the rising murder rates [Biden tries to blame Trump for Democrat-run cities’ unrest, by Michael Goodwin, New York Post, August 31, 2020].

This is simply a threat: Vote Biden, or the riots will continue until you reverse your decision. It’s a Color Revolution, American-style, with some of the funding likely coming from the same sources.

This is particularly brazen because Democratic governors and mayors have rebuffed offers of federal law enforcement assistance. And we’ve also seen Baghdad Bob-type television segments about “mostly peaceful protests” as flames soar in the background. Until Monday, most reporters didn’t even want to admit the riots existed.

Nonetheless, Portland Mayor Ted Wheeler claims that somehow Trump has created the problem [Portland mayor excoriates Trump: ‘It’s you who have created the hate,’ by Paul LeBlanc, CNN, August 30, 2020]. Blaming a reaction that the Dark Lord Trump has mysteriously evoked allows Mayor Wheeler to avoid doing something about the actual people trashing his own building and city.

Still, there is a Narrative emerging.

Joe Biden condemned President Trump’s supposed call for his supporters to be an “armed militia” [Biden Calls Trump ‘Weak’ For Refusing To Condemn Armed Militia At Protests, by Jack Brewster, Forbes, August 31, 2020]. But of course, the reason people with guns are popping up to defend their property is because the police won’t.

Nonetheless, this isn’t what Biden is interested in. He said Trump was too “weak” and “scared” to “repudiate one of his supporters who is charged with murder” [Statement By Vice President Joe Biden On President Trump’s Press Conference, JoeBiden.com, August 31, 2020]. He meant Kyle Rittenhouse.

But unless there is new evidence none of us has seen, Kyle Rittenhouse appears to have acted purely in self-defense. President Trump clearly has seen the videos. Even The New York Times painstakingly broke down the videos. The evidence right now seems to support Rittenhouse’s claim of self-defense [Tracking the Suspect in the Fatal Kenosha Shootings, by Haley Willis et al., August 27, 2020].

The MSM is in hysterics [The Horror of Trump’s Support for Kyle Rittenhouse, by Dahlia Lithwick, Slate, September 1, 2020]. But, much to the frustration of prosecutors, Rittenhouse is not backing down. And he has effective legal representation

On August 29, Trump supporter and Patriot Prayer affiliate Aaron Danielson AKA Jay Bishop was killed, possibly in retaliation for Rittenhouse’s actions. Michael Forest Reinoehl, a white man with a “black power” tattoo on his neck, who claimed to be “100% antifa,” is being investigated.

But note that, incredibly, The Guardian was still outraged by President Trump’s mild condolences for the targeted murder of one of his own supporters, calling it a way of “inflaming hatreds and fears” [‘Rest in peace Jay’: sympathy for the far right foretells Trump’s election strategy, by Tom McCarthy, August 31, 2020].

I hope everyone has it straight–if you defend yourself, you’re the bad guy. If you are murdered, you are still the bad guy.

But if you are Antifa, journos defend you like Spartans at the Hot Gates.

President Trump’s own inner circle has also been targeted by selective prosecution and crazed media coverage. The most spectacular case: General Michael Flynn. A Department of Justice investigation revealed federal law enforcement used phony accusations to force Flynn into a guilty plea. Once this became clear, the DOJ attempted to dismiss all charges. But, unprecedentedly, the D.C. Circuit Court of Appeals refused, instead kicking the case back to the hostile judge who has accused Flynn of “treason” from the bench [Greg Jarrett: In Flynn case, DC circuit court plays a silly game of legal dodgeball, Fox News, September 1, 2020].

Additionally, of course, are also countless defendants on the American Right who have been railroaded by the justice system: the Rise Above Movement; the Proud Boys; some of those caught up in the riot unleashed by Charlottesville authorities in 2017; and even former Congressman Steve Stockman.

Tellingly, while Trump’s turncoat lawyer Michael Cohen was set free because of alleged concerns over coronavirus to sell his book, Steve Stockman, who is even more at risk for COVID-19 because of pre-existing conditions, rots in prison in Beaumont, Texas on questionable charges. Conservative Movement veteran Richard Viguerie reports that there are orders “straight from the top” that he won’t be released [Op-Ed: Ex-Congressman, 63, Who Exposed Obama, Clintons ‘Sentenced to Death’ in COVID-Infested Prison, The Western Journal, July 21, 2020].

From whom at “the top”? Does President Trump know? Does the Attorney General?

Arguably, the arbitrary and random nature of the American legal system has been presaged by decades of non-enforcement of immigration laws. President Barack Obama’s Deferred Action for Childhood Arrivals (DACA) took this to the next level, essentially declaring an entire class of people legally untouchable for favored crimes. And according to the “conservative” Supreme Court’s ruling on DACA, a president can’t simply undo the Executive Order of a prior president.

Thus, presidents, governors, and bureaucrats at all levels have ample rationale to simply declare blanket Amnesties for groups they like and selectively prosecute those they don’t. It’s Anarcho-Tyranny. And it’s incompatible with a free society.

We aren’t in a free society. We’re in Third World Post-America. President Trump, timid as he is, still is too independent for those who decide what laws do and do not apply. These unelected rulers include judges, bureaucrats—and, perhaps most important, the media.

It’s hard to disagree with President Trump on the riots:

The press is actually, the media, is what’s fueling this, more so than even Biden, because Biden doesn’t know he’s alive

And the media knows exactly what it is doing.