Recently, I wrote on what John Derbyshire has termed “Narrative Collapse”—the bursting of a bubble, inflated by Main Stream Media opinion managers, by inconvenient facts. Derbyshire summarized the phenomenon:

This resolute suppression of the race of criminals by the MSM gives rise to another kind of “Narrative Collapse”—the realization that what looks like an American problem is actually a minority problem.

For example, headlines that say Wealthy New Yorker jailed for keeping slaves, Sydney Morning Herald, June 27, 2008 , or Woman gets 11 years in US jail for enslaving Indonesian maids, (AFP)June 28, 2008 would make you think that Americans have resumed the un-American custom of slavery. They haven’t: the slaveholders were Mahender and Varsha Sabhnani who are what the Indian press calls Non-Resident Indians. Slavery is still more or less the custom in India, and Indians who move to the US bring their customs with them.

In the same way, many stories that are supposed to be about guns are actually about black crime.

Peter Brimelow IMed me this story, based on something that former conservative economist Bruce Bartlett had put up on Facebook

An iPhone screenshot of that: 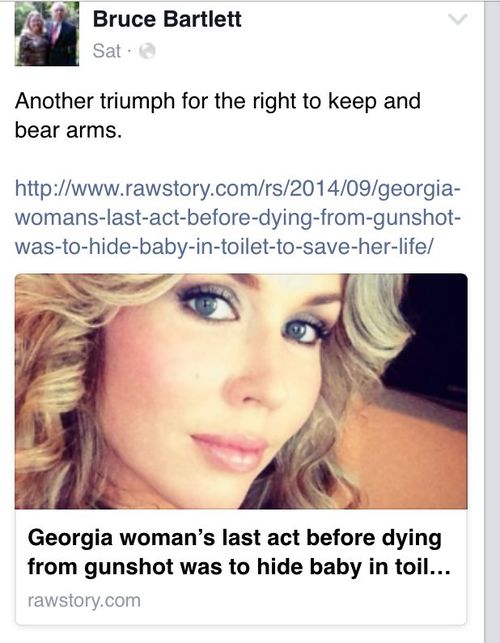 Brimelow’s question: since the story pictured the victim but not the killer, were they the same race, or was it a black killer?

Well, RawStory didn't say.[Georgia woman’s last act before dying from gunshot was to hide baby in toilet to save her life,by David Ferguson, RawStory, 20 Sep 2014]

RawStory (sic) thought this was gun story, and had it tagged with their "GUNS" tag. I thought it might be a "Not Reporting Race" story—here's our tag for that: not reporting race.

However, the misnamed Rawstory did give the guy's name: Antoine Davis.

Searching Google News for that—and remember, this is all typing on my phone with my thumb—I was able to come up with the answer, from the Daily Mail (God bless the Daily Mail) 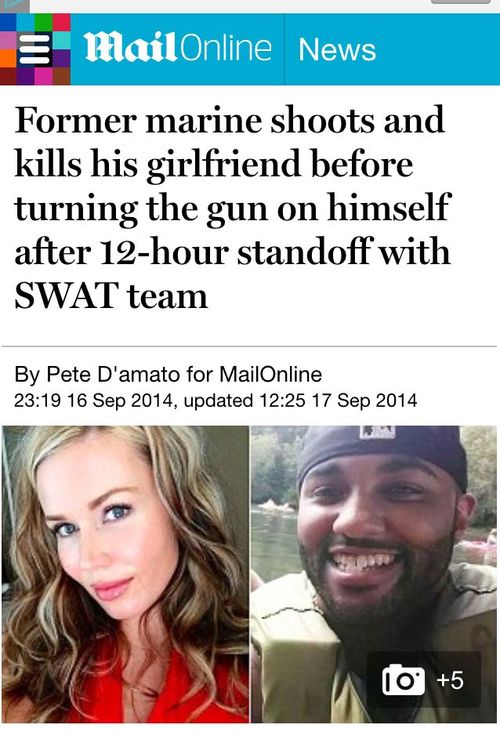 Even the Daily Mail has nothing to say about the interracial aspect of this crime. They are OK with mentioning that the killer was a Marine.

However, my basic point is that these question can frequently be solved from your iPhone.

It makes you wonder why the legacy MSM even bothers.

By the way, to answer Mr. Bartlett's implicit criticism of the right to keep and bear arms, I should point out that Antoine Davis was quite capable of killing Ms. Arrendale with his bare hands

In fact, he started out by beating her half to death with a baseball bat, with which she was trying to defend herself, only finishing her off with his gun.

In a no-gun-rights zone, there's nothing a woman like Arrendale can do to defend herself against a man Davis's size—it was her lack of a gun that cost her life.

Ms. Arrendale was Davis’s ex-girlfriend, a tragically bad choice on her part. In a blog post about the “Not All Men!” meme I noted that members of non-Asian minority groups are much more likely to commit domestic violence. Nicole Brown Simpson (Mrs. O. J. Simpson) could explain that to you–if she were alive.

Perhaps Derbyshire rules apply to dating and marriage, too.

But even women who don’t make that kind of mistake can be killed by complete strangers:

Nicholas Stix has reported on this repeatedly: for two pertinent examples see Doomed by Diversity: The Murder of Eve Carson andAnn Coulter Fans Didn't Murder Anne Pressly—It Was The “Usual Suspect”. But No One's Apologizing.

In an article about the Pearcy Massacre (five forgotten victims) Stix included a list of 21 cases of random killings of whites by blacks since the 1960s. Many of them could have been prevented by the right to keep and bear arms—in the words of handgun expert Lt. Col Jeff Cooper, USMC, author of Principles of Personal Defense: "if Nicole Simpson had studied at [Cooper's pistol training school]  Gunsite she would now be a wealthy widow."

I’ve remarked that the only thing that could have saved Nicole Simpson that day was a gun—and that the people who try to control guns have just decided that it's worth sacrificing a few female murder victims, and a lot of rape and robbery victims, to prevent “handgun violence.”

But “handgun violence” isn't the problem here, is it?