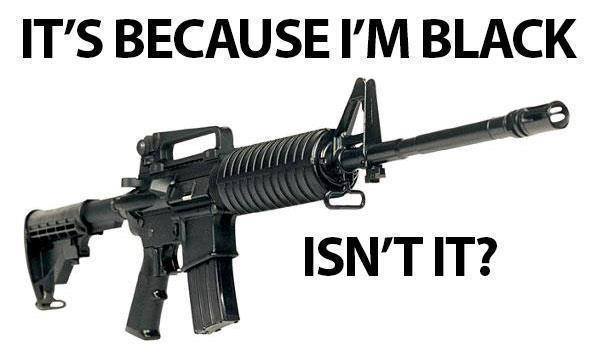 Now that America is getting so diverse, why suddenly the push for gun control?

Is the new "diverse America" not to be trusted?

What about the tens of millions of "Latinos" who abandoned their home countries and property and families and literally "voted with their feet" for gun freedom?

What about ElPaso/Las Cruces & Juarez, 1 city in 3 states with a gun control line dividing the population in half. Juarez averages 10,950 murders per year, Las Cruces & El Paso combined average 25. [VDARE.com note: And the Mexican government, in its interfering way, has asked the American government to control guns in California, Arizona, New Mexico, and Texas.]

The cost of gun control for the people of Juarez is 10,925 more murders per year plus lots more crime, they also have corrupt goon government run by cartels.

Are self defense rights only for "white" Americans?

James Fulford writes: Gun control does have a"racist" dimension; post-Civil War Southern governments imposed gun controls on freedmen, New York’s infamous Sullivan Act was at least partly aimed at immigrants from Southern Italy, Chinese in California were disarmed, and both modern liberals and what Patrick Cleburne has termed the “Minority Occupation Government” seem to be very concerned with guns in the hands of whites.[See Whites and Guns, by Gregory Hood at Amren.com]

In Paved With Good Intentions

Stephen Jackson of the San Antonio Spurs NBA team is black, and he was born in Port Arthur, Texas, a majority black city he describes as a “hellhole.” He was quoted on the street crime situation there:

“"How easy is it to buy a gun in Port Arthur?" Jackson repeated the question. “As easy as it is buying candy.” [The Devil and Stephen Jackson, June 5, 2012]

In a blog item on this, I wrote

“Here what you need to know is that that the ease of buying a gun in Port Arthur, Texas, is not due to "Texas gun culture." (John Wayne,Bill Jordan, Frank Hamer, men in big hats, et cetera.) If you are a white person in Port Arthur, with no criminal record, and want to buy a gun from a store, Texas state laws and the Federal waiting period apply.

In order for you to buy a pistol like buying candy, you have to be a black street criminal…”

If you’re a white American, you need to have a driver’s license and car insurance, you need to pay taxes, you need to fill out forms—but not if you’re an illegal alien, or a black street criminal, or part of the Chinatown underworld.

Gun control is now one of the many laws that only apply to white people.