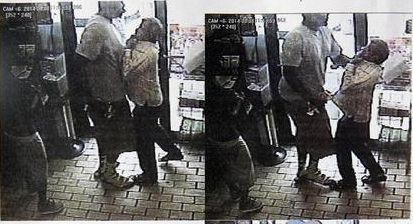 The Fulford File | Narrative Collapse, Fighting For Injustice, And The Importance Of VDARE.com

John Derbyshire recently blogged on a case of what he called “Narrative Collapse”—Django Unchained actress Danielle Watts, who is black, reported that she was handcuffed by racist police who suspected her of being a prostitute because she was kissing her husband in a car. She refused to cooperate with police and identify herself because Racism! [Django Unchained actress mistaken for a hooker by cops, by David K. Li; New York Post, Sept. 14, 2014]

Narrative Collapse: Watts turns out to have been having public sex with her husband in a car. [Django actress in ‘racist’ stop was having sex in car: cops, by David K. Li; New York Post, Sept. 15, 2014.]

Derbyshire pointed out that many outrages against “justice” some of which have provoked riots, have this “Narrative Collapse” form, once all the facts are known.

Narrative Collapse: Martin actually was a burglar. (He was suspended from his school for possession of stolen property and burglary tools.) His last act was an unprovoked attack an adult who looked at him suspiciously.

Narrative Collapse: Henry Louis Gates was actually breaking into his house. It doesn’t matter if it’s his own house, he needs to explain why to the police, who want to know if he’s been evicted, or if he’s been locked out by his wife. Gates’s first words to Officer Crowley, when Crowley showed up at his door were “Why, because I’m a black man in America?” When Crowley asked to speak to him outside he said “Ya, I'll speak with your mama outside!” [Police report]

Narrative Collapse: Brown was a 6'4", 292 pound thug who had just been robbing a convenience store, and had tried to seize the officer’s gun. (Aside from the fact that a 292 pound thug can kill you with his bare hands, Breitbart reports 57 Police Officers Fatally Shot by ‘Unarmed’ Suspects Since 2000, by Robert Wilde, August 30, 2014. If someone is reaching for your gun, that’s the same, in self-defense terms, as if he was reaching for his own.

Narrative Collapse: Rodney King was driving drunk at 100 MPH and violently resisting arrest—a better term for him would be “ex-convict” since he robbed a Korean storekeeper with the aid of a tire iron. Jurors asked to convict police of excessive force saw “a 230-pound, six-foot-three-inch man, with a 0.19 blood alcohol level (0.08 is legal intoxication), acting wildly and lunging at policemen, four of whom he actually threw off.” [Think A Second Time, byDennis Prager, pp 117—120]

Narrative Collapse: Reports on the 15 black men show that they were mostly dangerous maniacs, many of them armed with guns and shooting them at, or into police. Of course, some of them didn’t have guns—the maniac with the brick might have been taken alive, but not the maniac with the nail-studded two-by-four, or the maniac with the axe who killed a 15-year old black girl before the police got him. See Cincinnati: Another Diversity Disaster – More to Come? By Sam Francis on April 19, 2001, and Stories of 15 black men killed by police since 1995, By Dan Klepal and Cindi Andrews, The Cincinnati Enquirer, April 15, 2001.

The prizewinner among people whose deaths black Cincinnatians should have been ashamed of protesting was Daniel Williams, who flagged down Kathleen Conway's police cruiser on Feb. 2, 1998. Williams hit her in the face and shot her four times in the legs and abdomen with a .357 before grabbing the steering wheel of her cruiser and shoving her into the passenger seat. Conway fired back, killing him. Officer Conway, now retired due to her injuries, is a heroine. But Williams’s death was nevertheless one of the 15 that rioters were protesting in 2001

Narrative Collapse: Edward Jay Epstein looked in to this in the New Yorker, and discovered (a) only 10 members of the Black Panthers had been shot by the police (rather than other Panthers) and (b) "six of the ten Panthers were killed by seriously wounded policemen who clearly had reason to believe that their own lives were in jeopardy." [The Black Panthers and the Police: A Pattern of Genocide?New Yorker, February 13, 1971]

The Duke Lacrosse hoax, and the case of Dominique Strauss-Kahn are a different kind of Narrative Collapse—so far I’ve been talking about alleged police injustice to blacks. The Narrative Collapse is that the blacks are actually guilty, and the police not really racist.

When the Duke Lacrosse Team was indicted for rape on the word of a drug-addicted prostitute (with no physical evidence) and Dominique Strauss-Kahn was arrested on the word of an African refugee hotel maid (again with no physical evidence) it turned out that white people were not guilty, and the police were being racist—acting on the anti-white stereotypes of Hollywood movies. (I called my article on l’affaire Strauss-Kahn Overkilling The Mockingbird, In The Heat Of The Night, By The Green Mile.)

The case of Django Unchained’s Danielle Watts resulted in an instant narrative collapse, in which the same NY Post reporter who reported the “racist” arrest also reported the uncomfortable facts the next day.

Most of these other collapses of the narrative took longer, and weren’t widely reported. You see, the MSM and the Left are the ones controlling the narrative, and in the Rodney King era and during the Cincinnati riots, they were still in control. They’re much less in control now, and that’s because of internet reporting and analysis of the kind we do here.

In a column about the legacy of the Civil Rights movement, I described this as “fighting against fairness and justice” That's the story of modern Civil Rights activism—a lot of it involves fighting not for justice, but against it. Did you know that the man whose arrest sparked the 1965 Watts Riot was guilty of what he was arrested for? (Drunk driving, like Rodney King: Marquette Frye, Whose Arrest Ignited the Watts Riots in 1965, Dies at Age 42, By Burt A. Folkart, December 25, 1986)

While the facts of all these cases have become known, I’m sure many of you can say that you read it here first, that you weren’t being told these things by your local news organizations.

That’s why our continued survival is important to you–and why we’re asking you to donate to keep us alive—to keep up your access to the facts in the case.