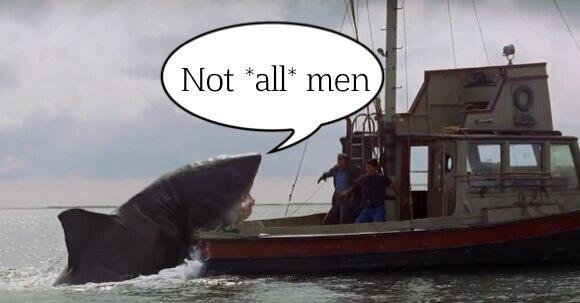 "Not All Men!" Is Scorned, But Why Are We Expected To Say "Not All Muslims" , Etc?

The feminists at Jezebel   have a post about why it's nonsense for men, when feminists say "men do x", to say "Not all men."

The universe holds immutable truths: matter cannot be created or destroyed, an object in motion will stay at motion unless acted on by an outside force, and any time a woman points out sexist bullshit, some hero's opinion will gallantly ride in on a fedora, chiming in "Not All Men!"

Now, thanks to the internet's collective sillybrain, Not All Men! has gone from an irritating trope to a funny, giddy skewering of point-missing folks whose knee jerk reaction as part of a privileged group is to defend themselves against implications that they, as members of the complained-about privileged group, might be complicit in the status quo. It's defensive bullshit that doesn't really do anything but prove the bearer of Not All Men is more concerned with saving face for themselves than, you know, actually acknowledging the concern that another person is expressing. In the Not All Men mind, it's worse to be called sexist than to actually be a victim of sexism. Here are some typical places to find Not All Men in the wild:

Of course, while she's describing specifically male behaviors, committed mostly by men (in some cases also by a few aggressive lesbians) her belief is that it's wrong to ask feminists not to slander all men. This is the exact opposite of what we're supposed to think about minorities and women, though. Bad drivers? Not all women! Weaker and less effective at fighting than men? Not all women!

Also, of course, Muslim terrorism and minority crime—hijacking planes and bombing people? Not all Muslims! Flash mobs and crime? Not all blacks!("Not all blacks" was a major talking point used to bash John Derbyshire  after his "Talk" article.)

See I refuse to say ‘not all Muslims.’ Who’s with me?, by Kathy Shaidle, January 11, 2011.  (Kathy also likes to point out that during WWII no one said we were at war with either "not all Germans" or "not all Japs." )

Of course, the key here is "privilege"—men are "members of the complained-about privileged group", so they are not allowed to protest.

This goes double for white men, about whom you can say anything.

As I wrote last year

Joan Walsh, a Nice White Lady who is “editor at large” at Salon, commented that whites had no business complaining about racial epithets (even if they preceded what in one way or another was actually a hate crime) because

“no social order has ever been devised whereby African-Americans oppress people they deride as 'crackers'.”[Crackers, please… | Who cares if Trayvon Martin called George Zimmerman a “creepy ass cracker”? White grievance-mongers, that’s who, June 27, 2013]

This, of course, is not true, any more than it's true that no social order has ever been devised whereby women oppress the men they deride as privileged sexists :

Not actually happening—see The Campus Rape Myth, Heather Mac Donald, City Journal Winter 2008. The one case she mentions of a genuine rape, as a counterexample to the mythical ones is this:

Just as a reality check, consider an actual student-related rape: in 2006, Labrente Robinson and Jacoby Robinson broke into the Philadelphia home of a Temple University student and a Temple graduate, and anally, vaginally, and orally penetrated the women, including with a gun.

Philadelphia's Temple University  is near  black inner-city, as is Columbia University in New York.[ Man Is Arrested In Torture Of Student At Columbia, By Andy Newman, New York Times,  April 21, 2007] Derbyshire rules apply. So yes, not all men.

Right again! It's not all men, it's mostly Hispanic men. See  Diversity Is Strength! It's Also…Ethnic Come-ons By Athena Kerry.

Once again, it's not all men. Members of non-Asian minority groups are much more likely to commit domestic violence. Nicole Brown Simpson (Mrs. O. J. Simpson) could explain that to you—if she were alive. Perhaps Derbyshire rules apply to marriage, too.

All right, I admit that bosses are mostly men, and even mostly white men, although from the point of view of the bosses, it may be "Female employees who,  once you get them started,  don't shut up."