Immigration Watch Canada Asks: Why Should Richmond, BC Become a Chinese Colony? 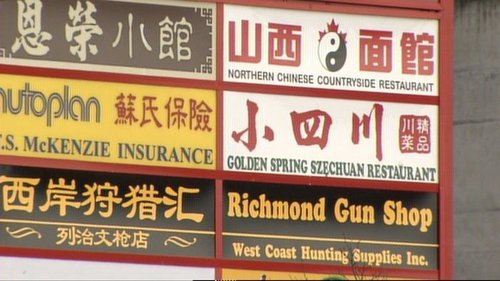 Richmond, British Columbia is on the west coast of Canada, north of Seattle. It's a city of 190, 000 which is more than 60 percent immigrant, most of those Asians, and more than 50 percent of those Chinese.

That means it's starting to resemble a Chinese colony, and one noticeable fact is that you are starting to see signs in stores which are in Chinese only.

A recent public meeting was held to discuss this.

Immigration Watch Canada has posted a column asking the basic question—why did the Government of Canada let a whole city go "majority-minority" in the first place.

Richmond : The “Canary” in Canada’s immigration coal mine

The Richmond Forum on Chinese signs on March 12 demonstrated the large gap between what the Richmond public and the Richmond political class want to see happen in Richmond. It also showed the indignity that Richmond citizens and all other Canadians will continue to endure unless federal politicians assert Canadian sovereignty over Canada, dramatically reduce Canada’s immigration intake to serve Canada’s interests, and declare that immigrants adapt to Canada’s two official languages.

Richmond is the proverbial “Canary” in the coal mine. It is the first Canadian city where immigration policy has caused the existing population to become a minority and where the immigrant population has publicly and significantly declared its dominance. This is the very negative result of Ottawa’s immigration intake tsunami and of Ottawa’s refusal to monitor and do anything about it. Most importantly, it is the result of Ottawa’s refusal to abide by the most basic of all national survival instincts : Never allow a country’s existing population to become a minority.

About 100+ people attended the Richmond Forum which was organized and chaired by the Simon Fraser University Centre for Dialogue. It lasted two hours

Since the Forum was announced a month ago, it has been clear that Richmond City Hall has tried to limit discussion and to control attendance.

From the beginning of the meeting, however, it was also clear that a significant part of the Richmond public is dissatisfied with the thousands of Chinese signs in Richmond and with the bigger issue of high Chinese immigration. It feels Richmond’s political class wants to do as little as possible about the public’s concerns.

The meeting first looked at how Richmond can promote cultural harmony. The Chair asked attendees to identify things that contribute to cultural harmony. Attendees pointed out that such things as communication, a common language, etc. had to be observed. A number stated that these fundamentals had not been observed and that, as a result, a large amount of tension exists.

It also became clear that the City had instructed and pressured its staff and a significant number of others to attend the Forum in order to control the agenda and to control dissension. The Chair soon switched the meeting to several Richmond bureaucrats who spoke about the work they had done on counting Chinese signs, the different locations (interior and exterior), the cluttering on signs, the small number that were Chinese-only, the existing bylaws on signs, the problem with enacting a bylaw, etc.

The Chair then had UBC Geography Professor Dan Hiebert speak about his research. The Chair praised Hiebert, but did not mention that Hiebert is an immigration cheer-leader and, like most academics, seldom if ever questions Canada’s intake but instead focuses on how immigrants fare and adapt. Hiebert described the efforts of three places which were dealing with a similar sign issue : Sydney and Melbourne, Australia; and Richmond Hill, Ontario. Richmond Hill had actually passed a bylaw requiring that English or French comprise half of the lettering on a sign. It was implied that this might be the solution to conflicts in Richmond.

The last of the speakers was Richmond’s Head of Social Planning who has probably played a significant role in suppressing dissent, in tolerating the signs, and in accepting the Richmond public’s descent into minority status.

At the end of two hours, the Chair stated that the comments made at the meeting would all be sent to Richmond Council which would decide what action to take.

Richmond residents were left to think about several things :

(1) Why did residents have to complain about Chinese language signs and have to ask Richmond politicians to tell Chinese businesses to give a prominent place in signs to one of Canada’s official languages? Long ago, shouldn’t Ottawa and every Canadian city, Richmond included, taken the initiative and have very clearly told all of Canada’s new immigrants, that Canada had two official languages, that Chinese was not one of them and that businesses should not be using the Chinese language in their signs? Instead, through the muddled thinking in its multiculturalism policy, Ottawa has implied to these new immigrants that “anything goes” and that Chinese was as acceptable as either English or French.

(2) Why had Ottawa not decreed long ago that it would never allow its existing population in any community to be overwhelmed by immigrants and to become a minority? Why had it never decreed that self-preservation was a fundamental in any society? Why did it not recognize that failure to abide by this fundamental principle would lead to the very significant resentment and racial conflict that now exists? Why does Ottawa not see that if its cowardice in dealing with this issue continues, the result might well be civil war over control of many Canadian cities whether the city is Richmond or any in a long list of other cities?