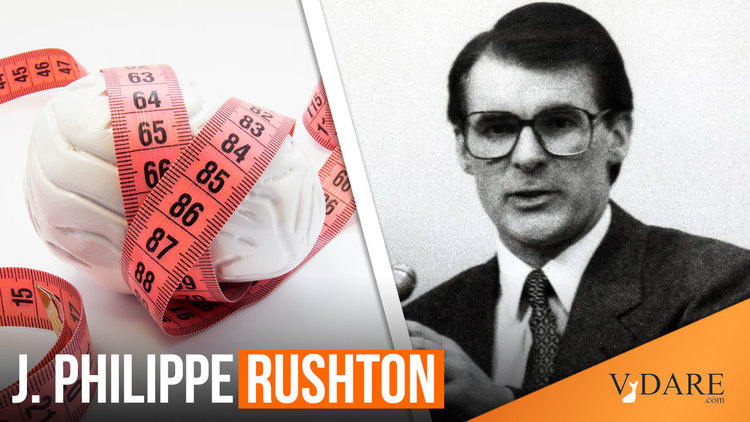 Brain Size, Canadian Anti-Racism, And The Liberals Who Can't Remember How LONG They've Been Running Things

From two Canadian journalists in Quillette, objecting to the modern trend of journalists being allowed to just make stuff up:

On February 6th, the Toronto-based Globe and Mail newspaper ran an opinion piece titled “Complacent Culpability” (or “Canadian Complacency Is the Killer of Collective Change,” as it appears online). The author, Rachel Ricketts, describes herself as “a spiritual activist and mystic disruptor seeking liberation for Black and Indigenous women, femmes and non-binary folx.” In a passage about systemic racism in Canada, the author related an episode during her kindergarten schooling in British Columbia when “my white teacher attempted to hold me back from Grade 1, explaining to my mother that my Black brain wasn’t as large as those of my white classmates. The sentiment apparently derived from her teachers’ manual in 1989.”

If true, this would be quite shocking. While 1989 may seem like a long time ago to young readers, it wasn’t exactly the antebellum era. It strains credulity that such a manual, if it were ever employed by British Columbia educators, were still in use in the late 20th century. It was clear from the comments that appeared below the column that other readers, too, considered this a strange claim. One self-identified former teacher wrote, “I taught from 1979–2013 and never heard of any [such] manual. Furthermore, it is inconceivable that any [provincial] ministry document from that era would have contained such a gross generalization, physiological or otherwise, based on race.”

The Globe and Mail has sometimes been described as Canada’s newspaper of record. And this seemed like a serious journalistic error on a matter that the author herself rightly describes as being of national importance—specifically, systemic racism. So, we wrote to the Globe’s public editor, Sylvia Stead, indicating that it was “impossible to believe that in 1989, a teaching manual in Canada would spout disproven pseudoscience … Did the editors who vetted this piece ask Ms. Ricketts for some evidence that this claim—because it is not an opinion, but a statement of checkable fact—is true?” We pointed out that this kind of dubious claim unfairly maligns the education system and the teachers who work within it. By presenting the case for systemic racism on the basis of dubious facts, it also detracts from the credibility of other, more realistic, claims made by writers (Ms. Ricketts included) about the difficulties faced by non-white people in our society.

Ms. Stead, a Globe veteran who became the newspaper’s first public editor nine years ago, told us she agreed that the dubious claim had been stated “as fact”; and then, in a subsequent message, told us, “we have fixed the reference. I think the writer meant it as a recollection and not a fact, and frankly, that should have been caught by an editor. I spoke with the editor about it and he agrees. Appreciate hearing from you. It’s a good teaching moment.”

The new version reads as followed: “In kindergarten, my white teacher attempted to hold me back from Grade 1, explaining to my mother that my Black brain wasn’t as large as those of my white classmates. The teacher claimed it was from her teachers’ manual, and had my mother not threatened to sue the school board my educator’s racism would have scarred my academic record from its inception.” There’s also an editor’s note at the bottom that reads, “This article has been updated to clarify that there is no evidence a teacher’s claim was in a manual.”

In other words, the “fix” effectively consisted of inserting the word “claimed” in reference to the unsupported statement. Yet the corrected version still indicates that the teacher’s racism was informed by the sort of educational environment in which one might reasonably expect such a teaching manual to be used. While such terms as “claim” (or “suggest” or “allege”) can be used to protect a writer (and his or her editor) from the accusation that they are peddling falsehoods, they typically don’t protect readers from coming away misinformed.

[When Journalism Blurs Into Activism—A Canadian Case Study, by Paul Benedetti and Wayne MacPhail, May 3, 2021 (Emphases added, links in original)]

Their main point is that there is no reason to believe this was ever in any teachers manual, which is true.  But they still seem to believe that brain size isn't real, and that any reference to it is "disproven pseudoscience."

Here are some points:

That is, the same year Ms. Ricketts says lower black brain size was the standard explanation in a Vancouver teachers handbook, Japanese-Canadian science journalist David Suzuki, born in Vancouver, was attacking Rushton in a debate, saying "There will always be Rushtons in science, and we must always be prepared to root them out."

In Canada, that would be 1855.  Canadian anti-racism was mostly theoretical in 19th and early 20th century, with no blacks to be racist too. During the actual Civil Rights period, years before Ms. Ricketts  was born, comedian/activist Dick Gregory went to her city of Vancouver and was quoted as saying "There is absolutely no bias in Vancouver. I know because I just had dinner with your Negro."

I prefer the honest declaration of outright American racism rather than the covert cruelty from Canadian racists. I have been called a n----r through looks, action or inaction more times than I could ever recall. Including from white Canadians I loved. And that racial violence hurts more because, like most Canadians, those people don’t believe themselves to have an oppressive bone in their body and are thus unwilling to do a damn thing to address their harm.

To paraphrase something Orwell said, you have to have an enormous brain to believe in that much imaginary racism. No ordinary person could be such a fool.