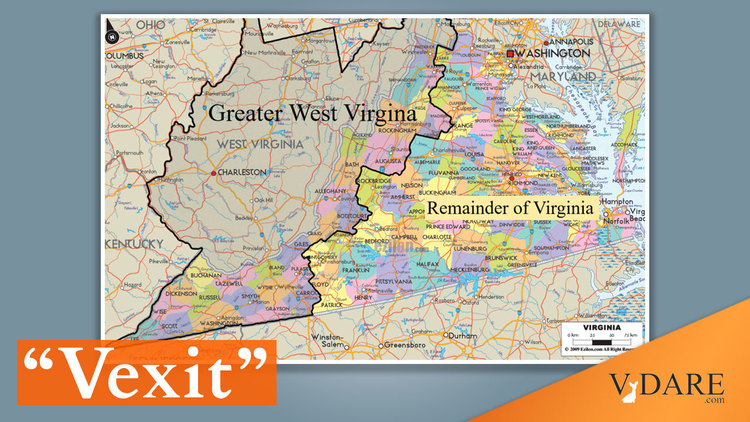 Secession, At Least At The State Level, Is Now On White America’s Agenda

As VDARE.com anticipated, five more Oregon counties voted May 18 to secede from the state and join a “Greater Idaho,” to the obvious dismay of liberal journalists who console themselves that the movement can never prevail [Oregone? 7 Oregon Counties Vote To Back Seceding, So Citizens Can Vote GOP In Idaho, by Bill Chappell, NPR, May 21, 2021]. 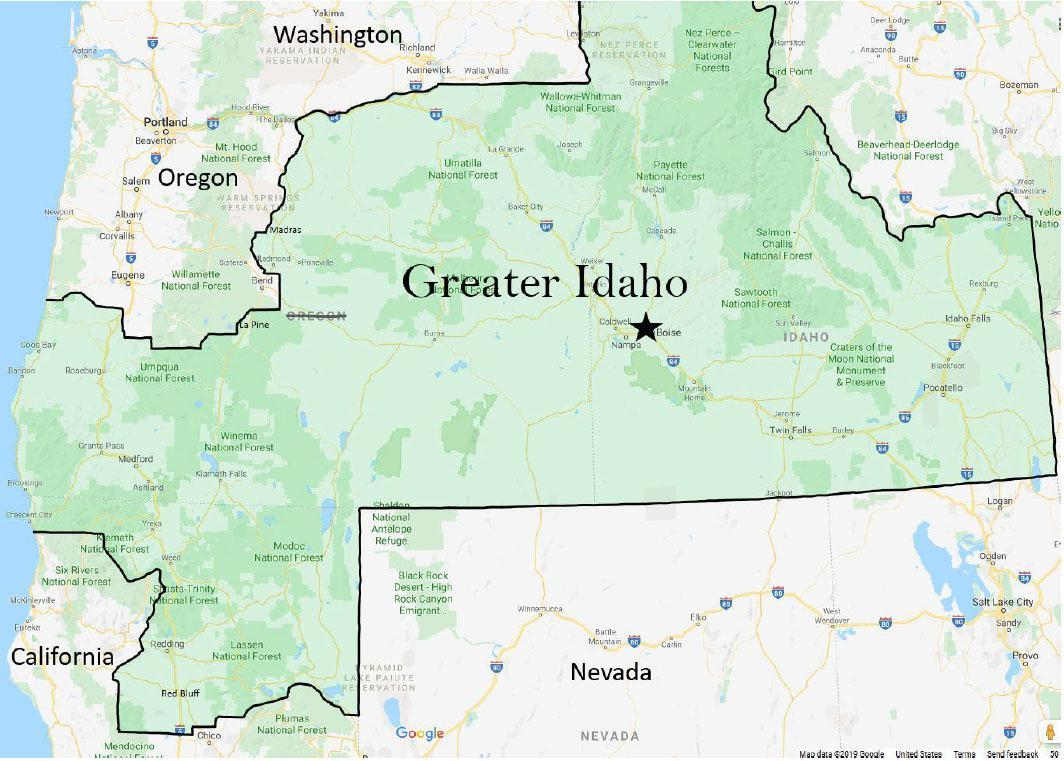 But “never” is a long time—and miracles happen quite often in politics. Secession, in one or other of its many forms, is unmistakably occurring to more and more Americans as the answer to political polarization and immigration-driven racial division [Secession fever spikes in five states as conservatives seek to escape blue rule, by Valerie Richardson, Washington Times, February 19, 2020].

But most current secession talk is generally not national, but at the state (sometimes city or county) level. Thus the late Sam Francis, who was a Southern Unionist, criticized always simmering neo-Confederate secessionism as An Infantile Disorder, arguing that “the main political line of division in the United States is not between the regions of North and South (insofar as such regions can still be said to exist) but between elite and nonelite.” But even Francis conceded:

It makes sense that over time some borders and jurisdictions will become outmoded, and to redraw the map every now and then to suit contemporary interests and needs is unobjectionable…

Indeed. Most of those movements today do not anticipate leaving the Union. Yet the new separatists are rightly angry, and rightly feel threatened. And for precisely the reason Francis cited, those movements are vital to the safety and preservation of the Historic American Nation.

Nor were they planning to designate Republican street protesters “domestic terrorists.” Nor had the party officially placed angry, anti-American immigrants, like Minnesota’s Ilhan Omar or Washington State’s Pramilla Jayapal, in a position to become enablers of The Great Replacement.

Paul Sperry tweeted this in January:

DEVELOPING: Democrats in both the House and Senate are planning to draft legislation to classify MAGA rallies as “domestic terrorist activity” and require the FBI, DOJ & DHS to take steps to prevent such “domestic terrorism.” Sen. Durbin is leading effort along with Rep Schneider

AFP factcheckers denied it, as if anyone believed them, but it’s consistent with the idea that Trump’s last rally on January 6 was somehow terrorist….and the account Paul Sperry tweeted it from has been suspended by Twitter.

Beyond that, something shows why Americans should and do openly discuss secession/separation: demographics. The Republican and Democratic Parties now represent racial coalitions that have remarkably little in common. Unless the GOP turns out historic numbers of white voters, urban Democrats will almost always outvote rural Republicans nationally, with the Electoral College the only hope that the GOP can win a presidential election, as happened in 2000 and 2016. 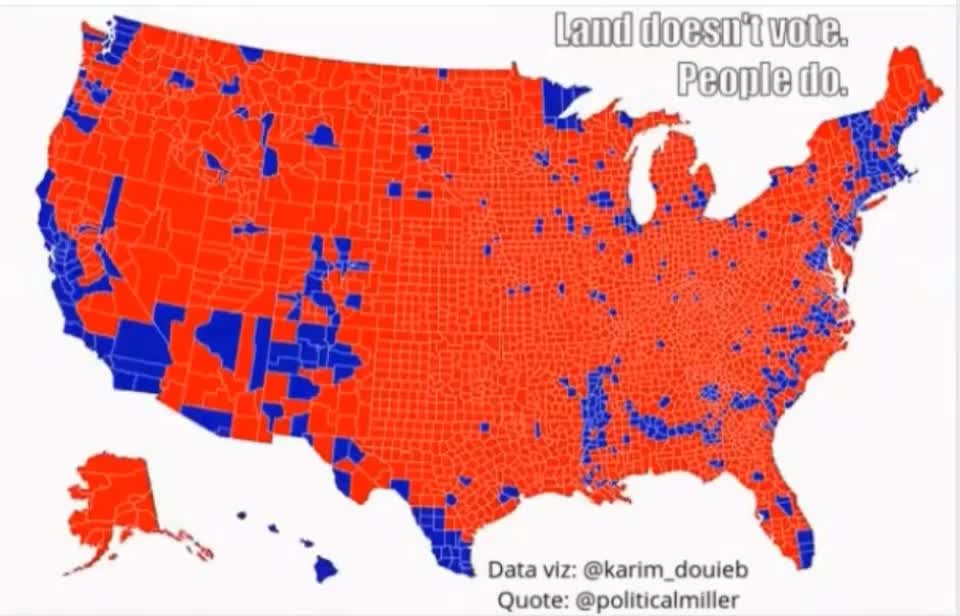 Granted, Donald Trump’s victory showed that Francis’ mostly white Middle American Radicals, acting in their own interest, can win at the ballot box. But now Biden has four years to continue encouraging mass immigration and Electing A New People. Fast-tracked to citizenship, they will outnumber and outvote the Historic American Nation that elected Trump. The Electoral College will be no defense if Texas turns blue.

At the state-level, the picture is similar. For example, ninety-five percent of Virginia’s counties are Second Amendment sanctuaries, yet the Radical Left controls the state. White conservatives are, as a practical matter of statewide policy, voiceless in Virginia.

America’s Founders were aware of this danger, which is why U.S. states used to have various internal balancing mechanisms, notably legislatures weighted to rural interests. But in the 1960s that was destroyed by the U.S. Supreme Court (Earl Warren, proprietor) in a number of decisions, notably Reynolds v. Sims (1964), based on the simplistic mantra of one-man, one-vote. These rulings meant that there was no institutional mechanism to protect the various communities within a state from the “Tyranny of the Majority,” as the U.S. Senate and the Electoral College do at the national level. (Which is why the Left hates them.) As with many 1960s reforms—immigration, the 1965 Civil Rights Act, the Sullivan evisceration of libel law, criminal justice “reform,” arguably female jurors—it has taken time for the disastrous results to become clear. Now they have.

Legacy Americans are terminally weary of tyrannical control by unhinged Leftists and their immigrant auxiliaries in major cities:

The Texas Nationalist movement, pushing Texit since 2005, appears quite active. It claims nearly 400,000 supporters. Unlike other separatist movements, Texit is an actual secession movement that envisions becoming a separate country. U.S. Rep. Randy Webber supports it and said so on Facebook with a secession meme on November 7 [Renewed Calls for “Texit” Are Growing. Will They Go Anywhere?, by Sabra Ayres, Spectrum News 1, December 31, 2020]:

Difficulty is, the state could turn blue by 2024. If so, the next round of elections might mean two new Democrats in the Senate. Secession would stop that, but secession by 2024 isn’t going to happen. And whenever Texas turns blue, Texit will be dead. A blue state will not unplug from the Deep State.

That would leave Texit backers to push for the separation of the Lone Star State’s largely red rural regions from its urban south. Were that to happen within the Union, all the new state’s congressmen and senators could be Republicans.

Red-State Secession cites an important reason the rural areas of Virginia should secede—perhaps the most important, long-term: guns.

The site’s Second Amendment Sanctuary map shows just how little influence gun owners in the state have, even though, again, 95 percent of Virginia’s counties are 2A sanctuaries. If those counties remain tied to NoVa, Richmond, and Tidewater, residents might lose their gun rights.

Another possibility: a new state of Appalachia.

The administrator of the Separate State Model on Facebook (from which VDARE.com is blocked) argues that the counties in Virginia are too large to join another state and must form their own.

“NOVA tilts the Commonwealth to Biden,” Josh Slagle wrote on November 4. “The idea that Virginia should separate isn’t because of politics, however it is the politics of it that highlight the cultural divide of all of Virginia in comparison with NOVA”—

We’re talking about a geographic area that spans 90% of Virginia, not just a few counties. That isn’t something you just join WV or TN over, that’s something you create a new state over. 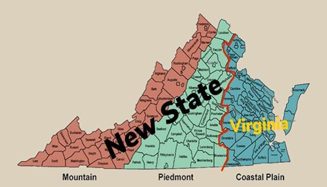 The Coastal Plain region of Virginia is home to more than half of the entire population of the Commonwealth. With 3,150,000 of the total population of 8,520,000 people living in Northern Virginia alone. That’s not including the cities of Virginia Beach and Norfolk. This leaves the fate of millions of other Virginians in other regions to the mercy of a population [whose] culture is significantly different than ours.

The Western Maryland Initiative, with 9,000 Facebook likes, proposed a similar separation years ago, although the page appears dormant. Formed in 2013, its members said they were tired of urban Leftists ignoring their concerns, and they’re fed up with subsidizing high-crime Baltimore [Western Marylanders push to secede from state, Fox News, February 2014].

A new page with 330 members appears to have taken up the cause.

Then there’s Florida’s Flexit and California’s Calexit. Even Golden Staters don’t want to stick with the union if they can’t run it. When Trump was elected, support for California’s leaving the Union jumped from 20 percent to 32 percent [Calexit: The Secession of California, by Will Kenton, Investopedia, October 8, 2018]. Three years ago, Californians nearly voted on a ballot measure to break the state in three. The state Supreme Court kicked it off the ballot [Measure to split California into three states removed from ballot by the state Supreme Court, by Maura Dolan, Los Angeles Times, July 18, 2018].

Yes, the effort failed. But it did have enough support to get on the ballot and force Leftist Kritarchs to veto it.

Secessionists and separatists at the state level face serious obstacles. The Leftists who run those states might never permit breakaway counties to form new states that would increase GOP representation on Capitol Hill. Nor would a Democrat-controlled Congress be disposed to accept a new state that boasts an impregnable majority of Historic Americans. They would denounce such as a state as “racist” and “white supremacist.” GOP Cheneyites would get the vapors. Furthermore, unlike the Stupid Party, which has traditionally supported, for instance, statehood for Puerto Rico, the Democrats aren’t prone to electoral suicide.

That said, just ignoring America’s increasing cultural, religious, and political fragmentation cannot go on. The aftermath of the 2016 e lection has exposed the Democrat Left for what it is: irredeemably anti-white, anti-Christian, anti-American Cultural Marxist totalitarians. Its political demands are objectively evil. No normal American, meaning a member of the Historic American Nation, can accede to those demands. Debates over the public weal are no longer merely political, over such matters as the correct minimum wage or how many fighters to buy for the Air Force. 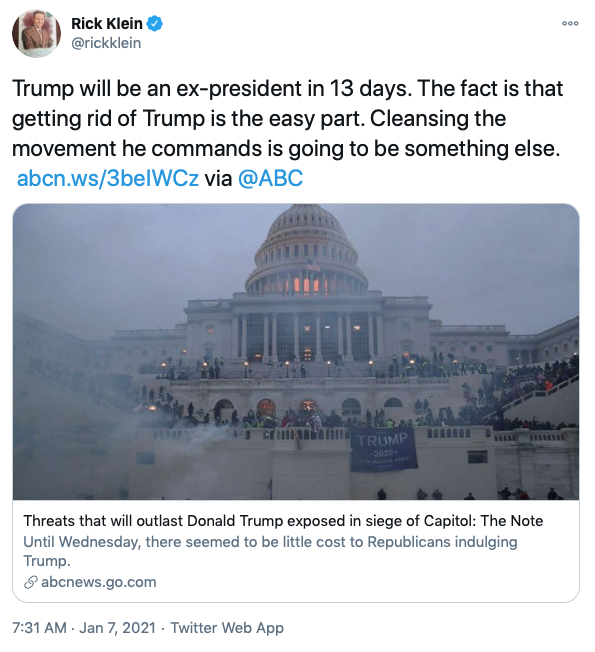 Debates that would have been considered galactically absurd as late as 1995 are now routine: drag queens in the ladies’ room, and whether Christian bakeries and photographers can turn away business from homosexuals. Opponents of Open Borders and the Great Replacement are anathematized, if not ruined professionally and financially. The “political” debate now concerns what it means even to be an American on the one hand, and the very nature of what it means to be a human being on the other. Never Trumpers, Deep Staters, and both political parties’ elites view Trump voters—the nonelites—as enemies to be crushed, “re-educated,” and/or murdered, as they made clear in the run-up to and aftermath of November 3. They hate us, and they say so.

Michael Anton is the Robert Brasillach of our times and deserves the same fate https://t.co/eJNOF49qTa

I hate Donald trump and if you like him: I hate you too.
Now what. https://t.co/XzGTiqBCSE

The dark irony of it all would not be lost on Sam Francis. Where secession precipitated war in 1860, blocking secession might eventually precipitate violence today.

Unless the Pelosis are right, and the Historic American Nation can be hectored into submission.