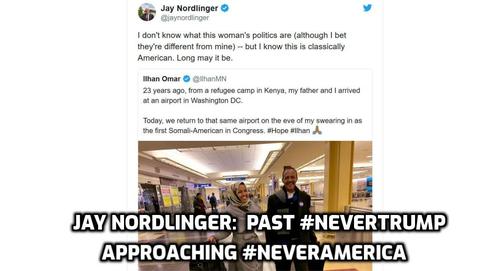 Roll Over, Jay Nordlinger! Ilhan Omar Is NOT “Classically American.” And She Never Will Be.

Fox News host Tucker Carlson might have been channeling VDARE.com last week when he spoke an obvious truth about Minnesota Rep. Ilhan Omar, a Muslim refugee from Somalia. As our own A.W. Morgan argued exactly a month ago, mass immigration doesn’t just mean electing a new people who might overwhelm the Historic American Nation. It also means giving those hostile immigrants a voice in national affairs when the still-white majority, motivated by guilt, accepts them into Congress.

Carlson couldn’t put it quite that way, of course. But he got close when explained that the resentful, anti-American ideologue is the result of Open Borders:

Congresswoman Ilhan Omar, herself a symbol of America's failed immigration system if there ever was one, someone who hates this country coming here at public expense, spent yesterday demanding the abolition of ICE, the decriminalization of illegal immigration itself, and an end to all deportation programs. She demands Open Borders, the unlimited arrival of anyone who wants to come to America whether they have anything to contribute or not and, by the way, you get to pay for it. And if you don't want to, you are a bigot.

And this wasn’t the first time Carlson put the Muslim congresswoman on notice that he’s watching her. After she told Vogue Arabia in March how awful Trump’s America is, Carlson offered this:

[Tucker Carlson: Ilhan Omar ‘Repays Her Adopted Country’ by Attacking It as ‘Hateful and Racist’, by Josh Feldman, Mediaite, April 1, 2019]

Ilhan Omar is the first Somali-American Congresswoman and a principled progressive leader.

Tucker Carlson is a Warren Jeffs fan with a big microphone handed to him by his dad.

Media Matters’ Madeline Peltz answered not just with a silly tweet, but a screed that said Carlson’s “championing of white grievances earned him the accolades of neo-Nazis.” [Tucker Carlson's descent into white supremacy: A timeline, May 21, 2019]

As well, Media Matters’ Jordan Uhl tweeted, Carlson is “extremely xenophobic” for noting the obvious: immigrants, particularly penniless refugees, should be grateful to the country that took them in.

Carlson does not seem intimidated. He has returned fire in a segment about immigration that included scenes from the frightening swarm of African illegals at a French airport. “France does not belong to the French,” one said. “Everyone has a right to be here.”

Tucker covering the Illegal Immigrant Protest in Paris & how that may be America's future too:

"To Gillibrand & her friends on the Left, America is not a nation its a piñata filled with 200 years of treasure, 'get some quick before its gone!'" pic.twitter.com/6w3OfqHzGY

Carlson reminded everyone that Open Borders Democrats, and not just Muslim refugees like Omar, agree: “Kirsten Gillibrand would agree with that. ‘America for Americans? That’s racist. You don’t deserve your own country.’”

It’s important to realize that Carlson’s critique of Omar differs, daringly, from the conventional Conservatism Inc. take. We’re supposed to believe that Omar is merely the product of “socialism” or kooky college professors. And, of course, Congresscritters Left and “Right” fussed and fumed when she rightly said that AIPAC influences politicians with money, and some Israel supporters evince dual loyalty. These remarks inspired the Democrat-controlled Congress to condemn such “anti-Semitic” remarks—without, such is the identity politics vice in which Democrats find themselves, naming Omar. [The Ilhan Omar anti-Semitism controversy, explained, by Zach Beauchamp, Vox, March 6, 2019] Indeed, Democratic leaders worked “white supremacists” into that resolution—with no opposition, needless to say, from the GOP.

Let’s go to her outright hatred of the country and the Historic American Nation.

Consider the hijab, which signals her disdain for the historic American nation. She says she began wearing it after the 9/11 terror attacks to show her “otherness,” and emphasize that America is a false land of promise. [Glorified and Vilified, Representative-Elect Ilhan Omar Tells Critics: ‘Just Deal’, by Sheryl Gay Stolberg, The New York Times, December 30, 2018] She notoriously dismissed  the 9/11 attacks as merely a day when “some people did something.” [New York Post rips Rep. Ilhan Omar over 9/11 comments., by Christal Hayes, USA Today, April 11, 2019].

Remember that our invade-the-world-invite-the-world neocon cucks celebrated this hijabbed African arriving on the floor of the House of Representatives:

“I don’t know what this woman’s politics are (although I bet they’re different from mine),” National Review’s Jay Nordlinger tweeted, “but I know this is classically American. Long may it be.”

I don't know what this woman's politics are (although I bet they're different from mine) -- but I know this is classically American. Long may it be. https://t.co/ZVPN3GJZmn

If a senior editor at NR truly didn’t know what Omar’s politics were, maybe he shouldn’t be a senior editor, but anyway, the election of Omar wasn’t “classically American.” She took her oath on the Koran.

Maybe now that Omar and Tlaib are openly expressing contempt for Israel and even forming an anti-Israel phalanx on Capitol Hill, neocons line Nordlinger will reconsider what “classically American” means.

Omar thinks her adopted country was “founded by the genocide of indigenous people and on the backs of slaves,” and “that we maintain global power with the tenor of neocolonialism.” [Unity Will Take Generations, by Ilhan Omar, Time, August 17, 2017] What a fine patriotic sentiment the “principled progressive leader,” as Media Matters’ Peltz called her.

And of course Omar also thinks the government must stamp out “white nationalism” i.e. any American criticism of herself and her agenda:

We have to find the root causes of domestic terrorism. We need gun reform to keep innocents safe. We need to be honest about how social media has made it easier to radicalize young men. And we need to talk about how white supremacy, sexism & racism perpetuate the problem.

Even worse, she tweeted:

The proliferation of white-nationalist websites is frightening evidence that there are others out there with similar extreme beliefs. National security strategies must aggressively encompass this internal threat.

We all know what this means. Tucker Carlson—and VDARE.com—must shut up or else.

And she even wondered why no one says “America” in the same menacing tone as they say “al-Qaida.” [Rep. Ilhan Omar Laughs at Americans for Fearing al-Qaeda, The Blaze TV, April 12, 2019]

Omar also has a soft spot for Somali terrorists. She pleaded for leniency for the Somalis convicted of planning to join ISIS [Rep. Ilhan Omar asks judge for compassion in ISIS recruit sentencing, Fox9.com, Nov 10, 2016]. Harsh sentences contribute to terrorism, she claimed, and the only real solution is “inclusion.” The Somali community in her district is a notorious hotbed for Islamic extremism and has produced more ISIS recruits than any other place in the country. [How Minneapolis' Somali community became the terrorist recruitment capital of the US, by Hollie McKay, Fox News, February 16, 2019]

Along with Omar’s open contempt for the country that took her in, her outrightly hard-left agenda is also driven by her race-based identity politics.

Further, strong majorities of blacks and Hispanics support the criminalization of hate speech and believe it is an “act of violence.” They also believe that defending the right to utter hate speech is just as bad as the “racist” words. [The State of Free Speech and Tolerance in America, by Emily Ekins, Cato Institute, October 31, 2017]

For that matter, a majority of non-whites don’t support Israel;  just 22 percent of Hispanics and 19 percent of blacks see Israel as an ally [New Poll Shows Support for Israel Plummeting Among U.S. Liberals, Millennials and Women, by Chemi Shalev, Haaretz, October 26, 2018]. Curiously, this does not yet seem to have affected American Jewish attitudes to immigration.

Which is why closing the borders is so important. As Carlson noted, Omar wants to abolish ICE, increase immigration, practically eliminate border security, and make asylum claims easier, a guaranteed path to becoming like the Third World from which she escaped with the help of American taxpayers. Why is that? Millions more Third World immigrants will swamp the historic American Nation, become a force multiplier for the existing minority wing of the Democratic party, and help push through all those anti-white, anti-American policies.

Now, recall Omar’s threat of a few weeks ago: “This is not going to be the country of white people.”

By “white people” she means Tucker Carlson and the readers of VDARE.com.