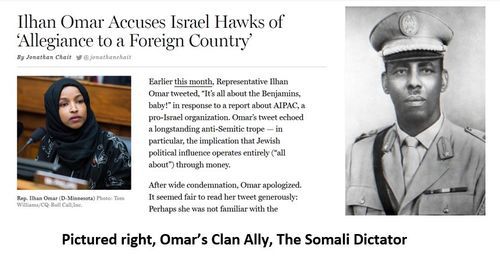 In contrast to Israel supporters, recent iSteve regular Rep. Ilhan Omar (D-Mogadishupolis) has NO “allegiance to a foreign country.” Somalia is no longer a country.

Nor is Rep. Omar motivated whatsoever by any tribal rivalries, because all true Somalis belong to only one tribe. Instead, Rep. Omar’s sole allegiance is to the Majeerten Clan. From Wikipedia:

Omar is Muslim[19] and belongs to the Majeerteen clan from Northeastern Somalia.

Long may the House of the Majeerten increase in number! (Especially in New Puntland along the headwaters of the Mississippi.) America’s highest national priority must be importing more Majeerten, because they are Who We Are.

From Wikipedia on the Isaaq Clan, who are rivals to Rep. Omar’s Majeerten Clan:

Sheikh Isaaq bin Ahmed was one of the Arabian scholars that crossed the sea from Arabia to the Horn of Africa to spread Islam around 12th to 13th century. It is said that sheikh Isaaq is to have been descended of the prophet Muhammad through his daughter Fatima. …

As Rep. Omar has so often pointed out, the pervasive influence in Washington of AIPAC, The American-Isaaqi Public Affairs Committee, must be exposed!

From CityPages on why Rep. Omar is a refugee from Somalia:

… Omar was born into a village of her own, the youngest of seven.

Her mother died when she was little. Men would shape her. Three older brothers, father Nur Omar Mohamed, and her grandfather, Abukar, especially.

Aunts and uncles worked as civil servants and educators. Omar’s father trained teachers. Theirs was a blessed life as Somalia began the transition from European colony to independence.

Her grandfather rode the winds of change to Italy, where he attended university. He returned to his East African homeland, becoming Somalia’s National Marine Transport director. Abukar oversaw the string of lighthouses along the Arabian Sea coastline.

Privilege accompanied this kind of pedigree. Books and culture were priorities inside the home, which was more like a compound, complete with domestic help. In a country where 80 percent of the population farmed and raised livestock, Omar started kindergarten at age four.

But Somalia was a fragile country. Civil strife soon threatened to swallow it.

About 12 million people occupy this land about the size of Texas. It’s overwhelmingly Muslim. Genealogy unites and divides.

Somalis belong to clans. These ethnic cliques can be about geography or marriage. Some possess age-old beliefs of superiority and consider members of sub-clans unsuitable for marriage, even friendship.

In 1991, the reign of Somali President Siad Barre imploded. The country had had enough of his Cold War-style military dictatorship. 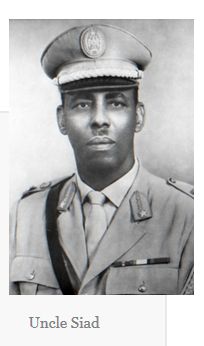 Siad Barre had one of the last of the closely cropped Dictator Mustaches.

Barre was ousted, the national army disbanded. The ensuing vacuum devolved into a war among clans, turning neighbors into enemies. Omar witnessed this firsthand when she was eight years old.

Nighttime fell as about 20 people milled about the compound in Mogadishu, the Somali capital. Bad noises outside announced unwelcome visitors. Men with big guns demanded to be let in. The group tried to bust down the front door, but it was unbreakable. Omar and her family fell to the floor moments before the militiamen let go a staccato of gunfire. Once they were satisfied with the evening’s damage, the attackers left.

Everyone survived. Omar hasn’t forgotten the sight of bullet pockmarks in the building’s cinderblock walls.

“That was a hard realization for my grandfather, that our family was no longer welcome,” she says. “Even after the attack, he struggled with this new reality.”

Days later, they put their familiar world in the rearview mirror. They split into groups, 20 people in total fleeing.

And why were folks so sore at dictator Siad Barre’s allies, such as the Rep. Omar’s family? Well, one reason might be a topic in Wikipedia that I had never heard of before:

The Isaaq genocide or “Hargeisa Holocaust”[15][16] was the systematic, state-sponsored massacre of Isaaq civilians between 1987 and 1989 by the Somali Democratic Republic under the dictatorship of Siad Barre.[17] The number of civilian deaths in this massacre is estimated to be between 50,000-100,000 according to various sources,[1][18][9] whilst local reports estimate the total civilian deaths to be upwards of 200,000 Isaaq civilians.[19] This genocide also included the levelling and complete destruction of the second and third largest cities in Somalia, Hargeisa (which was 90 per cent destroyed)[20] and Burao (70 per cent destroyed) respectively,[21] and had caused up to 500,000[22][23] Somalis (primarily of the Isaaq clan)[24] to flee their land and cross the border to Hartasheikh in Ethiopia as refugees, in what was described as “one of the fastest and largest forced movements of people recorded in Africa”,[25] and resulted in the creation of the world’s largest refugee camp then (1988),[26] with another 400,000 being internally displaced.[27][28][29] The scale of destruction led to Hargeisa being known as the ‘Dresden of Africa’.[30] The killings happened during the Somali Civil War and have been referred to as a “forgotten genocide”. …

It’s almost as if sometimes there are reasons why certain refugees had to flee for their lives from the people back home who know them best.

According to Mohamed Haji Ingiriis, the vicious atrocities during the reign of Barre were not an isolated event nor unusual in Somalia’s history. Barre also targeted the Hawiye. But, states Ingiriis, Barre’s extermination campaigns against other clan groups reflected the deep seated historic cycles of repressions by the clan that gains dominant power then marginalizes other clans.

Fortunately, America’s new Coalition of the Fringes, whether Majeerten-Americans or Isaaq-Americans, have the KKKrazy Glue of evil straight white male Core Americans committing all those hate crimes to unite them in voting Democratic.