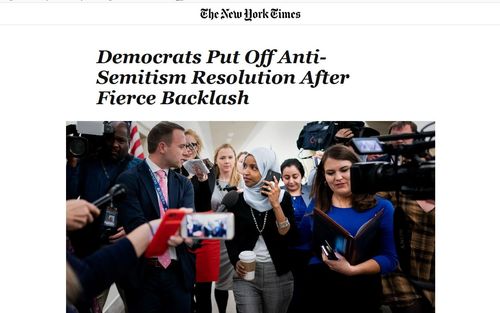 In Coalition of the Margins news, from the New York Times:

Some Democrats say Representative Ilhan Omar is being singled out as a woman of color while Democratic leaders have let slide other racist and bigoted remarks.

WASHINGTON — House Democratic leaders have put off a vote on a resolution condemning anti-Semitism and bigotry after a backlash from rank-and-file lawmakers who said Representative Ilhan Omar, whose comments gave rise to the measure, was being unfairly singled out.

… As House Democrats questioned why their leaders had not moved earlier to condemn President Trump for his own racially charged comments, Mr. Trump weighed in on Twitter. Seeking to exploit divisions among Democrats, he chastised them for not taking an immediate and strong stand on anti-Semitism.

“It is shameful that House Democrats won’t take a stronger stand against Anti-Semitism in their conference,” Mr. Trump wrote. “Anti-Semitism has fueled atrocities throughout history and it’s inconceivable they will not act to condemn it!” …

But Mr. Trump has been accused repeatedly of trafficking in anti-Semitic tropes. His 2016 campaign tweeted out an image of Hillary Clinton in front of a Jewish star, over a pile of money. …

Earlier in the day, Democrats, including some prominent African-Americans, confronted Speaker Nancy Pelosi at a testy closed-door meeting, demanding to know why they were being pushed to pass the resolution when bigoted comments by Republicans have gone unchallenged. …

In other words, Democrats suddenly realized they could unite their feuding Coalition of the Fringes around the assertion that Republicans are the Real Racists! Why haven’t the Democrats ever before stumbled upon this solution to their internal problems?

“Islamophobia needs to be included” in the anti-Semitism resolution, she told reporters on Wednesday. “We need to denounce all forms of hate. There is no hierarchy of hurt.”

Oh, yes, there is. But it’s just not in the Democrats’ interest to disclose the exact makeup of the Intersectional Pyramid, other than straight white gentile males are at the bottom.

… Instead, according to multiple people present, it turned into a gripe session over the treatment of Ms. Omar by her own party.

“What would be the appropriate level of punishment — a public flogging?” Representative Raúl Grijalva of Arizona, the chairman of the House Natural Resources Committee, asked in an interview after the meeting.

… The resolution began as a response to Ms. Omar’s suggestion last week that pro-Israel activists were pushing “for allegiance to a foreign country,” a remark that her critics say played into the anti-Semitic trope of “dual loyalty.”

… By Tuesday night, with members of the Congressional Black Caucus and the Congressional Progressive Caucus pushing back, it became clear to Ms. Pelosi that the measure would have to be rewritten to include a condemnation of anti-Muslim bias. (Ms. Omar, who has been facing accusations of anti-Semitic bias for weeks, has herself been the target of Islamophobic attacks, including a death threat in Minnesota.)

But that was not enough for many lawmakers, especially African-Americans who see Ms. Omar getting singled out as a woman of color, while Democratic leaders have let slide other racist and bigoted remarks — including those of President Trump.

Yeah, how come we never ever hear any Democrats criticize Trump? Huh?

According to several people in the room, a number of African-American representatives stood up to challenge Ms. Pelosi. …

Toward the end of the meeting, the first person said, Representative Cedric L. Richmond, Democrat of Louisiana and another African-American, asked why leaders were pushing for a resolution condemning bigotry while ignoring other pressing matters, like the treatment of young black men by the police.

Yeah, how come no Democrat has ever mentioned that black lives matter?

And Representative Jan Schakowsky, Democrat of Illinois, who is white, made a plea for members to think twice before taking to social media to express controversial opinions, or risk dividing Democrats in a way that enables Republicans to exploit those divisions. “Can we not do this on Twitter?” she asked to laughter.

It’s almost as if the Democrats have assembled an unstable coalition of hostile groups—Jews, Muslims, transgenders, black church ladies, tech billionaires, felons, etc etc—united only by their hatred of Core Americans.