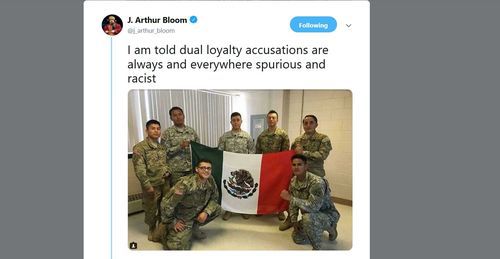 Patrick J. Buchanan: Is Diversity a Root Cause of Dual Loyalty?

"We can't be divided by race, religion, by tribe. We're defined by those enduring principles in the Constitution, even though we don't necessarily all know them."

So Joe Biden told the firefighters union this week.

But does Joe really believe that? Or does that not sound more like a plea, a wistful hope, rather than a deep conviction?

For Biden surely had in mind the debate that exploded last week in the House Democratic caucus on how to punish Somali-American and Muslim Congresswoman Ilhan Omar for raising the specter of dual loyalty.

Rebutting accusations of anti-Semitism lodged against her, Omar had fired back: "I want to talk about the political influence in this country that says it is OK to push for allegiance to a foreign country."

Omar was talking about Israel.

Republicans raged that Nancy Pelosi's caucus must denounce Omar for anti-Semitism. Journalists described the raising of the "dual loyalty" charge as a unique and awful moment, and perhaps a harbinger of things to come.

Yet, allegations of dual loyalty against ethnic groups, even from statesmen, have a long history in American politics.

The New York Times headline the next morning: 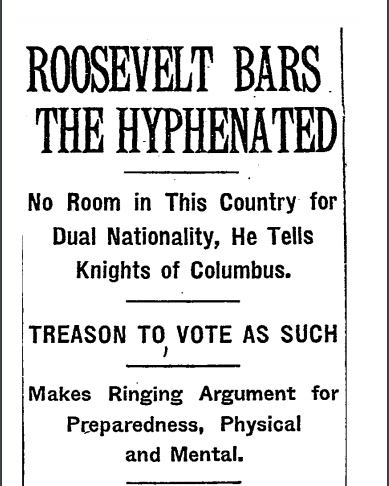 It continued: "No Room in This Country for Dual Nationality, He Tells Knights of Columbus. Treason to Vote as Such."

What would Roosevelt think of the dual citizenship of many Americans today? If someone is a citizen of more than one country, how do we know where his primary allegiance lies?

Nor was the Rough Rider alone in his alarm. As America edged toward intervention in the European war, President Woodrow Wilson, too, tore into "the hyphenates":

"The passions and intrigues of certain active groups and combinations of men amongst us who were born under foreign flags injected the poison of disloyalty into our most critical affairs. ...

"I am the candidate of a party, but I am above all things else, an American citizen. I neither seek the favor nor fear the displeasure of that small alien element amongst us which puts loyalty to any foreign power before loyalty to the United States."

In another address, Wilson declared:

"There is disloyalty active in the United States, and it must be absolutely crushed. It proceeds from ... a very small minority, but a very active and subtle minority. It works underground but it shows its ugly head where we can see it, and there are those at this moment who are trying to levy a species of political blackmail, saying: 'Do what we wish in the interest of foreign sentiment or we will wreak our vengeance at the polls.'"

What did Ilhan Omar say to compare with that?

Roosevelt and Wilson had in mind some German and Irish citizens whose affection for the lands and peoples whence they came made them adversaries of Wilson's war, into which we would soon be dragged by a WASP elite with deep ties to Great Britain.

Our Founding Fathers, too, were ever alert to the dangers of dual loyalty. In his Farewell Address, President Washington warned against a "passionate attachment" to any foreign nation that might create the illusion of some "common interest ... where no common interest exists."

Did FDR fear dual loyalty? His internment of 110,000 Japanese, mostly U.S. citizens, for the duration of World War II, suggests that he did.

Did not the prosecution of American Communists under the Smith Act, begun by Truman and continued by Eisenhower, suggest that these first postwar presidents saw peril in a secret party that gave allegiance to a hostile foreign power?

What defines us, said Joe Biden, are the "enduring principles in the Constitution, even though we don't necessarily all know them."

But if these principles, of which many Americans are not even aware, says Joe, are what define us and hold us together, then what is it that is tearing us apart?

Is it not the powerful and conflicting claims of a multiplicity of races, religions, tribes, ethnicities, and nationalities, as well as clashing ideologies, irreconcilable moral codes, a culture war, and conflicting visions of America's past—the one side seeing it as horrible and hateful, the other as great and good?

"Diversity is our greatest strength!" we are ever admonished.

But where is the evidence for what appears to be not only an inherently implausible claim but a transparently foolish and false one?