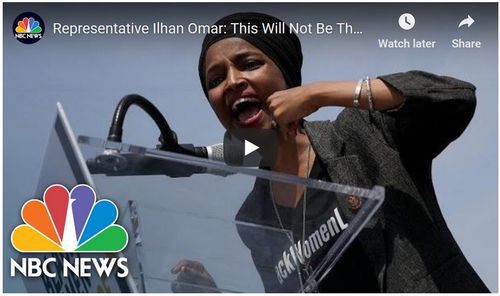 Rep. Omar: "This Is Not Going to be the Country of White People"

Today, the always quotable Rep. Ilhan Omar, bringing that Somali genius that has made Somalia synonymous with “wise self-government,” states:

Is that Angela “Acquitted of Murder” Davis behind her?

The Somalis are a pretty interesting group because unlike the Mexicans, who tend to act like, deep down, they know that the Anglos are better at governing than they are, and the Chinese, who tend to act like they’re willing to let the whites run the country awhile longer while they make money, the Somalis apparently love politics, or at least the glorify your ancestors and spit on your enemies part that has done so much for Somalia.

For example, Rep. Omar is in the U.S. only because the genocidal regime in which her whole family was employed (her grandfather at a high level) had made itself so hated by other Somalis that once the dictator fell, it was likely that the public would try to take vengeance upon the Omar family.

In turn, the media seems to love Somalis, especially spitfires in hijabs. Of course we should take political-moral advice from a Somali whose family had made itself so hated when it held the whip hand that they had to flee for their lives from their former victims.