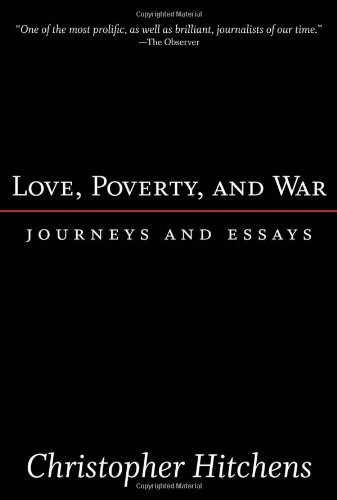 The "Poverty" section  includes Scenes From An Execution, published in Vanity Fair in 1998, in which Hitchens viewed an execution, and wrote up  his thoughts on it. I was startled by this:

"Most “advanced” countries in the world have abolished capital punishment. In order to be a fully signatory nation of the Council of Europe, for example, you have to show that you have wiped it from your book of statutes. The very first act of the Constitutional Court of liberated South Africa was to abolish the penalty of death."

Really? Was that a clever idea? Let's look at what we get when we Google "murder rate South Africa". You can find the latest figures here,and the SA government stats page opens with a pop-up asking if you have been a victim of a crime.

A recent story from inside South Africa says SA murder rate reflective of 'a war zone',News24, September 19, 2014, but I was drawn by this story from the BBC, at the time of the World Cup

South Africa is a place where a lot of violent crime happens. That much is hard to dispute. Each day an average of nearly 50 people are murdered. In addition to these 18,000 murders each year, there are another 18,000 attempted murders. Murder is a staple of the news. In April, it was white supremacist Eugene Terreblanche. [See Patrick Cleburne on Terreblanche's death.]

Earlier this month, it was Lolly Jackson, the flamboyant owner of the Teazers strip club chain, killed at a house in Kempton Park, just outside Johannesburg. In the run-up to the World Cup, British newspapers have been happy to convey a terrifying picture of South Africa. One recently told its readers about "Cape Town's culture of gangsters, drugs, rape, robbery and a murder every 25 minutes".[More]

Britain, which abolished the death penalty in the early 60s, saw the murder rate shoot up as an entirely predictable result, although it's on  recent downtrend. But the difference between the UK and South African murder rates is astounding:

South Africa has also had a recent downtrend in murders. In 2010, the BBC was writing reassuringly that

The first thing is that the South African murder rate is going down and not up. "Contrary to what many people think, the murder rate, while still extremely high, is down by about 44% since 1995. That's a huge decrease."

And of course, the 1990s was when Hitchens, an unreconstructed Leftist, was writing about "liberated South Africa."