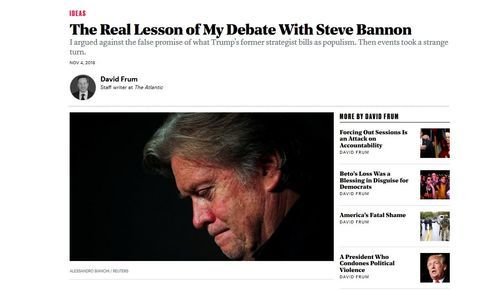 Why Does David Frum Think "Populism" Is The Kind Of Threat Communism Was And Islam Still Is?

David Frum recently debated Steve Bannon, and wrote a bit about why he thought doing so was a worthy use of his time:

"I’ve spent my life as a conservative, but what I’ve sought to conserve is not the Spanish Inquisition or the powers of kings and barons. I’ve sought to conserve the free societies that began to be built in the 18th century and that have gradually developed and strengthened—with many imperfections and hypocrisies and backsliding—in the 250 years since. When I was young, the most important challenges to those free societies seemed to come from Communists and Marxists. When I was not so young, the most important of those challenges seemed to come from Islamists. Today, they seem to come from—again, speaking politely—populists. The vector of the challenge changes, but the thing to be cherished and protected remains the same." ["The Real Lesson of My Debate With Steve Bannon," by David Frum, The Atlantic, November 4, 2018]

While I tend to dislike David Frum’s politics, I have never found him to be as obviously stupid as many of his fellow neocons and #NeverTrumpers, such as Max Boot or Jonah Goldberg. But this paragraph really blows me away. The implication he seems to be making is that populist right-wingers such as Donald Trump, Viktor Orbán, Matteo Salvini, et al, are moral equivalents both to the Muslims who fly planes into buildings and detonate bombs at teenybopper concerts; and the bloodthirsty USSR that killed tens of millions of people, and whose Cold War nuclear arsenal threatened the existence of human life on Earth. President Trump may not be your cup of tea, but it seems to me that only a very dedicated Leftist would imply such an equivalency.

On top of that, it is unclear to me why Mr. Frum—one of the men in President George W. Bush’s inner circle most hawkish regarding the War on Terror—thinks that the threat of Islamism has receded significantly since the 2000s, or been eclipsed by the threat of, as he says, “politely—populists.” Islamic terrorism still plagues the West. Surely I need not recite the dozens of horrific attacks across the West in the last few years? Mr. Frum and his ilk, in their heyday, thought the best strategy to fight back was to invade Middle Eastern countries. That did not work, clearly. It is the populists he deplores who have come up with a more effective, more ethical, and more cost effective strategy—let fewer Muslims into Western nations. If you really fear Islamic terrorism, move to Poland or Hungary, where rightwing populists reign and where Islamic terrorism simply never happens. The center and center-right governments of the West that Mr. Frum champions have not done anything about the problem, to put it politely. If anything, they have exacerbated the problem by further inflaming anti-West sentiment in the Middle East by invading their countries, and subsequently letting tons of angry Muslims into the West itself.

Finally, during the Cold War, the Democratic West compromised repeatedly with rightwing dictators across the globe in its effort to fight and defeat Communism: Franco in Spain, Pinochet in Chile, Chung-hee in South Korea, Kai-shek in Taiwan—to name only a few. Mr. Frum was fine with those compromises with autocrats, even many Democrats were, in the name of fighting Communism. If it was morally acceptable to align with them to fight Communism, why is it not morally acceptable to align with figures such as Orbán and Salvini, who are infinitely less authoritarian than Franco and company, to fight Islamism and the Left?

Mr. Frum, to his immense credit, is very opposed to Islamic immigration in particular, and broadly skeptical of mass immigration into Canada (his home country) and the United States (his adopted country), yet he detests seemingly every politician who actually addresses the issue. It is a curiously self-defeating Catch-22 of the kind that contemporary mainstream conservatives seem uniquely good at putting themselves into. The thing is, it needn’t be so tricky. Mr. Frum can simply compromise, the way everybody else with political opinions does… and the way he himself has done in the past.