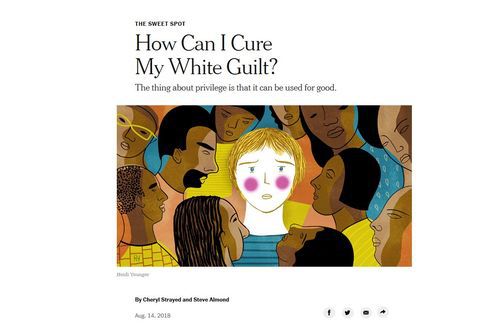 "Whitey" Asks NYT Advice Column: "How Can I Cure My White Guilt?"

From the NYT advice column:

How Can I Cure My White Guilt?
The thing about privilege is that it can be used for good.

Advice by by Cheryl Strayed and Steve Almond

Cheryl Strayed, author of the backpacking memoir Wild, was played by Reese Witherspoon in the 2014 movie adaptation. Steve Almond has published ten books.

I’m riddled with shame. White shame. This isn’t helpful to me or to anyone, especially people of color. I feel like there is no “me” outside of my white/upper middle class/cisgender identity. I feel like my literal existence hurts people, like I’m always taking up space that should belong to someone else.

I consider myself an ally. I research proper etiquette, read writers of color, vote in a way that will not harm P.O.C. (and other vulnerable people). I engage in conversations about privilege with other white people. I take courses that will further educate me. I donated to Black Lives Matter. Yet I fear that nothing is enough. Part of my fear comes from the fact that privilege is invisible to itself. What if I’m doing or saying insensitive things without realizing it?

Another part of it is that I’m currently immersed in the whitest environment I’ve ever been in. My family has lived in the same apartment in East Harlem for four generations. Every school I attended, elementary through high school, was minority white, but I’m now attending an elite private college that is 75 percent white. I know who I am, but I realize how people perceive me and this perception feels unfair.

I don’t talk about my feelings because it’s hard to justify doing so while people of color are dying due to systemic racism and making this conversation about me would be again centering whiteness. Yet bottling it up makes me feel an existential anger that I have a hard time channeling since I don’t know my place. Instead of harnessing my privilege for greater good, I’m curled up in a ball of shame. How can I be more than my heritage?

Personally, I find “Whitey” a little uninspired as a nom de plume for this otherwise quite accomplished missive. I think something like Yale Trollmaster (or, for short, Y.T.) would have been more imaginative.

Steve Almond: Shame and anger are powerful emotions, Whitey. And yet your central struggle is around identity. You write that you don’t know your place. In fact, your letter describes your place as a kind of prison cell of privilege. What you really feel is trapped within an identity that marks you, inescapably, as an oppressor. This feeling is especially acute right now, I suspect, because you’re suddenly immersed in a milieu that reflects your privilege back to you. We do live in a culture steeped in white supremacy and class bigotry, as well as patriarchal values. But the solution to this injustice isn’t to wallow in self-hatred. Instead, heed the words of the writer bell hooks. “Privilege is not in and of itself bad; what matters is what we do with privilege,” she writes. “We have to share our resources and take direction about how to use our privilege in ways that empower those who lack it.” You’re not going to empower others by disempowering yourself.

Cheryl Strayed: I think Steve’s onto something when he notes that your anxiety is acute now because the racial mix at your college is reflecting your privilege back to you, but I’ll go even further: My hunch is that you’re truly seeing it for the first time. You grew up in a neighborhood and attended schools where you were one of the relatively few whites. It’s possible your status as a situational racial minority gave you the illusion that you didn’t have much in the way of racial privilege. Now that you’re living in a community that, at 75 percent white, roughly mirrors that of the American population, you’re feeling the full force of what it means to be white in a white supremacist culture and it makes you feel uncomfortable because up until now, in some unconscious way, you’d exonerated yourself from it. You were the “good white person” because you grew up among people of color. Now you’re another white face in the crowd at your elite college, and ashamed of it.

Cheryl and Steve go on in this sententious vein quite a bit longer, without the slightest indication that they have any doubts about Whitey’s sincerity.

SA: As a straight white male … The rise of political actors and demagogues who promote white supremacy, misogyny and racism is, in part, an effort by the privileged to reject these truths. They’ve created an ecstatic cult of victimization and recast the pursuit of justice as an assault on their selfhood. But a nation founded on the ideal of equal opportunity will never fulfill its destiny unless those with power confront their privilege. Embrace that mission and it may become easier to accept yourself as flawed but sacred. You can’t change the story you were born into, Whitey. But you can be what bell hooks calls a “radical visionary” …

CS: You ask us how you can be more than your heritage, Whitey, but what Steve and I are suggesting is that you need to own it first. As you seem well aware, your race granted you privileges that were and are denied to people who are not white. This is true for all white people in America, no matter how racially diverse their childhood neighborhoods were or were not, no matter how much money their families had or didn’t have, no matter how difficult or easy their lives have been. Every white person should be ashamed of that injustice. Which is different than being ashamed of being white. You don’t have to relinquish your heritage to be an ally to people of color, Whitey. You have to relinquish your privilege. And part of learning how to do that is accepting that feelings of shame, anger and the sense that people are perceiving you in ways that you believe aren’t accurate or fair are part of the process that you and I and all white people must endure in order to dismantle a toxic system that has perpetuated white supremacy for centuries. …

When I was a kid, advice columnist Ann Landers would often get these letters of increasing absurdity from smartalec Yale trolls. It was such a tradition at Yale that letters to Ann Landers about actual problems would sometimes start, “I am not a Yale student and this is no joke.” (I don’t think the word “troll” had its current meaning back then; instead they were called pranksters or hoaxsters.)

Here’s one to Ann Landers in 1975 from a 52 year old girl named Esther who wants to be Ralph:

Dear Ann Landers: When I read your advice regarding the five-year-old boy whose mother put ribbons on his blonde curls and gave him a tea set for Christmas, I decided that maybe you could help me. too.

I am a girl. 52 years of age. My problems started when my father knitted me a pair of argyle sox for my fifth birthday Those sox did something to my life. Ann. From then on I wanted a crew cut. I refused to wear silk underwear like the other girls in my gym class and insisted on green jockey shorts. Now I hate dresses and I go everywhere in jeans and boots.

Lately I’ve been thinking of changing my name from Esther to Ralph But deep in my heart I want to be straight Is it too late for me?

Dear Gay: My spies have located you “In Connecticut” and would you believe they traced your letter to New Haven?

Eventually, Ann Landers figured out that anything postmarked New Haven was likely a put-on.

It would be interesting to resend old Yale troll letters to Ann Landers to modern advice columnists and see how many get the joke. I would imagine that the 52-year-old girl who wants to be crew-cut Ralph would be treated with vast deference today.