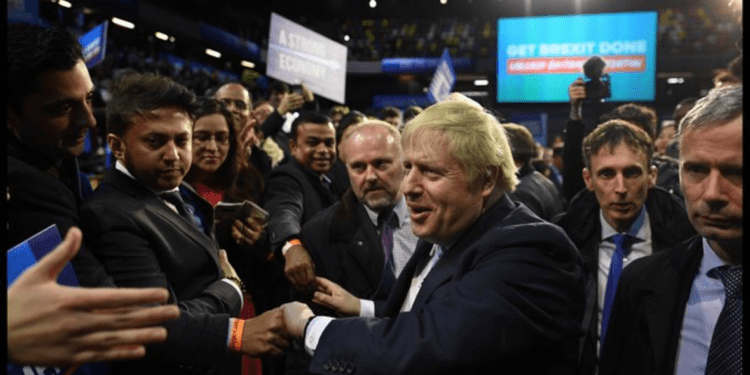 Patrick J. Buchanan: Will the Secessionist Epidemic Ever End?

Fresh from his triumphal "Get Brexit Done!"  campaign, Prime Minister Boris Johnson anticipates a swift secession from the European Union.

But if Britain secedes from the EU, warns Scotland's first minister Nicola Sturgeon, Scotland will secede from the United Kingdom.

Northern Ireland, which voted in 2016 to remain in the EU, could follow Scotland out of Britain, leaving her with "Little England" and Wales.

Not going to happen, says Boris. His government will not allow a second referendum on Scottish independence.

Yet the Scottish National Party won 48 of Scotland's 59 seats in Parliament, and Sturgeon calls this a mandate for a new vote to secede:

"If (Boris) thinks ... saying no is the end of the matter then he is going to find himself completely and utterly wrong. ... You cannot hold Scotland in the union against its will."

She has a point. If a majority of Scots wish to secede, how does a democratic Great Britain indefinitely deny them the right of self-determination?

Is Scotland fated to become for Britain what Catalonia is to Spain?

Where does this phenomenon, this continuing unraveling of old and proliferation of new nations, this epidemic of secessionism, end?

The most recent population explosion of new nations began three decades ago, when 15 republics of the USSR became independent nations. Soon, several of the 15 began to unravel further.

Transnistria seceded from Moldova. South Ossetia and Abkhazia seceded from Georgia. Chechnya sought to break free of Russia, only to be crushed. Since 2015, the Donbass has sought to secede from Ukraine.

When did secessionism begin? The Americans started it all.

The first great secessionist cause was the Revolution, when the 13 American colonies declared and won independence from the British crown.

It is solemnly declared today that our Revolution was about ideas, such as the equality of all men. But the author of the Declaration did not believe in equality.

Jefferson was a Virginia plantation owner, some of whose slaves were with him in Philadelphia. He described Native Americans in the Declaration as "merciless Indian Savages." The British are fraternally called "brethren" with whom we share "ties of a common kindred," but who have been "deaf to the voice of consanguinity."

I.e, our cousins have been deaf to the call of our common blood.

John Jay, in Federalist 2, before the Constitution was even ratified, spoke of the elements that formed the nation—"one connected country to one united people ... descended from the same ancestors, speaking the same language, professing the same religion ... similar in their manners and customs."

A second secessionist movement, six decades later, created a second American nation. Texans under Sam Houston rose up and ripped that vast province away from its young mother country, Mexico.

The third secessionist movement united 11 states that sought to create a new confederated nation outside the Union, as the revolutionary generation had created a new nation outside of Britain.

In the 19th century, a dozen new nations were created by Latin American secessionists of the Spanish and Portuguese empires who emulated the example of the Americans of 1776.

After 1945, colonies of the British, French, Portuguese and Belgian empires seceded to produce a baby boom of new nations whose most common characteristic seems to be that all receive foreign aid and all have seats in the U.N. General Assembly.

If the secessionism epidemic is to someday expire, then its causes will have to be addressed. And what are they?

Secessionism appears rooted principally in issues of national identity—ethnicity, religion, race, language, culture and "the mystic chords of memory"—most of which Jay identified as both uniting Americans and separating us from our British "brethren."

Yet these issues of identity appear not to be receding but rising in the Caucasus, Middle East, Africa and South Asia.

As more and more people identify themselves by who they are, and are not, secessions of people from each other will continue.

These are not inconsequential matters. In 1939, the question of whether 300,000 Germans in a Polish-controlled city, Danzig, should be restored to German rule led to the worst war in the history of the world.

The peace of mankind in the 21st century may well depend upon our ability to accommodate this inexorable secessionist drive to some degree.

Last week, Bougainville, a South Pacific island cluster of Papua New Guinea, voted 98%, in a nonbinding referendum for independence, to become the world's newest nation. Papua New Guinea won its own independence from Australia when Gerald Ford was president.

And the beat goes on.