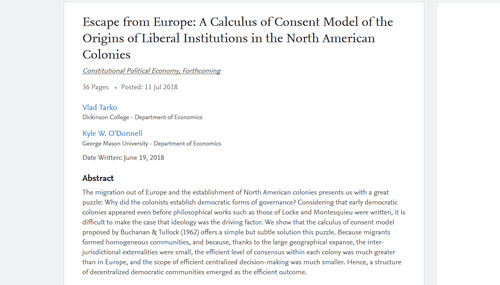 Lack of Diversity Encouraged Pre-1776 American Colonies to be Democratic

In 2018, “democracy” is largely viewed as being, more or less, a synonym for “diversity.” After all, they both begin with the letter “D.” But history may have other lessons. From SSRN:

Escape from Europe: A Calculus of Consent Model of the Origins of Liberal Institutions in the North American Colonies

The migration out of Europe and the establishment of North American colonies presents us with a great puzzle: Why did the colonists establish democratic forms of governance? Considering that early democratic colonies appeared even before philosophical works such as those of Locke and Montesquieu were written, it is difficult to make the case that ideology was the driving factor. We show that the calculus of consent model proposed by Buchanan & Tullock (1962) offers a simple but subtle solution this puzzle. Because migrants formed homogeneous communities, and because, thanks to the large geographical expanse, the inter-jurisdictional externalities were small, the efficient level of consensus within each colony was much greater than in Europe, and the scope of efficient centralized decision-making was much smaller. Hence, a structure of decentralized democratic communities emerged as the efficient outcome.