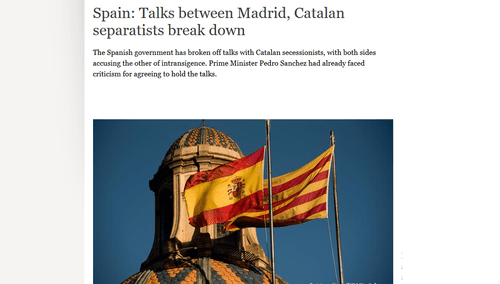 The secession crisis in Spain over Catalonia is erupting once again, as talks recently broke down between the separatists and the central government. Like Scotland, Catalonia is a left-wing "nationalist" movement.

Talks between the Spanish government and Catalan separatist parties ground to a halt before they even began on Friday, with both sides accusing the other of stubbornness.

Deputy Prime Minister Carmen Calvo said the pro-independence groups had refused to accept a framework for talks proposed by Madrid because they wanted an independence referendum included on the agenda.

"This proposal was an attempt to set the dialogue in an ordered, rigorous way, and with conviction," Calvo told reporters. "For years they have been asking for dialogue. We have done it. If that is not enough, we need to stop."

But in an impromptu press conference, Catalonia's separatist regional government claimed that it was Madrid that had broken off the talks.

Catalan Vice President Pere Aragones, of the pro-independence ERC party, claimed Sanchez had caved in to "Spanish nationalism, the right, and the far-right" by refusing to even discuss the issue of independence.

"We have not left the table, and we will not be doing that," said Aragones. "It is the [national] government that has broken and abandoned the space for dialogue. We didn't do it."

Unlike Scotland, Catalonia also has some fans among American conservatives and libertarians, as Catalonia is a prosperous region of Spain and its secession movement is interpreted by some as a push for economic liberation.

However, in the context of the Spanish right, Catalonian secession is a direct insult to Spanish nationalism. And Spanish nationalism is growing, partially because of the secession crisis, but also because of immigration. The Vox party is continuing to gain strength. In what is always a good sign, journos are also panicking after the party's recent gains in Andalusia.

The far-right party Vox won 12 seats (out of 109) in the elections, marking the first time they've made it into a parliament. The fact that it happened Andalusia, which has been ruled by the PSOE (Social Democrats) since 1982, was all the more surprising.

Until that point, it had seemed that Spain was somehow immune to the electoral rise of populist far-right parties that has spread over parts of Europe, like the Alternative für Deutschland in Germany or Italy's League party.

Political scientist Eduard Güell told DW that several factors had made this possible, including an "unexpectedly high" abstention rate (around 42 percent), resulting partly from a "demobilization of the left." The other issue, once again, is the divisive question of Catalan secession.

The Catalan crisis began almost 18 months ago, but there are still no political or legal solutions in sight.

Now that talks have completely broken down, the issue may force fresh elections. What is most significant is that Vox has formed a united front with other parties of the right. This is a contrast to the usual pattern of a cordon sanitaire in which the so-called center-right defends the system from a patriotic party (for example, the usual treatment of the Vlaams Belang in occupied Flanders, er, Belgium.)

Here, you have the parties of the Right defending a united Spain with one voice.

Opposition politicians from the conservative Popular Party (PP), the center-right nationalist Citizens (Ciudadanos) party and the far-right Vox party accused [Socialist Prime Minister Pedro] Sanchez of giving in to "blackmail" by separatists in order to secure their support for the budget vote.

PP leader Pablo Casado called Sanchez a "traitor" and told EFE news agency that the prime minister had "crossed all red lines; the legislature is totally over and the government is illegitimate." Casado also called for early national elections to take place.

Citizens and PP are organizing a rally in Madrid on Sunday to protest Sanchez, and the far-right party Vox has also called on its supporters to take part. The slogan of the march will be, "Elections now for a united Spain."

Citizens, PP and Vox have already become an effective counterforce to Sanchez's Socialists at the regional level. Following December elections in the southern autonomous community of Andalusia, the three parties teamed up to deny the Socialists governing power in their traditional stronghold.

The National Question is still dominating politics around the world. However, as Spain shows, the questions of nationalism, secession, and self-determination still revolve around ideas of Left and Right.