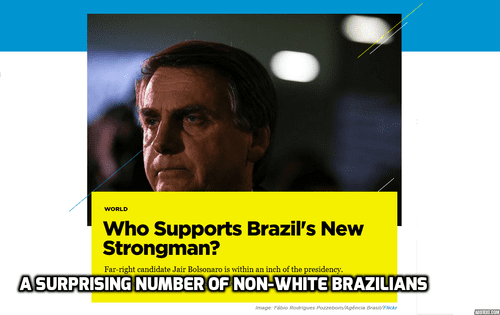 We constantly hear the Dem/ Main Stream Media Complex gloating that the US will be a majority non-white country by the 2040s. This prediction makes white Democrats hopeful as they naively envision a rainbow future of equality, love and electoral hegemony. It makes white Republicans despondent, as they see it as a harbinger of permanent Leftist rule and the destruction of the America they knew and cherished [Study: overhyped media narratives about America’s fading white majority fuel anxiety, By Matthew Yglesias, Vox, May 2, 2018]. But the election of Jair Bolsonaro as president of Brazil shows that even when whites are a minority—in Brazil they constitute just 47% of the population—people who value the future of the country can still win.

There is little question that becoming “majority-minority” will be bad for the US. The more ethnically diverse a society is the more conflict there is (see Ethnic Conflicts, by Tatu Vanhanen) and the less white (or Northeast Asian) it is, the less intelligent it is, meaning chaos, corruption, and out-of-control crime (see Intelligence: A Unifying Construct for the Social Sciences, by Richard Lynn and Tatu Vanhanen).

But Bolsonaro’s election seems to show that the political consequences of this might be paradoxical. Decades of Leftist and minority rule—riven by corruption, Politically Correct hypocrisy, incompetence, the over-promotion of low IQ minority workers, the mollycoddling of criminals (especially minorities), the belief that money grows on trees, and the suppression of people of industry and originality—seems to have led to such utter bedlam that people simply had no choice but to vote for a conservative and even a “far right” (read: “genuinely conservative”) government.

Even highly liberal people will find themselves adopting a rather more robust politics when their money becomes worthless and their house is robbed at gunpoint. The result, as in Brazil, is that all but youngest and “wokest” members of the middle class will vote for a conservative candidate and all but the butchest of Feminist females within this group do likewise.

Only professional people capable of living in a dream world keep voting for the Left in such conditions. 30% of Brazilian college graduates voted for Bolsonaro in the first round (presumably more in the second round) compared to 19% for the Workers Party candidate. [Who Supports Brazil’s New Strongman?, By Gianpaolo Baiocchi and Marcelo Silva, Boston Review, October 12, 2018]

Whites, once they are a minority, can be expected to increasingly feel under threat, meaning they will increasingly vote conservative as a block. In the southern state of Santa Catarina, which is about 85% white, Bolsonaro took 76% of the vote in the second round. In some cities in Santa Catarina, he garnered more than 80% of the vote and in one town he secured a 92% vote share [Where are the main Bolsonaro strongholds in Brazil?, By Felipe Ribas, Gazeta do Povo, October 30, 2018, ]. Even Rio de Janeiro, which is only 54% white, gave Bolsonaro 60% of the vote in the first round.

Whites and Pardos—“mixed” Brazilians, many of them about 80% white but identifying as “mixed” due to attendant social benefits—dominate the densely-populated south of Brazil. It was only Bolsonaro’s relatively weak performance in the non-white Northeast, populated by Quilombolas—slave-descended black peasants who have stayed on the land upon which their ancestors were slaves, mainly to farm bananas—that prevented him from winning in the first round. [Un-mappable Fascism By Freg Stokes, Overland, October 29, 2018 ]

And, unfortunately for the Left, when they’ve been in power for a long time and things have gotten very bad, people’s basic instinct for survival tends to hit in. Under anxiety-inducing conditions, we hanker after stability, often leading us to become more conservative and rule-following [Fear and Anxiety Drive Conservatives' Political Attitudes, By Bobby Azarian, Psychology Today, December 31, 2016] as well as more religiously fundamentalist.

Psychologists measure how religious people are with the so-called Fundamentalism Scale. This is comprised of a series of questions - on issues such as frequency of prayer or certainty of God’s existence – where subjects provide a response on a scale, such as 1 (“I pray every day”) to 5 (“I never pray”). Scores on this instrument correlate with scores on the “Right Wing Authoritarian Scale” (which rates you on more general conservative views, such as towards immigration) at 0.75, meaning that, to a great extent, religiousness and conservatism are the same thing [Predicting prejudice from religious fundamentalism and right wing authoritarianism, By B. Laythe et al., Journal for the Scientific Study of Religion, 2001].

In addition, people of low IQ tend to be coldly practical, disinterested in ideology; firmly focused on surviving and on hedonism. This is at least partly because the character trait social psychologists call “Openness-Intellect” (which makes you interested in the arts and ideas) is positively associated with IQ. People with low IQ also tend to have harsh and conservative social attitudes towards issues like crime or sexual deviance. (See At Our Wits’ End, By Edward Dutton and Michael Woodley of Menie, 2018, Chapter 2 and 5.)

For all these reasons, when Leftist-run life gets shambolic enough, even a significant minority of blacks will vote for candidates like Bolsonaro, even if they do remark on how many blacks (generally meaning quilombolas) are fat, lazy, and shouldn’t breed, (see the YouTube clip of “gaffes” below) because, unless they are feckless and happy to rely on Leftist handouts, blacks understand that order and combatting crime tends to make businesses easier to run, helping to put more food on your plate.

Among the non-white Brazilians—Pardo (mixed) and Preto (black, including quilombolas)—Bolsonaro still garnered 50% of the vote in the second round. At a bus stop in Recife, in the northeast, two elderly black ladies told Overland’s Freg J. Stokes, cited above, that they’d voted for Bolsonaro because he would stop the “bandits”—“I hate the bandits; I want to be safe on the street—just kill them all!”

The outskirts of Rio Di Janeiro resemble northeast Brazil, demographically speaking. These impoverished, gang-run areas are substantially Preto. But Stokes reports that the Bolsonaro vote was actually stronger there than in the wealthy, white centre and suburbs. It is only in the Northeast, where failing black banana farmers lack the future-orientation to migrate to the cities and have become welfare junkies, that Bolsonaro performed poorly.

Incredibly (or perhaps not), Brazilian pollsters haven’t reported what percent of whites voted for Bolsonaro in Round Two. But we can make an educated guess. Turnout in the white south tends to be about 89% (voting is compulsory in Brazil) while in the non-white northeast it is roughly 75%; the national average being 80%. [Compulsory For Whom? by Timothy Power, Journal of Politics in Latin America, 2009] Based on these figures, the Brazilian electorate is just over 50% white and 60% of whites voted for Bolsonaro, almost exactly the same as the 58% of whites who voted for Trump in a country where the white electorate is much larger. [Samantha Bee on the Whites Who Helped Elect Trump, By Neal Broverman, The Advocate, November 10, 2016] In other words, even when whites are a minority someone like Trump can still get elected.

Demographics is indeed destiny and (unless immigration policy is dramatically changed) there likely will be a time in the U.S. when a junta of virtue-signalling minority-manipulating Democrats will be able to take power. But, as always happens when SJWs wrest control, society will collapse into chaos. And when it does, Bolsonaro’s election suggests that even half of non-white voters will be prepared to elect a “far right” government to put things “right” again.

Note that America’s two-party system is no bar to this. Bolsonaro received 46% of the vote in the first round, knocking out a candidate to the right even of him, two pro-business candidates, and a libertarian. Even if only half of their votes had gone to Bolsonaro he would have exceeded 50% of the poll in the first round.

It is a law of political history from the Fall of Rome and the rise of Christian Europe to Britain’s Margaret Thatcher being followed by Tony Blair’s “New Labour”: Conservatism makes you wealthy, wealth makes you decadent, decadence makes you vote Leftist, Leftism leads to chaos and chaos needs conservatives to clear up the mess and make people wealthy once again.

So even as America darkens, it is not too “audacious” to have some “hope.”