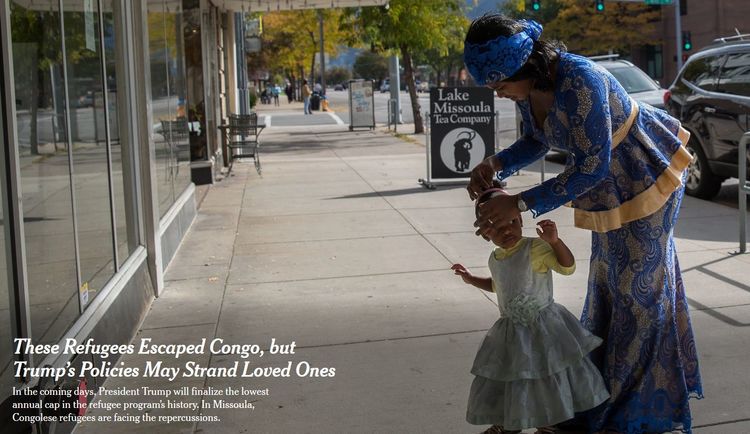 Does anybody notice that African refugees tend to be funneled to the most climatically absurd destinations in the U.S., such as Minneapolis, Lewiston, Maine, and now Missoula, Montana?

These Refugees Escaped Congo, but Trump’s Policies May Strand Loved Ones

In the coming days, President Trump will finalize the lowest annual cap in the refugee program’s history. In Missoula, Congolese refugees are facing the repercussions.

MISSOULA, Mont. — On his first day in this small college town cradled between the Flathead and Lolo national forests, Funugo Nsanzinfura made sure to submit the paperwork necessary for his daughter, Faith, and her mother, Ayingeneye, to join him in the growing community of Congolese refugees here.

The population of the Congo is currently said to be 87 million and growing two or three million per year. (Of course, in reality, nobody has much of a clue about the actual vital statistics of the Congo.) The notion that the United States can do anything about the problems of 87 million and counting Congolese via refugeedom is insane, but you’re not supposed to mention that.

… But the Trump administration’s move to slash the number of refugees admitted into the United States in the next 11 months by nearly a half has already canceled several planned refugee flights — including three this week — stranding more than 400 people cleared for transport and leaving Mr. Nsanzinfura in despair.

He is contemplating what was once unthinkable, a return to East Africa and the camp he finally escaped.

You never hear about sending African refugees to, say, Jackson, Mississippi, even though the climate is a lot better for Africans. That’s because Jackson is already 81.4% black, so there’s no money to spend on refugees.

To supporters like Mr. Engen, the Congolese are filling a void of cultural diversity in a town that is nearly 90 percent white. In the 1980s, Hmong refugees from Laos settled in Missoula. The children of immigrant families are usually the few students of color in city classrooms, while their parents work long hours at businesses eager for the help.

Cultural diversity and lower wages for workers … what’s not to like?