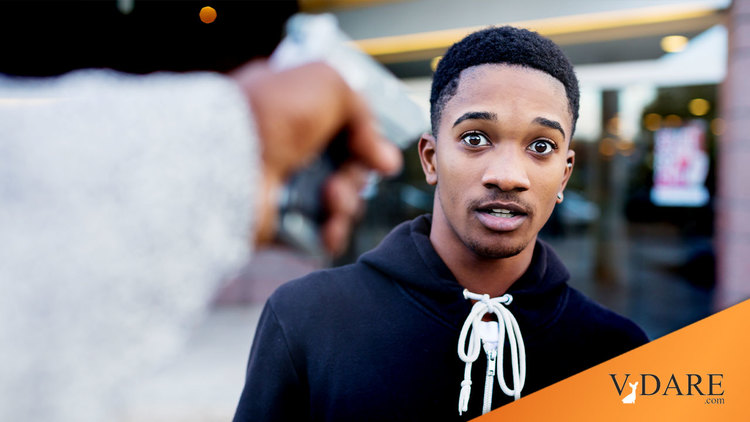 Patrick J. Buchanan: Who Is Killing 10,000 Black Americans Every Year?

"The problem of domestic terrorism has been metastasizing across the country for a long time now, and it's not going away anytime soon."

Since he became director in 2017, said Wray, FBI domestic terrorism investigations had doubled in number to more than 2,000, and FBI investigations of white supremacists had tripled.

Listening to Wray, one came away with the impression that right-wing terrorism was our foremost internal security issue, that the Jan. 6 riot was a manifestation of that terrorism, and that white supremacists top the list of dangerous enemies inside our own country.

The vast turnout of police and press for the Sept. 18 protest on the Mall to demand fairness for the Jan. 6 "patriots" suggested that our elites shared Wray's alarm.

All seemed disappointed when the brownshirts failed to show up.

Yet, with this week's release of FBI statistics on violent crime in America, showing a record 30% surge in homicides in 2020 over 2019, questions arise.

What caused the number of U.S. victims of murder and manslaughter to explode by almost 5,000 last year to reach a total of 21,500? Why are homicides rising another 10% this year? Why are murders and manslaughters rising so dramatically in the USA?

For that number of killings, 21,500 in 2021, is three times the number of U.S. soldiers dead in 20 years of fighting in Afghanistan and Iraq.

The New York Times and Washington Post both made the FBI figures front-page news. And the Times gave some insight as to who the victims of homicide in this country were and are.

Here is the relevant passage in the Times story:

The startling number here: there were nearly 3,000 more Black victims who wound up dead in America from criminal violence than there were white victims, though Blacks, at 12–13% of the U.S. population, are only one-fifth the size of the white population.

Translation: Black Americans are being shot, stabbed and beaten to death at a rate six to seven times that of whites. And by the end of this year, well over 10,000 Blacks will have been made the victims of homicide in America.

That figure breaks down to roughly 200 Black folks dead every single week in this country from gunshot wounds and other criminal violence—a weekly death toll that rivals U.S. losses in Vietnam at the height of the war.

The question unanswered and unasked in the Times' and Post's stories is: Who is doing this? Who is killing all these Black people?

If, as the slogan proclaims, "Black lives matter," why is there not greater public alarm at BLM in who is killing so many Black people?

About the number of dead in the infamous Tulsa Race Massacre of 1921, histories and historians differ. Some say the number of Black victims was no more than 30. Others say it was as high as 300.

But, again, in one year, the number of Blacks killed in violent crimes in America, 3-in-4 by gunshots, will exceed 10,000.

Who is doing this? How many of these Black folks are victims of the right-wing extremists and white supremacists that Wray sees as our greatest domestic security threat?

How many Blacks in 2021 and this year were victims of the Proud Boys or Oath Keepers or 3 Percenters or neo-Nazis or the Klan?

If rogue white cops are the scourge of Black America, as we have been instructed to believe, how many killings of unarmed Blacks were done by white cops this year and last?

In 2020, homicides in Washington, D.C., rose for the third straight year, reaching almost 200, the deadliest year in the city since 2004. More than 920 people were shot in 2020, a 64% increase from three years ago. Again, how many of these Washington shootings, averaging three a day, were the lethal work of Washington white supremacists?

Within the Post and Times there were explanations offered for the 30% surge in homicides. Among them were the proliferation of guns and gun ownership, and the "police legitimacy crisis."

In the wake of George Floyd's death, "Defund the Police!" became the chant of 100 leftist protests.

Police funds were cut. Elites turned hostile to cops they once hailed as "first responders." Demoralized, many police ceased to be proactive. Police resignations and retirements came in record numbers.

When the peace forces in our society were morally disarmed, their natural enemies, the criminal element, seized the opportunity.

Article
The Real Threat To U.S. National Security: Mexico Is a Failed State