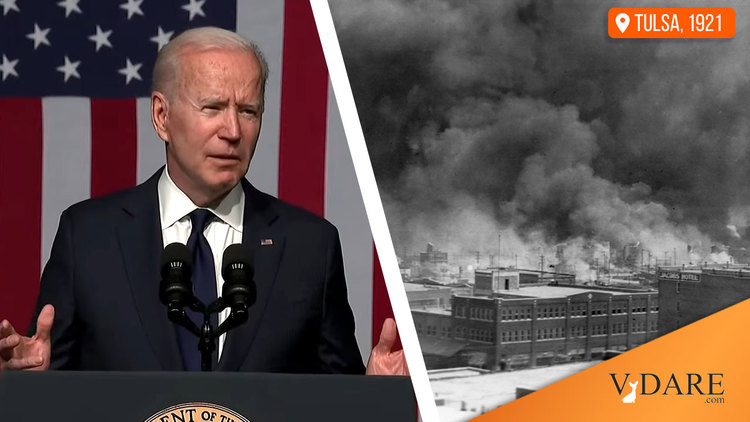 Excerpted from Kenn Gividen's latest Death Of White America column, to be published later this week

Joe Biden  made an emotional speech in Tulsa, OK decrying a "horrific" massacre the that took place 100 year ago, over 20 years before the 78-year-old Biden was born. Steve Sailer calls this "antiquarian" white guilt—see, for example: Antiquarianism: Apparently, White People Were Violent In 1918.

Herewith some more antiquarianism: One hundred years ago the USA was engulfed in a seven-year “race war.” It was a series of racial conflicts between blacks and whites. The riots began in 1917 when whites responded to a black-on-white murder in East St. Louis, Missouri. Scores of blacks were killed (some say as many as 200), and an estimated 6,000 blacks were displaced; forced out of their homes and out of the city.

Rioting peaked in the summer of 1919—dubbed “The Red Summer” by author/activist James Weldon Johnson—in which rioting occurred in nearly forty “battles” pitting armed blacks and whites against each other. Hundreds lost their lives as Americans divided themselves along racial fault lines. Many more were injured and thousands—mostly blacks—were left homeless.

The race war persisted through 1923 as rioting marred the cities of Ocoee, Florida; West Frankfort, Illinois; Perry, Florida; and Rosewood, Florida. Historians have chosen to emphasize the battle near Tulsa, Oklahoma where whites burned a large swath of the black Greenwood neighborhood. That incident has been reframed as an example of untethered white supremacy unleashed upon the nation’s “Black Wall Street.”

In reality, nearly every riot during this era was triggered by black-on-white crime. Whites responded with a vengeance only to be vilified by far-left historians as racist aggressors.

Max West points out on Unz.com that in popular depictions, like HBO's fantasy program Watchmen:

There is no hint that the riot began after 19-year-old Dick Rowland (who was black) was accused of assaulting 17-year-old Sarah Page (white). Similarly, there was no intimation that the initial round of violence in Tulsa—which killed ten whites and two blacks—appears to have been initiated by blacks, this being the incident that sparked the ensuing riots. I

While the seven-year American race war has been largely ignored by historians, its underlying cause—black-on-white violence—persists into the 21st century.