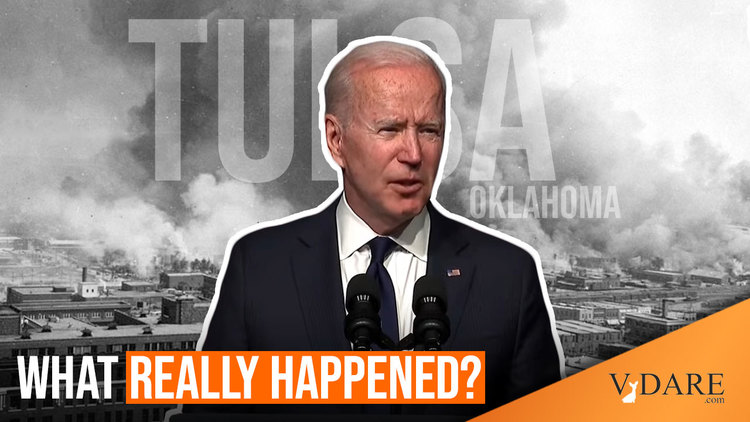 Besides the Tiananmen Square Anniversary, Monday and Tuesday marked the centenary of the 1921 race riot in Tulsa, Oklahoma. Our president actually went to Tulsa on Tuesday to give one of his embarrassing, incoherent speeches.

I didn't know much about the 1921 race riot in Tulsa before  Joe Biden's Tulsa speech, so I did some Googling.

As best I can gather, the triggering event was the arrest of a young black man, a shoe-shine boy named Dick Rowland, on suspicion of having assaulted a young white girl in an elevator she was operating. Whether he did commit assault or not is unclear; the girl didn't press charges. The young man was taken in custody anyway, and rumors went round the town that he was going to be lynched.

That got both whites and blacks stirred up: whites congregated at the local courthouse, presumably to either see a lynching or participate in one, and armed blacks showed up to defend their guy. I'm not clear how well-armed the whites were.

A fight ensued, and the blacks got much the better of it. Twelve people were left dead, ten whites and two blacks. That infuriated whites. They generated a mob that burned the black part of town, until the state National Guard came in next morning, June 1st.

The butcher's bill is much disputed. Solidly confirmed fatalities were 39, 26 black and 13 white. [Report on Tulsa Race Riot of 1921, February 2001]That means one in three of those confirmed fatalities was white; and since the whole event was triggered by a fight that left ten dead whites and only two dead blacks, the word "massacre" is totally inappropriate; it was a race riot. I note in passing that one of the cops who took Rowland into custody was black.

Monday and Tuesday also marked the centenary of the 1921 race riot in Tulsa, Oklahoma. Our president actually went to Tulsa on Tuesday to give one of his embarrassing, incoherent speeches.

Our correspondent Kenn Gividen here at VDARE.com has put the Tulsa riot in the context of a low-level race war going on in the U.S.A from 1917 to 1923, with lethal race riots in Missouri, Pennsylvania, Kentucky, Texas, Florida, Illinois, and elsewhere. Hundreds of lives were lost, both black and white. The trigger in nearly every case, says Gividen, was black-on-white crime.

You would never know any of that from Joe Biden's Tuesday speech. Sample quote, concerning the Tulsa fatalities: "the likely number is much more than the multiple of hundreds. Untold bodies dumped into mass graves …". The grammar there is Joe's, not mine.

That's nonsense, of course. The whole speech was nonsense—a long recitation of the wickedness and malice of white people, and the terrible burdens endured by blacks that have held them back from accumulating wealth. His administration, said Joe, is going to correct all those injustices and bring black wealth up to the level of white wealth. Sure, Joe, sure.

My main reaction, reading through Biden's speech, was to wonder how much longer whites will tolerate all these libels, insults, and lies, and what will happen when we stop tolerating them.