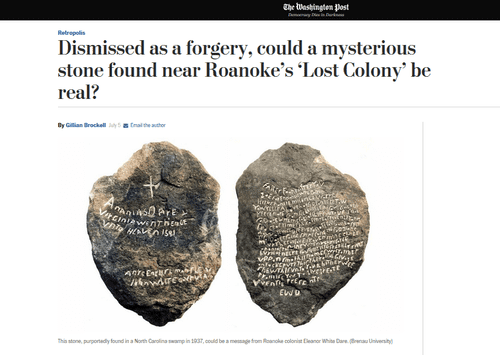 Washington Post reporter Gillian Brockell [Email her ] interrupts her coverage of the mystery of the Lost Colony and the death of Virginia Dare to call us here at VDARE.com “white supremacists”.

Lawler has a new book delving into the mystery. And, in a Washington Post column, he noted another group fascinated by the Roanoke story: white supremacists.

Starting in the 19th century, Dare’s daughter Virginia, the first English child born on this continent, became a symbol for white purity, Lawler writes. Tales told of her chasteness living among “wild” Native Americans; at the height of Jim Crow, a popular poem called her the “heir of civilization.” Even white suffragists, positioning themselves as more entitled to the vote than black men, invoked her name.

If the first Dare stone turns out to be real, that would mean Virginia Dare died when she was 3 or 4 years old at the hands of Native Americans. But Schrader isn’t concerned about what white supremacists will think of that.

“They’re not going to convince anyone but themselves with Virginia Dare. So I just don’t think there’s anything that they will gain,” he said.

“But I would like to gain something through this study,” he said. “I would surely like to know whether Eleanor White Dare had her hands on this stone about 500 years ago and left us a message.”

Dismissed as a forgery, could a mysterious stone found near Roanoke’s ‘Lost Colony’ be real?, July 5, 2018

It is simply a lie to say that Trump advisor Miller is a friend of Peter Brimelow--the two men have only met once, when Peter was debating something at Duke in 2007. Peter was debating, and Miller, who was a student at the time, was organizing the debate. It's also wrong to call us "white supremacists". We do have tags on Anti-White Hate Crimes and Minority Occupation Government, unlike the Washington Post, which tends to cover up the one, and advocate for the other.

The earlier column she's talking about is one Peter Brimelow replied to in May: 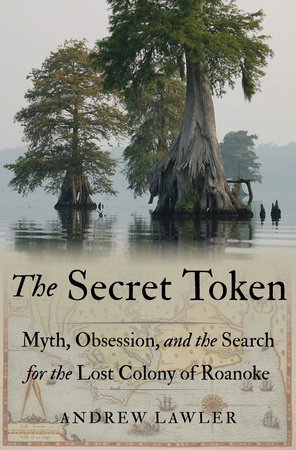 On Virginia Dare’s 430th birthday last August 18, I wrote #DareToCelebrate Virginia Dare’s Birthday! Will Her Statue Be Torn Down Next—Along With America? Right on cue, the Washington Post on Thursday morning carried How a child born more than 400 years ago became a symbol of white nationalism, subhead "Virginia Dare and the myth of American whiteness." [by Andrew Lawler, May 24, 2018 (alternative link)].

Even now, white supremacists and their allies claim Virginia Dare as their own. Peter Brimelow, a friend of former White House aide Stephen K. Bannon and current White House adviser Stephen Miller, founded the Vdare Foundation and vdare.com in 1999 to warn Americans about the danger posed by African and Asian immigrants. [What! No Hispanics?]

“I picked the name because I wanted to focus attention on the very specific cultural origins of America, at a time when mass nontraditional immigration is threatening to swamp it,” he wrote me. Brimelow originally is from Britain. One of his website’s postings notes that the Lost Colonists “simply found themselves outvoted, which is going to happen to us if we are not careful.” [Lawler, of course, does not link to the source of the quote, but it is from this interview with Alan Colmes, shortly before his tragic early death.]

Of course, what Lawler's book says about Virginia Dare's possible death, or possible "joining" an Indian tribe is a fascinating insight into how his mind works--and probably worth a column of its own.