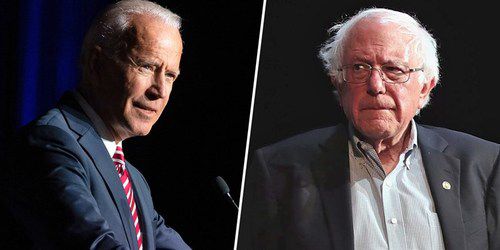 In 2018, a record turnout of women, minorities and young added 40 House seats to Democratic ranks and made Nancy Pelosi speaker.

This, we were told, is the new diversity coalition—women, people of color, millennials—that will take down The Donald in 2020.

So, how has the Democratic field sorted itself out half a year later?

According to the Real Clear Politics average of polls, two old white guys, Joe Biden, 76, and Bernie Sanders, 77, are setting the pace and have together corralled more than half of all Democrats.

There is a good chance the party of minorities, millennials and women will be led in 2020 by a white man who would be the oldest candidate ever nominated by a major party.

Biden and Bernie may be wheezing, but the old white boys are out in front of the pack.

The African American candidates, Harris and Cory Booker, are backed by only 1 in 10 Democrats. Julian Castro, the lone Hispanic, is at 1 percent, as is the Asian American Andrew Yang.

While the first primaries are half a year off, the odds today favor—after nominating Barack Obama twice and then Hillary Clinton—Democrats returning to the 20th-century traditional candidate—a seasoned white man.

Frontrunner Biden is benefitting from the fact that his closest rival, Bernie Sanders, is a socialist with a large and loyal following from his 2016 campaign. For Bernie sits on a huge pile of votes Biden may not be able to win, but which Bernie is denying to any other challenger.

Indeed, Bernie is becoming a problem for a whole host of Democrats.

If he defeats Biden for the nomination, he pulls Democrats a long way to becoming a U.S. replica of the British Labour Party of Jeremy Corbyn. Many moderate Democrats will not vote for a lifelong socialist who chose to spend his honeymoon during the Cold War in the Soviet Union.

Yet, as long as Bernie holds onto the votes he has, he prevents any candidate of color, any woman, or any new and fresh face from amassing enough strength in the polls to get within striking distance of Biden.

Bernie is thus today a de facto ally of Biden. He holds too few votes to take the nomination from Joe, but sufficient votes to stay in the race through the early primaries and deny any other Democrat a clean shot at Biden.

As of now, there are two lanes to the Democratic nomination—the centrist-moderate lane Biden occupies almost exclusively, and the left lane where Bernie leads but is being challenged by Elizabeth Warren.

Where does the Democratic race, with the largest number of entries in political history, almost two dozen, stand at the first turn?

Though Biden has more than a third of all Democrats behind him, he has slipped from his highest ratings and is under attack from his many rivals who believe a new day has come and who want old white men to go into retirement and get out of the way.

Biden is being hit for a variety of sins over a career that began in 1972. He voted to authorize George W. Bush to take us to war in Iraq. He led the fight for the 1994 anti-crime bill now viewed as tough on minorities. He left Anita Hill twisting in the wind when he was chairman of the Senate Judiciary Committee during the Clarence Thomas hearings. He denounced busing for racial balance back in the 1970s and 1980s.

Now the old plagiarism charges from his law school days and his presidential campaign of 1988 are being resurrected, since the Biden campaign distributed materials to back up his plan for combatting climate change with lines plagiarized from other sources.

This week, Biden's support of the Hyde Amendment which, for decades, has blocked federal tax funding for almost all abortions, is calling down the wrath of pro-choice Democrats who are both militant and many.

Another noteworthy development of recent weeks is the progress of Elizabeth Warren, due to the sheer number and appeal of her ideas for soaking the rich and using the revenue to create new entitlements in the name of "economic patriotism." Say what you will, she is talking issues.

Mayor Pete seems to have eased back from his earlier highs, and stalled. As for Beto, he may be flailing those arms around like a drowning man—because he is one. The bloom is off the rose. Beto seems frozen at 4 percent. There is truth in what Alice Roosevelt Longworth said of Tom Dewey's re-nomination in 1948 after having lost to FDR in 1944.

You can't make a souffle rise a second time.