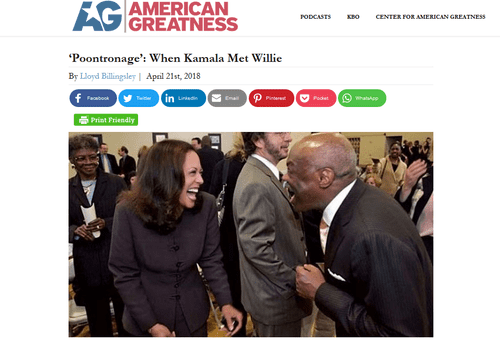 Kamala Harris Is Running for President to Apply Those Long, Hard Lessons in the True Nature of Politics She Learned Working Under Willie Brown

Willie Brown was the speaker of the California Assembly and then when term limited out of that job became mayor of San Francisco. The man is a political prodigy. With the demographics of 2020 he might well have been elected President in, say, 1992. Of course, back then, America could only take Slick Willie, not Sleaze Willie. But the times they are a changing.

But Willie Brown, now 84, has lined up a 1-2-3 punch for America. If his old girlfriend Kamala Harris doesn’t make the White House, how about his old pal new California governor Gavin Newsom? And if Newsom fails, what about his old babysitter, San Francisco mayor London Breed?

From the Orange County Register:

In 1990, California voters approved Proposition 140 — which imposed term limits on members of the California assembly and senate. It was ostensibly to return to a citizen legislature closer the people, but in reality, voters outside his San Francisco district wanted Assembly Speaker Willie Brown out, and this was the only way to do it.

While it’s true that Brown is no longer in elected office and is currently 84 years of age, his proteges have their hands firmly on the levers of power, both nationally and in California.

Let’s look at four of his top apprentices: the ex-girlfriend, the right hand, the baby sitter and the sommelier.