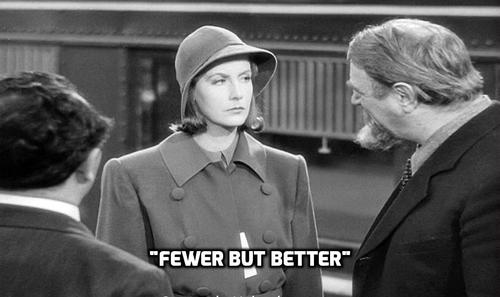 After The Midterms, Will There Be Fewer But Better Republicans?

In the 1930s film classic Ninotchka, Greta Garbo, playing a lady Commissar, is asked how things are in Russia. Her famous reply:

Very good. The last mass trials were a great success. There are going to be fewer but better Russians.

What this means, referring to the elections, is that if some House Republicans are losing their seats for not Making American  Great Again, then they may get the message of a much later movie, Blazing Saddles, in which Mel Brooks, as Governor LePetomane, says "We've gotta protect our phony-baloney jobs!"

As I've said before, even politicians incapable of seeing the light are capable of feeling the heat. See also  Pat Buchanan's column on the 2006 midterms: Are More "Thumpings" Needed?