Who Is Julian Castro And Why Is He Being Touted As The Next Minority President?

"Mark McKinnon is prepared to be more explicit about the long-term stakes. An early member of George W. Bush's inner circle in Austin, he knows Texas political talent when he sees it. "Julián Castro has a very good chance of becoming the first Hispanic president of the United States," he says flatly."

The wonderful thing about Chafets' article, however, is that the veteran reporter, who was born in Michigan but then served in the Israeli military and worked for the late Israeli prime minister Menachem Begin, appears to get his own joke about just how funny this Castro-for-Governor in 2014 / Castro-for-President in 2016 boomlet really is—even as he's helping concoct it.

A half-decade in the Begin government appears to have permanently cured Chafets of the clueless and humorless naiveté about ethnicity that pervades most American political discourse. (Chafets's 2007 article on the prosperous, fertile, and sociopathically clannish Syrian Jews of Brooklyn is particularly memorable. [The Sy Empire, October 14, 2007]) But, lacking Chafets' worldliness, most NYT subscribers will fail to notice his subtly irreverent attitude.

Yet, the way he checks off a long list of my own personal obsessions—SAT scores, identical twins (Julian's brother Joaquin—the one with the more lopsided head—is a Democratic state legislator), and the Bush dynasty's hopes for young George P. Bush to beat Castro to the White House as the first Hispanic President—suggests that Chafets knows the score. Maybe he reads my VDARE.com articles!

Julian and Joaquin Castro are the twin sons of Rosie Castro, a prominent San Antonio 1960s Chicana college militant. (They were born out of wedlock—their seldom-mentioned father is a community organizer turned teacher named Jesse Guzman.) 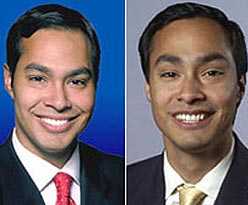 Rosie was a radical activist in the La Raza Unida Party co-founded by José Angel Gutiérrez, the son of a Texas doctor and author of A Chicano Manual on How to Handle Gringos. Allan Wall wrote about Gutiérrez in VDARE.com in 2004 in Who is Jose Angel Gutierrez—And What Does He Want?

Gutiérrez co-authored the 2007 book, Chicanas in Charge: Texas Women in the Public Arena, which devotes Chapter Nine to Rosie Castro.

Gutiérrez also proclaimed in a speech in San Antonio in 1969—around when Castro was first getting involved in his organization—"We have got to eliminate the gringo, and what I mean by that is if the worst comes to the worst, we have got to kill him." (He later claimed he was speaking about killing gringos in self-defense, although his firebreathing reconquista rhetoric inclines toward a rather aggressive view of self-defense.)

A quarter of a century later at UC Riverside in 1995, Gutierrez had switched from rhetoric of death to birth:

"We are migrants, free to travel the length and breadth of the Americas because we belong here. We are millions. We just have to survive. We have an aging white America. They are not making babies. They are dying. It's a matter of time. The explosion is in our population."

In 2003, Gutiérrez said: "The best advice I could give a 20-year-old: Get a job, get an education and go paint the White House brown as soon as you can."

Interestingly, despite being marinated in this climate of radical Chicano organizing while growing up, Mayor Julian Castro doesn't speak Spanish! Chafets helpfully points out:

"Although he pronounces his name 'HOO-lee-un,' he doesn't really speak Spanish—a fact he isn't eager to advertise. … A Mexican-American with statewide political aspirations needs to be able to do more than pronounce his name correctly."

"Early in his administration, Castro assigned his chief of staff, Robbie Greenblum—a Jewish lawyer from the border town of Laredo whose own Spanish is impeccable—to discreetly find him a tutor. Rosie Castro's son is now being taught Spanish by a woman named Marta Bronstein. Greenblum met her in shul."

(Which reminds me of a scene in Sam Lipsyte's new comic novel, The Ask. The narrator watches an Ivy League debate on the Middle East involving an American Likudnik intellectual: "One of the experts said the Palestinians were irrational and needed a real leader, like maybe a smart Jewish guy.")

Chafets, a veteran of Holy Land ethnic struggles over land and legitimacy, amuses himself by pushing the Castro family's buttons over San Antonio's Alamo:

“To Rosie, the Alamo is a symbol of bad times. 'They used to take us there when we were schoolchildren,' she told me. 'They told us how glorious that battle was. When I grew up I learned that the “heroes” of the Alamo were a bunch of drunks and crooks and slaveholding imperialists who conquered land that didn't belong to them. But as a little girl I got the message—we were losers. I can truly say that I hate that place and everything it stands for."

In contrast, Rosie's son Julian is almost as polished and even more opaque than Obama:

“'The Alamo?" he said. 'It's the largest tourist attraction in Texas. And tourism is one of San Antonio's major economic engines.' …

“'The curator called it a shrine.'

Castro considered that briefly, then nodded. 'There are people for whom the Alamo is a sacred place.' he said without any discernible emotion.”

Chafets raises the Affirmative Action/ quota question with the mayor:

"Joaquín and I got into Stanford because of affirmative action," Julián says. "I scored 1,210 on my SATs, which was lower than the median matriculating student. But I did fine in college and in law school. So did Joaquín. I'm a strong supporter of affirmative action because I've seen it work in my own life."

Chafets calls Castro "brilliant" but, strikingly, Castro's 1210 SAT is the same as George W. Bush's 1206 (they didn't round to the nearest ten back in W.'s day), so I guess that makes Bush "brilliant," too. Granted, that's likely smart enough to be a good President, but, out of 300 million people, can't we do a little better?

By the way, Castro did "fine" at Stanford while majoring in political science and communications. In contrast, Stanford's 2009 Heisman Trophy runner-up Toby Gerhart majored in management science and engineering while playing Division I football and baseball.

Let's look at a couple of more subversive facts that most NYT readers will fail to pick up on in Chafets's article.

Does San Antonio represent the future?

Chafets quotes Karl Eschbach, former official demographer of the state of Texas: "San Antonio is the city of the future, the avatar."

Yet Eschbach undermines his own contention by then pointing out how different San Antonio is from the many cities where illegal immigrants flock: "The Mexican-American population is about 60 percent of the city, but it is now several generations old. There is comparatively little immigration these days." A fair amount of San Antonio's Hispanic population is descended from middle class Mexican refugees from the Mexican Revolution of a century ago.

Why hasn't San Antonio, which is only 150 miles from the Mexican border, attracted many immigrants since then? Because, despite immense taxpayer expenditures at San Antonio's four large military bases, the heavily Mexican-American populace doesn't generate enough jobs to attract Mexicans. San Antonio is a pleasant enough place, but it must be be noted that (as in New Mexico) a large, settled Mexican-American population doesn't correlate with economic dynamism.

Moreover, despite all the national hype about Mayor Castro, he holds a largely meaningless job with few duties. "The daily business of San Antonio is conducted by a professional city manager," Chafets notes. Indeed, San Antonio's city manager is paid $275,000 annually, while the mayor earns about $3,000. Not surprisingly, only 9.83 percent of San Antonio's registered voters bothered to vote in the Mayoral contest last year.

The reason Castro can afford to use this impressive-sounding but nugatory office as a launching pad for runs at the governor's mansion and / or the White House is because powerbroker Mikal Watts, a rich personal injury attorney and major Democratic donor, gave the Castro twins a large sum, ostensibly for referring a car crash case to him. (See Whispers about Castro's referral of case grow louder,by Karisa King in the San Antonio Express-News, March 22, 2009.)

So, why is the NYT getting so excited over a smooth young man with virtually no record of accomplishment? (Hey—does that remind you of anybody?)

There simply isn't much competition for the title of Great Hispanic Hope. And it's not just a shortage of talent. Chafets points out one problem traditionally holding back the long-heralded tidal wave of triumphant Hispanic politicians that will engulf Real Soon Now: corruption.

"It had been about a dozen years since another brilliant young man from San Antonio, Henry Cisneros, regarded by many as the emerging national leader of the Hispanic wing of the Democratic Party, lost his political future in a sex-and-money scandal. Cisneros's implosion left an opening."

Cisneros, who played a disastrous role in the Mortgage Meltdown as Bill Clinton's Secretary of Housing and as a director of Angelo Mozilo's Countrywide Mortgage, has known Rosie Castro since kindergarten and taken an avuncular interest in the success of her sons.

"For a while, Bill Richardson, the governor of New Mexico, and Antonio Villaraigosa, the mayor of Los Angeles, were Great Hispanic Hopes, but scandals eventually knocked them out of contention too. … 'People look at him and say, "Finally, we have somebody who won't screw up."'"

Chafets clearly gets the joke. But do many of the poor dumb American readers of the New York Times, their minds dulled by years of practicing crimestop on their own thoughts, even notice how funny his article is?

Funny…except for the fact that that other race-transcending blank slate got hyped all the way to the White House.