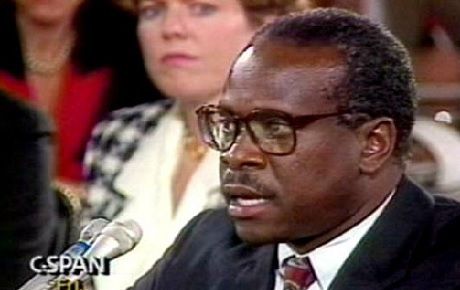 Biden's Anita Hill Regret Is That He Failed To Participate In The Lynching Of A Black Man: Clarence Thomas

What Joe Biden is saying in his recent speech about the 1991 Anita Hill testimony to the Senate Judiciary committee about Clarence Thomas is that Biden wasn't hard enough on black man falsely accused by a woman.

Clarence Thomas himself referred to this in his statement to the Judiciary Committee (addressing Senator Biden himself) as a "high-tech lynching". If you don't remember it, it's not that different from what Brett Kavanaugh went through—an obvious lie told by a female Democrat to block a Republican nominee to the Supreme Court.

In 2007, Jeffrey Toobin wrote a piece called Unforgiven Why is Clarence Thomas so angry?  for the New Yorker in which he described Thomas's conservative jurisprudence as speaking  "power to truth." That was a switch on

Anita Hill's mendacious claim to have been "Speaking Truth To Power"—on behalf of the majority party in the Senate at the time.

At the time I wrote that what Toobin called speaking "power to truth" is no more than strict constitutionalism, and a belief that criminals, if guilty, should be punished.

What Toobin was objecting to is who Thomas is believed to be mad at: Democratic Senators, and liberal journalists like Toobin. (And Anita Hill, of course.) After what he went through in his confirmation hearings, and in the press since, I don't blame Thomas for being mad at any of those people, possibly including Joe Biden.

Judge Thomas wasn't, as far as I know, guilty of saying bad things to Anita Hill, and the "English jurisprudential culture" Biden complains of is about the presumption of innocence. However, what I want to knows is, this: When Biden says  that the "white guys" of the Judiciary Committee "didn’t fully understand what the hell it was all about", does he realize that what he's saying is that his fellow white male Senators should have believed the stereotype that black males frequently take advantage of young black woman?