A rare piece of good news from Europe has appeared regarding its confrontation with muslim immigration: six nations have enacted laws that partially or fully ban face veils in public.

It has been a long time coming to resist the noisy shaming strategy of the invaders, but the political climate has changed a bit over the last few years. Perhaps wimpy Europe may be discovering the resolution to defend its own culture.

In addition, Islamic style “modesty” can be a convenient disguise for crime and jihad terror, as Daniel Pipes has brilliantly displayed in a list started in 2002 and updated this month — Niqabs and Burqas as Security Threats.

Burqas can be an aid to jihadist intimidation and the demands of Islamic invaders.

A few years ago, the Philadelphia “burqa bandit” robbed at least five banks disguised by a handy full body covering. Pictured below, the robber has a rather masculine build. 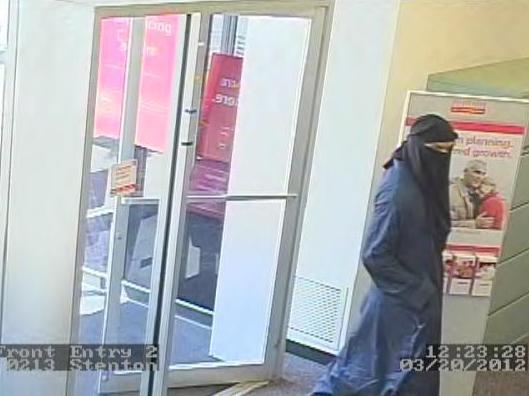 The Washington Post story was reprinted by the Sydney Morning Herald in Australia, where Muslim immigration has been problematic:

Washington: Earlier this month, Denmark became the fifth country in Europe to introduce a ban on face coverings in public places. The policy is widely viewed as being targeted at Muslim women who wear veils such as the niqab.

Despite protests in the capital, Copenhagen, police have started enforcing the law in earnest. On August 3, a 28-year-old wearing the niqab, which covers the entire body except the eyes, was attacked by another Danish woman who tried to pull her veil off, the Guardian reported. Police fined the Muslim woman $US156 ($214).

Legislation around full-face veils has grown increasingly common in Europe, particularly in the past three years. Six countries have now passed nationwide laws that partially or fully ban face veils in public places. The latest is the Netherlands, which voted in June to partially ban face veils in locations such as schools and hospitals, but not on public streets.

Several other European countries, including Spain and Italy, have banned them in individual cities and towns, and even more have reviewed proposals for bans at a local or national level.

Widespread calls for legislation outlawing face veils in public places started in France, which in 2011 became the first European country to introduce a nationwide ban. At the time, French President Nicolas Sarkozy argued during a state-of-the-nation address that the burqa — a head-to-toe covering with mesh screening the eyes, mainly worn in Afghanistan — was a “sign of subservience and debasement.”

“I want to say solemnly, the burqa is not welcome in France. In our country, we can’t accept women prisoners behind a screen, cut off from all social life, deprived of all identity. That’s not our idea of freedom,” Sarkozy said to rapturous applause from lawmakers, the Guardian reported.

Another common justification for the ban is that face veils conceal the wearer’s identity, posing a security threat. (Continues)