Of Mice and Men: ”Spiteful Mutations” Look Bad For The West

Human beings are similar to mice: both are highly social pack animals. And experiments on mice can tell us a great deal about the physical and social health of human beings. Unfortunately, a recent article in Evolutionary Psychological Science has bleak news for the future of Western civilization. Genetic mutations are increasing, intelligence is decreasing and modern society itself is headed for of collapse.

Michael Woodley of Menie (the “of Menie” is traditional among Scottish landed families) is a research fellow at Center Leo Apostel for Interdisciplinary Studies at the Vrije Universiteit Brussel in Belgium and a scientist with Technische Universität Chemnitz. He is well known as a scholar of human intelligence. 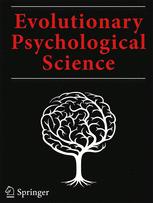 It’s a re-interpretation of a much older study involving mice, carried out by American ethologist (animal behaviorist) John B. Calhoun. Calhoun’s arresting research—Death squared: The explosive growth and demise of a mouse population [Proceedings of the Royal Society of Medicine, January 1973]—charted the rise and fall of a mouse population living under conditions in which there was no Natural Selection. Woodley of Menie’s team argues human beings are living under the same conditions today.

Two hundred years ago, human beings were subject to harsh Natural Selection. People born with mutant genes, those who had a poor immune system, simply didn’t grow old enough to procreate. Forty percent of us died before we reached adulthood. This is now down to negligible levels in developed countries.

Accordingly, Woodley of Menie and his team aver that Calhoun’s experiment–which created a “Mouse Utopia”–will provide a good indication of what will happen to us. In Calhoun’s “Mouse Utopia” at the University of Maryland, there were no predators, no bad weather, no possibility to escape, and no epidemics, because the mice were ensured to be healthy when they entered. There was a huge amount of space. It was, in other words, paradise for mice.

At this point population growth began to slow down, just as happened in Western countries in the early Twentieth Century. Doubling then only occurred every 145 days. And, just as in the West, Calhoun started to see more and more elderly—and even senile—mice.

By day 315, Calhoun started to notice interesting behavior changes in the mice. More and more males became what he called “the beautiful ones.” These effete males would make no attempt to fight or copulate with females. They simply spend their time washing each other and eating.

By contrast, female behavior became increasingly aggressive: they would attack males, throw their offspring out of the nest too young, attack their young, and actively avoid sex.

By day 600, fertility was not only at below replacement levels (as it is now in the West) but no new-born mice survived beyond weaning, because their mothers weren’t looking after them properly.

The last conception was on day 920. Autopsies on females aged 334 days or over revealed that only 18% had ever conceived whereas wild mice would have had at least 5 litters by that age. In May 1973, 1720 days after colonization, all of the mice were dead. 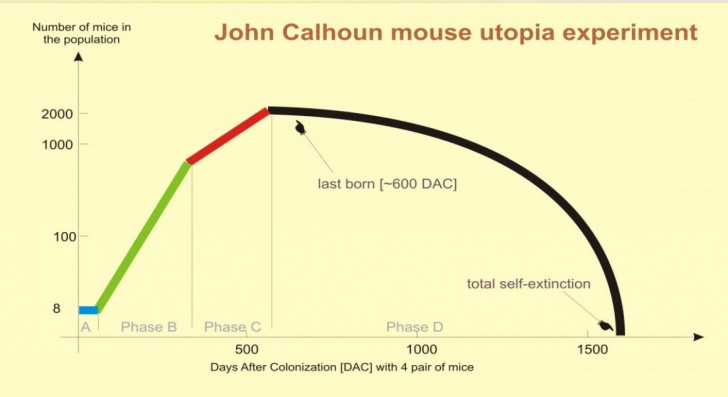 They argue that all health problems, both physical and mental, are interrelated. This is because they all reflect the same phenomenon: what the team call “high mutational load.”

For example, consider autism. It is definitely a result of mutant genes because it is more likely to develop the older your father is, meaning it a result of defective, mutant sperm. Autism is associated with all manner of other mental and physical health problems.

The Woodley of Menie team further argue that the brain is extremely sensitive to mutation, because it is fantastically complicated. 84% of our genome relates to the brain. This means that even a small number of mutations can have a massive impact on behavior. The effect is magnified in social animals like mice and men behavior is learned and mutations can interfere with social processes which allow adaptive behavior to be correctly taught.

Woodley of Menie calls these “spiteful mutations.” And as the carriers grow in number, they can pressure even non-carriers to conform to their maladaptive behavior.

For example, childless women may encourage other women not to have children. Mothers are shamed as “failures” because they didn’t focus on a career. Even non-carriers of maladaptive behavior are impacted.

In other words, mice have key evolved instincts which allow them to survive. Every generation, some mutant mice—who lack these instincts–are born. But their maladaptive instincts—no desire to breed or fight, or zero maternal instinct—are a product of mutation. They also carry other mutations, leading to poor immune systems or physical weakness. So they die young, and don’t pass on their mutant genes.

But in Calhoun’s mouse experiment, these mice survived and had children. The children survived and more and more mutations built-up until the potentially normal mice were a tiny minority who didn’t have the chance to learn appropriate behavior or how to relate to other mice.

And, ultimately, almost all the mice were mutants. The rest were totally maladapted and the population died out.

This “Mutational Meltdown” is happening in the West. The authors present clear evidence for it: huge spikes in autism and genetic disorders. This could be extended to include the prevalence of eating disorders, homosexuality, sexual identity problems, and the desire to not have children.

“Spiteful mutations” undermine things like religion, which is little more than a way of promoting evolutionary imperatives. For example: go forth and multiply, cooperative with each other, repel the invader.

But we now have liberal religion, which is basically post-modernism plus a vague religious sense. It reflects the increasing number of people whose instinct is to destroy their own genetic interests.

Humans have evolved instincts. In the past, those with mutant genes causing them to lack them died young without passing on their genes. Now, this is not the case. They live to adulthood, often pass on their own genes and, even they don’t, they still alter the carefully selected nature of the group.

Put simply, we are living in a society increasing composed of and dominated by mutants. And they can be tentatively identified by the fact that they reject the behavioral norms and views which were the unquestioned norm only a few generations ago.

But there is crucial difference between Mouse Utopia and the West. We are the scientists who are maintaining our own utopia. There is a growing body of evidence that intelligence is decreasing. Eventually we won’t be intelligent enough to sustain utopia and we will collapse back to pre-industrial levels of Natural Selection.

The current model of society, like the “Mouse Utopia,” is heading to collapse.

The only questions are whether we can turn it around.

And, if we can’t, what will succeed it.