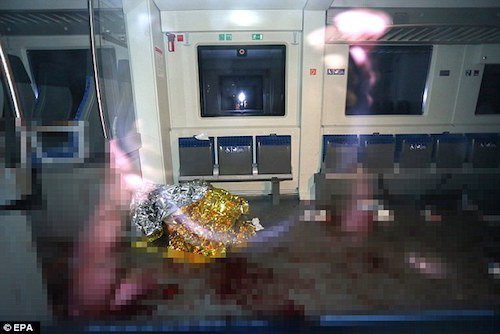 Rumors are that the terrorist who chopped up a bunch of people on a train in Germany with an ax today was a 17-year-old Afghan. I don’t have confirmation for that, however.

Update: the BBC gives the source as a journalist with ZDF, which is kind of like the PBS of Germany.

Question: Is the chopper a Merkel Youth?

Answer: Yes. From the Mirror:

German media reports the 17-year-old axe attacker had been living with a German foster family after arriving in the country as a refugee from Afghanistan. The boy is reported to have been unaccompanied when he travelled to the country in the last year.

It’s almost as if Afghanistan isn’t sending their best …

But I do know for sure that we need Axe Control Now. End axe violence!

Several injured in attack on train near Würzburg, southern Germany

German police have shot dead a 17-year-old Afghan refugee in Würzburg. The teenager injured four people after launching an attack on a commuter train in Bavaria using a knife and an axe. …

Bavarian Interior Ministry Joachim Hermann confirmed in a televised interview that the teenager boarded the train in Ochsenfurt, where he had been staying with a foster family after traveling unaccompanied to Germany to seek asylum.

The Afghan national reportedly shouted “Allahu Akbar” before launching the attack, wielding a knife and axe.

“The perpetrator was able to leave the train, police left in pursuit and as part of this pursuit, they shot the attacker and killed him,” a police spokesman said.

The motive of the attack was not immediately clear.

The Merkel Youth’s motive remains a riddle, wrapped in a mystery, inside an enigma.

Seriously, if Trump wanted a quiet Republican National Convention, he could just make it one long series of moments of silence in memory of victims of The Right Side of History: German train passengers, Baton Rouge cops, Nice promenaders, the Tennessee newspaper delivery lady, Dallas cops, Orlando gays, etc etc …