The Rise of the West and the Fall of Cousin Marriage

The Churches’ Bans on Consanguineous Marriages, Kin-Networks and Democracy

Abstract: This paper highlights the role of kin-networks for the functioning of democracy: countries with strong extended families as characterized by a high level of cousin marriages exhibit a weak rule of law and are more likely autocratic. To assess causality, I exploit a quasi-natural experiment. In the early medieval ages the Church started to prohibit kin-marriages. Using the variation in the duration and extent of the Eastern and Western Churches’ bans on consanguineous marriages as instrumental variables, reveals highly significant point estimates of the percentage of cousin marriage on an index of democracy. An additional novel instrument, cousin-terms, strengthens this point: the estimates are very similar and do not rest on the European experience alone. Exploiting within country variation of cousin marriages in Italy, as well as within variation of a ‘societal marriage pressure’ indicator for a larger set of countries support these results. These findings point to a causal effect of marriage patterns on the proper functioning of formal institutions and democracy. The study further suggests that the Churches’ marriage rules – by destroying extended kin-groups – led Europe on its special path of institutional and democratic development.

… This research advances the hypothesis and empirically demonstrates that the strength of extended kin-groups (as proxied by cousin marriage) is most likely at the core of the large developmental differences in institutional quality and democracy across countries: excessive reliance and loyalty, nepotism, violent conflict and other contingencies of strong extended kin-groups impede the proper functioning of formal institutions. Furthermore, this study suggests that a specific historic event – the Church ban on consanguineous marriage (marriage of the same blood) – constituted a critical juncture leading Europe to a special path in its economic and institutional development.

The idea that extended kin-networks play a decisive role in institutional and economic outcomes is old. The early Christian theologian St. Augustine (354 – 430) propagated a ban on consanguineous marriages by pointing out that marrying outside the kin-group enlarges the range of social relations and “should thereby bind social life more effectively by involving a greater number of people in them” (Augustine, 1998, p. 665). For Weber (1958), the disappearance of extended kin-groups in Europe is one of the central preconditions for the development of public law and the political state (see also Goody, 1990 on Weber’s view). 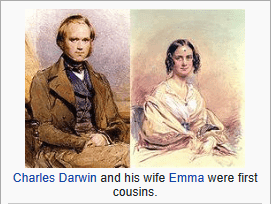 On the other hand, Protestantism wasn’t always against cousin marriage: e.g., Charles Darwin married his Wedgwood first cousin. But I don’t know how common this was. I believe that it was American eugenicists who launched the modern aversion toward cousin marriage in Protestant countries.