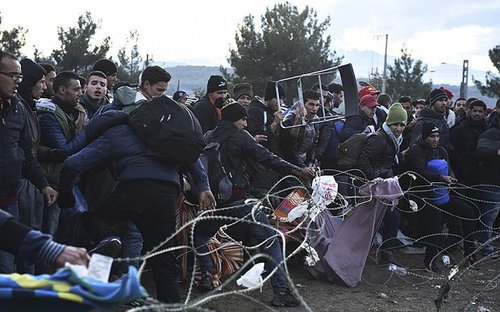 Why Is An Israeli Organization Helping "Refugees" Invade Europe?

The remarkable webzine The New Observer has emerged as an invaluable aggregator of news stories documenting aspects of the immivasion of Europe and America. Israel Officially Aids 3rd World Invasion November 22, 2015 supplies a disturbing story about the activities of IsraAID an Israeli parastatal, which boasts Israel’s Ministry Of Foreign Affairs as a Donor.

To the refugees it doesn’t matter that we’re Israeli by Abigail Klein Lachman Israel21c September 20 2015 is a tear-jerker about IsraAID’s work to facilitate the current invasion of Europe (which, it notes inadvertently, is not merely from Syria):

In addition to Iraq and Syria, there are refugees from countries including Afghanistan, Pakistan, Sudan and Somalia. Most of the 10 IsraAID staffers and volunteers currently on the ground in Greece and Serbia/Croatia are Arabic speakers, including an Arab-Israeli nurse, social worker and psychologist...

The story concludes by quoting an IsraAID operative gloating

“We’re showcasing Israel in such an incredible way”

As The New Observer points out by linking to a dramatic photo essay Israel’s Chilly Reception for African Asylum Seekers by Main Fezehai The New York Times Oct 31, 2015 this enthusiasm for 3rd world immigration is totally absent when it comes Israel itself.

We at VDARE.com have long admired Israel’s staunch defense of her national integrity - see for instance

• Only In Israel: Exodus of Illegals Accelerates; Border Fence Working (Of Course).

• Romney: “I Intend To Make Life Miserable For Illegal Immigrants Until They Realize Their Place Is Not Here”

• And our Netanyahu For President series.

But contemplating Angela Merkel’s abrupt and mysterious decision to muslimize Europe (in which I am convinced bribery has played a large part) and the evidence here that the Israel approves of the immivasion of Europe the thought occurs: are these two sides of the same coin?

Could promoting this migration be intended to siphon aggressive young men out of Israel’s neighborhood as well as exact a tribal revenge on European Christendom?

It is not comforting to read As Anti-Refugee Sentiment Builds, Jewish Agencies Push for Settlement By: Melissa Apter and Suzanne Pollak jewishexponent.com November 25 2015

WASHINGTON — As debate rages in Congress over the settling of Syrian refugees in the United States, Jewish agencies and community members are stepping up to assist those who have made it to our shores…

Rabbi Lance Sussman, senior rabbi of Reform Congregation Keneseth Israel in Elkins Park, is a trustee of IsraAID, which aims to “help Israel, help humanity.”…As a trustee on the organization’s North American board, Sussman is trying to build up the organization and solicit donations for the lifesaving work IsraAID conducts in Jordan, Turkey and the shores of Greece.