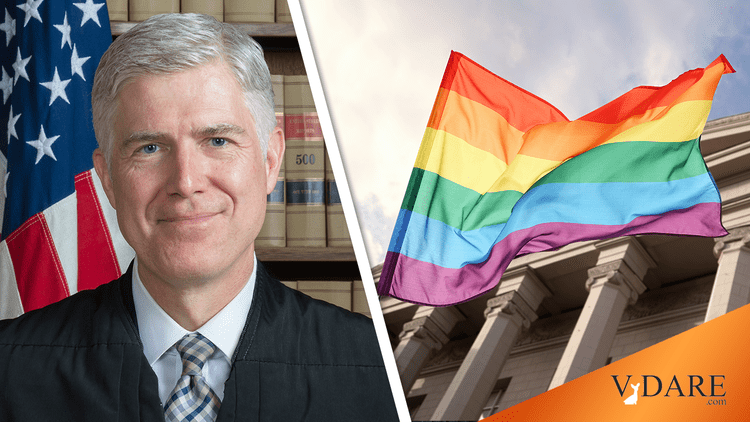 Awful Gorsuch (!) Decision On Gay "Civil Rights" Says 1964 Law MEANT To Protect People Who Had Gay Sex (Which Was Illegal)

A decision by the Supreme Court held that the 1964 Civil Rights act, which prohibits discrimination on account of sex, i.e. male and female, also prohibits discrimination on account of gayness, i. e., sexual activity, or what the lawmakers of 1964 would have called "sexual perversion." (At that time gay sex was more or less illegal in every state in the Union.) The worst thing about this decision is that it was written by Trump appointee Neil Gorsuch, who claims it's a "textual" decision.

Carrie Severino, who co-wrote a book on the Kavanaugh nomination, writes:

Justice Scalia would be disappointed that his successor has bungled textualism so badly today, for the sake of appealing to college campuses and editorial boards.

This was not judging, this was legislating—a brute force attack on our constitutional system. (1/x)

While the question of whether to amend Title VII to add more categories may be a difficult one as a matter of policy, the question of the Court’s role on this issue was an easy one: Allow the people to decide the issue through their elected representatives. (2/x)
Carrie Severino

Today six judges acting as advocates opted to rewrite the statute themselves, short-circuiting the legislative process and in the process denying the people a decision that should be theirs to make on a major issue.
Have no doubts about what happened today: This was the hijacking of textualism.

You can't redefine the meaning of words themselves and still be doing textualism. This is an ominous sign for anyone concerned about the future of representative democracy. (end)

When Gorsuch was nominated, John Reid was dubious here at VDARE.com.

I pointed out the good side: Neil Gorsuch: Trump Picks White Male Old Stock American For Supreme Court, by James Fulford on 01/31/2017.

This is still the good side: Trump Appoints Normal Judges, Washington State Appoints Disabled Black Lesbian From Trinidad  by John Derbyshire on 04/26/2020.

Gorsuch has done some good on the Supreme Court, but this is pretty awful.