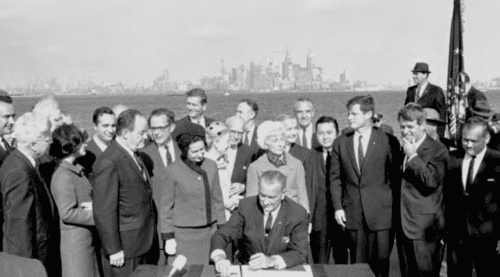 A Reader Reports On The Treason Lobby's 1965 Commemoration

Re: Jared Taylor’s article The Great Replacement: The 1965 Immigration Act And The Think Tanks

From: Christian Ness [Email him]

Many other commemorations of the 50th anniversary of the signing of the Immigration and Nationality Act of 1965 were held in and around Washington D. C. I attended several.

This commemoration was held September 30 in a splendid hall of the Dirksen Senate Office Building. Its dark wood and quiet elegance was back dropped by a large photo —fifteen feet by 25 feet or so—of President Johnson, surrounded by all-white politicians and dignitaries, signing the 1965 Act in the shadow of the Statue of Liberty.

The Migration Policy’s panel, moderated by Doris Meissner,  included Mark Updegrove, historian and Director of the LBJ Presidential library, who was senatorial in dress and demeanor.   He gave a great detailed description, including an audio recording, of LBJ arm-twisting to get support for the 1965 Act.   He reported that LBJ used 72 pens in the signing, giving the first to Everett Dirksen.

Stunningly, when the moderator later asked the audience for questions, Mr. Updegrove butted in and said he would ask a question.  Transforming into a banshee, he screamed into the microphone “Why can’t we overcome xenophobia?”

Panelist Tom Gjelten is the author of a new book, A Nation of Nations, whose title is strikingly similar to A Nation of Immigrants published in 1958 by the B’nai B’rith Anti-Defamation League as part of the National Jewish Community Relations Advisory Council’s Isaiah Minkoff’s project to change America’s immigration law.

(According to J. J. Goldberg in Jewish Power, a book its publisher describes as “widely acclaimed in both the mainstream and Jewish press” Minkoff spearheaded a massive coalition that brought about the 1965 Act.  Starting in 1955, the coalition lobbied, leafleted, planted articles and held public meetings on “the racist nature” of the existing immigration quota system).

An audience member asked if there was any evidence to counter the argument that Minkoff’s real goal was to create a pluralistic, multicultural America that, in Minkoff’s view, would be safer for Jews.   Doris Meissner seemed stunned and bemused by the question.

Panelist Paul Taylor offered that the “melting pot” was a poor metaphor for America and that “mosaic” might be better.

Panelists said the 1965 Act was part of the Civil Rights movement i.e. driven by egalitarian emotion.

Alex Nowrasteh, Cato Immigration Policy Analyst, started off by cheerily proclaiming that he and another panelist were successful in keeping E-Verify from becoming mandatory.  (E-Verify was established in 1997 to prevent undocumented immigrants from obtaining employment illegally in the United States).

Panelist Erika Lee, Director of the Immigration History Research Center at the University of Minnesota (her great-great grandfather was a miner in the California gold rush) claimed that the 1898 Wong Kim Ark Supreme Court decision resolved birthright citizenship in favor of illegal aliens and their children. Ms. Lee focuses in her teachings on the mistreatment of Asians by Americans.  So it is not surprising that she claimed that Wong Kim Ark was always treated badly in the USA and in 1932 he permanently left the USA and returned to China—implying that life in the USA was just too miserable for Wong Kim Ark, not that he just wasn’t that into being an American.

Ms. Lee did say, along with other panelists, that there was little research into what the impacts of the 1965 Act would be and that the next proposals should be carefully analyzed before enacting.

After the session, a fellow of Asian descent, age 25 or so, fell all over himself  lauding the attractive Ms. Lee, who was sporting a gigantic diamond ring, telling her how much he admired her work.  She ate it up.  If his words had been calories, she would have gained 25 pounds on the spot.

The moderator Phillip Wolgin, Center for American Progress was immoderate in calling upon audience members—seemingly avoiding anyone who appeared to be a mainstream American. Thus first to be called was an elderly Chinese lady who, with disjointed English, went on an uninterrupted tirade about how awful Americans are, and how they hire their own.

The elite D.C. satellite had a “week of free events” “commemorating the 50th Anniversary of the Immigration and Nationality Act of 1965 and the Civil Rights Movement.”

Interestingly, Chinese groups captured most of the events, as shown by a travelling exhibit “Remembering 1882: Civil Rights under the Shadow of the Chinese Exclusion Act,” a panel on the role of African Americans and Chinese in the Civil War, multiple showings of the movie “Through Chinatown’s Eyes: April 1968,” and a three-hour book lecture / reception for Martin Gold’s book Forbidden Citizens: Chinese Exclusion and the U.S. Congress: A Legislative History, although it was published over three years ago.