Ann Coulter On Impeachment: Do Republicans Have More Fun?

Earlier, by Ann Coulter: Trump Vs. The Clintons: Who Has ACTUALLY Been Abusing Women? 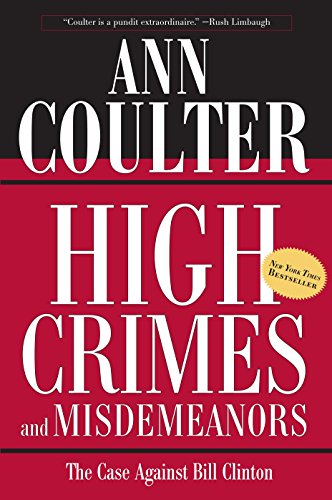 Impeachments aren’t what they used to be. Today, young people are supposed to be excited that the president withheld taxpayer money from Ukraine—a half-billion-dollar foreign aid package that ticks off most Americans under any circumstances, going to a country notable for not being our country, and for a purpose other than the wall.

Now, Bill Clinton—that was an impeachment!

First, there was the corpus delicti of the case—a White House intern, Monica Lewinsky, earning her “presidential kneepads” by sexually servicing the president.

The telephonic evidence wasn’t about “Burisma Holdings Limited” or a Ukrainian prosecutor whose name no one can remember. It was tapes of Monica blathering on and on about servicing the president, including such fascinating items as:

On Jan. 17, 1998, The Drudge Report broke the intern story. The following week, Clinton gave an impassioned, finger-wagging, squint-eyed address to the nation, saying:

“I want to say one thing to the American people. I want you to listen to me. I’m going to say this again. I did not have sexual relations with that woman—Miss Lewinsky.”

By late summer, it turned out Monica had, in fact, kept the long-rumored “blue dress” with Clinton’s semen on it. The president was ordered to produce a sample of his DNA. It was one of many presidential “firsts" under Clinton.

A few weeks after producing his DNA, Clinton addressed the nation: "Indeed, I did have a relationship with Miss Lewinsky that was not appropriate."

Contrary to the bilge put out by the legacy media ever since their baby boomer, draft-dodging, pot-smoking, Fleetwood Mac-listening president was caught committing numerous, serious felonies, Clinton was not impeached for having a sexual affair (as hilarious as that was).

He was impeached for his repeated perjuries and subornation of perjury in a citizen’s private civil rights suit against him.

In May 1994, Paula Jones had brought a lawsuit against Clinton under the 1964 Civil Rights Act—once considered more sacred than any other legislation passed in the 20th century. That law prohibits discrimination on the basis of sex, including sexual harassment.

Jones alleged that, when Clinton was the governor of Arkansas—a phrase that still has a rather disreputable ring to it—he had summoned her, a lowly state employee, to his hotel room, dropped his pants and said, “Kiss it.”

To prove her case, Jones had a right to collect evidence to show that he had made similar sexual advances toward other female underlings. This had been expressly confirmed by the Supreme Court’s May 27, 1997, unanimous ruling that her lawsuit could proceed without delay. (The court’s 9-0 ruling surprised every TV lawyer, but one.)

So Clinton lied. He lied to the country, to his Cabinet and, most important, to the court—under oath in a deposition presided over by federal judge Susan Webber Wright. (I’d add “to his wife,” but no one thinks she was fooled.)

During his deposition on Jan. 17, 1998, for example, Clinton gave these answers to Jones’ lawyers:

Q: At any time were you and Monica Lewinsky alone together in the Oval Office?

Q: At any time have you and Monica Lewinsky ever been alone together in any room in the White House?

A: I have no specific recollection.

The president had had Monica perform oral sex on him in the White House a half-dozen times, including while he was taking calls from members of Congress. On Easter Sunday, he'd sodomized her with a cigar. He’d just spent months orchestrating a massive campaign to ensure Monica would submit a perjurious affidavit to Jones’ attorneys, such as asking Vernon Jordan to arrange a job for her at Revlon in New York City.

To say that he “had no specific recollection” of being alone with Monica is blinding, inarguable perjury.

Liberals sneer that Clinton merely “lied about sex.” If it’s OK to “lie about sex,” then we can’t have laws about sex. No laws against sexual harassment, rape, child molestation, human trafficking, prostitution. (Oh sorry—I think I just listed the entire Democratic platform.)

Those are all “just about sex”!

That’s why Clinton heatedly insisted that his testimony was “legally accurate,” saying, “It depends on what the meaning of ‘is’ is.” Perjury is a very serious crime.

The Supreme Court sure thought so! (This is in contrast to the entire Democratic Party: Not a single Democrat voted against Clinton in the Senate impeachment trial, despite his screamingly obvious perjuries.)

Clinton’s first State of the Union address following his Senate trial happened to be the last one of his presidency. The entire Supreme Court boycotted the event. Even the two justices he’d appointed! The court’s gigantic message to the felon was conveyed to the sergeant-at-arms in a terse, two-sentence note expressing regrets.

We can’t have a legal system if people feel free to lie under oath.

Idiots keep announcing on TV that all impeachments are “political,” which they understand to mean “partisan.” No—that’s not what it means.

As Alexander Hamilton explained in Federalist 65, impeachable offenses are “political” in the sense that they are attacks on the body politic—“injuries done immediately to the society itself.”

It doesn’t get much more injurious to a “nation of laws, not men” than to have the president of the United States perjuring himself over and over and over again in a citizen’s Supreme Court-approved lawsuit against him.

You see, kids? That was an impeachment!