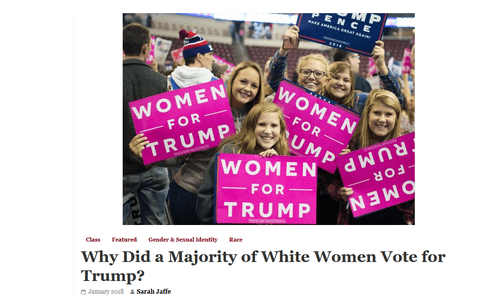 See, earlier, by Pat Buchanan: Has Trump Found The Formula For 2020?

An acronym I’ve seen repeatedly used by political analysts is “WWC” which stands for “White Working Class.” Both Republicans and Democrats recognize that the WWC is the Republican’s key to electoral victory and President Trump has connected with those voters like no other Republican before. This has put political victory out of reach for the Democrats in areas that are primarily populated by the WWC (i.e., usually rural areas or blue collar suburbs).

But Democrats have been able to make gains in upscale suburban and/or exurban regions by connecting with college-educated white women voters. Not only were white college-educated women the only category of white voter that Trump narrowly lost to Clinton in 2016, it was this demographic which contributed to the Democrats winning the House this past November.

I am theorizing that President Trump, whose political instincts have proven far more adept than most want to give him credit for, is aware that his weak numbers among college-educated white woman must improve for him to stay competitive against the Democrat’s Coalition of the Fringes. Instead of engaging in fruitless minority outreach which has failed Republicans for decades, President Trump is intentionally pursuing college-educated white woman with policies like “expanded maternity leave” and feel-good mushiness about “ending AIDs” and similar such fluff which only someone with high estrogen levels would care about. This is actually a smart strategy as Trump’s numbers with those voters are not as bad as the mainstream media would lead you to believe.

Yes, Trump did lose college educated white women to Clinton in 2016 by 51-45% but Romney won that demographic four years earlier by 6 points which shows this is a winnable constituency for a Republican. Also, if you take out millennial women from Trump’ s 2016 results, he actually would have won college educated white women so the potential is there to improve those numbers.

Age was the biggest predictor of white women’s support for Clinton—Millennial white women were the only ones Clinton won, 51.8 to 39.5, and Trump’s percentage went up with each age bracket, taking 58.2 percent of white women over sixty-five. (Why Did a Majority of White Women Vote for Trump? By Sarah Jaffe, New Labor Forum, CUNY School of Labor and Urban Studies, January 2018)

I know a lot from our sphere were disappointed that President Trump didn’t deliver a SOTU speech filled with red meat for immigration patriots but that was because not all college-educated white women are like Ann Coulter (although I wish they were). This might be the President’s new approach through 2020 where he tries to retain his strength among the WWC plus add college-educated white women into his base of support. And, before you start complaining, isn’t a political candidate who unifies whites into a voting bloc that wins elections what we’ve been wanting for years?!